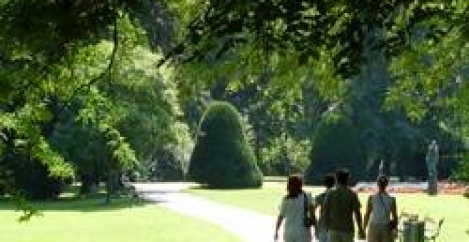 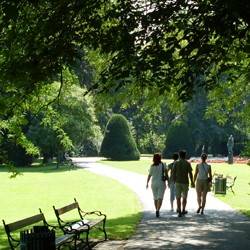 The idea that spending recreational time in natural settings is good for our health and wellbeing is hardly new. Parents have been telling their kids to “go play outside, it’s good for you” for generations. Now, colleagues and I have published a study in the journal Scientific Reports which suggests that a dose of nature of just two hours a week is associated with better health and psychological wellbeing, a figure that applies to every demographic we could think of (at least in England).

So why do we need research into this? Although our parents’ common sense observation is true in the general sense, the devil – as always – is in the detail. For instance, it’s less intuitively obvious exactly how much time in nature we need before we experience the benefits, whether we can have “too much of a good thing”, whether it’s better to have lots of smaller encounters or one big one, whether parks, beaches and mountains offer similar benefits, or whether nature exposure is more important for some people than others.

We wanted to answer these questions so we could start developing recommended guidelines about how much time people should spend in nature. Similar guidelines have been developed to advise 150 minutes of physical activity per week, or that five portions of fruit and veg a day benefits health. Our findings do not yet offer a final recommendation, but we think they are an important starting point.

Our research used responses from a large, representative sample of 20,000 adults in England, collected as part of an annual government advisory survey on Engagement with the Natural Environment. The survey takes place in people’s homes and interviewers ask respondents to go through each of the previous seven days and describe any time they spent “out of doors” in natural settings such as urban parks, woods, or beaches on each day. 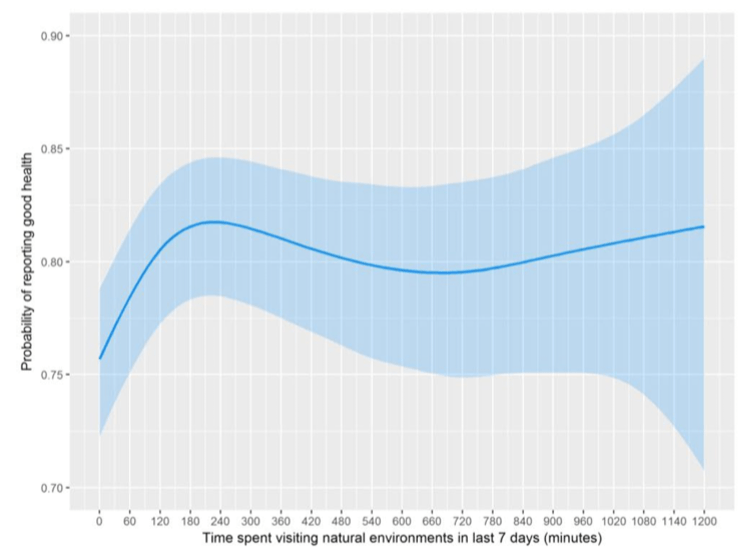 Once this nature “diary” has been reconstructed, interviewers randomly select a previous visit in the past week, and ask more extensive details such as how long the visit was, who they went with, how they got there, and what they got up to. This “random” selection aspect is really important scientifically because it means we get to learn about people’s visits in general, not merely the “highlight” events that most stick in the memory. Using these responses, we were able to build a profile of how much time each of our 20,000 respondents spent in nature per week.

To figure out how this was linked to health and wellbeing, we looked at the responses given by the same people to two further questions on general health and overall “life satisfaction”.

Perhaps most importantly, this pattern of a “two-hour threshold” was present for nearly all groups we looked at: older and younger adults, men and women, people in cities and in rural areas, people in deprived and wealthy communities, and even among people with and without a long-term illness or disability.

This suggests our results are not merely due to “reverse causality” – the possibility that people who visit nature are already a self-selected sample of healthier people. Even those with long-term illnesses were more likely to report better health and wellbeing if they spent 120 minutes a week in nature.

Although encouraging, we must be careful about overplaying these results. The fact remains that the data was self-reported and “cross-sectional”. Despite our best efforts, we can’t rule out the possibility that people didn’t accurately remember the time they spent in nature last week, or are nervous about talking about their health and wellbeing to interviewers. We don’t think this was too much of an issue here because the questions were simple, taken from internationally recognised surveys, including the census, and have been shown to be highly reliable.

Furthermore, there is a large body of experimental work, including work using stress biomarkers, which essentially shows that time spent in nature is good for physiological and psychological health – our main advance here is taking a step towards understanding a weekly dose.

There is increasing pressure on our parks and other green spaces to be used for urgently needed housing and other infrastructure. Colleagues and I fully appreciate that these alternative land uses are important, but we feel these spaces themselves are often undervalued. By improving our understanding of how spending time in nature is related to health and wellbeing we hope to better inform these decisions on what to do with green space.

Access to most parks and green spaces is free, so even the poorest, and often the least healthy, members of communities have equal access for their health and wellbeing. We hope that evidence such as ours will help keep them that way.