Where’s the desk? UK offices weighed down by paper clutter 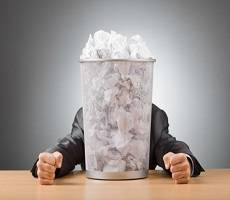 We’ve been hearing about the paperless office for more than two decades, BYOD (or CYOD) is supposed to replace ‘dead trees’; but we’re still drowning in paper. Today, the average UK desk is weighed down by almost a stone of clutter – with over a fifth of office workers losing important documents at least once a week, according to office equipment manufacturer Brother. Recent research by the EDM Group echoed these findings, estimating that employees wasted one and a half hours a week looking for misplaced documents and information. One of the causes is the sheer amount of information and data employees now receive, with over half (56%) in the EDM poll claiming that they receive more information at work than they did three years ago.

Untidiness and disorganisation also plays a part. According to the Brother research, one in ten office workers say they have been warned by their bosses about the state of their desk, and one in eight have even argued with colleagues about their clutter. Still, nearly half (46%) don’t believe it’s necessary to keep a tidy desk, with a third blaming a lack of time for their failure to keep their desks tidy.

Failure to keep on top of messy desks suggests the research, is leading businesses in this country to lose out on an estimated 35.7 million working days every year as office workers waste hours searching for lost documents.

Prof. Cary Cooper, Professor of Organizational Psychology at Lancaster University, who analysed the Brother research, said: “It’s astonishing that people are actually losing business as a result of just being disorganised. During this downturn, there are fewer people in the workplace, with heavier workloads and feeling more job insecure.

“To deal with the overload, they need to prioritise their workload and better manage their inbox and desk to perform more effectively. Just five minutes of organisation a day could lessen the number of workers being reprimanded by their boss for their messy workstations, and limit the one in eight arguments being had between colleagues about clutter. Keeping a tidy workspace helps to keep a tidy mind, meaning that workers can get on with the job in hand.”