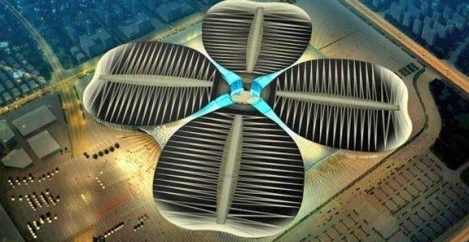 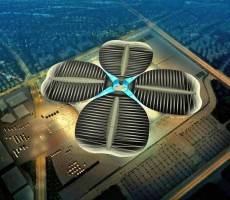 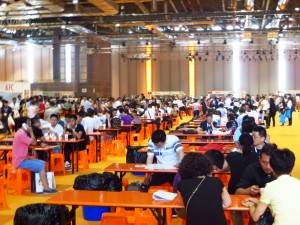 The 15 interconnecting lines of the Shanghai Metro that blanket the city like snakes and ladders, move millions of passengers every day. The trains are long, fast and spotlessly clean and getting around is cheap. Journeys however always take longer than planned because of the vast distances involved in entering, exiting and transferring between lines.

The marketing people appear to treat every real, and virtual, space in the city as a business opportunity. Adverts are displayed everywhere; on the floor of Metro stations, through the windows of trains, on the headrests of public seating. It’s as if it would be disgraceful to miss the chance of trying to persuade a punter to spend his money on the latest fad or fashion. Few people seem to take any notice of the messages; rather they are permanently plugged into their smartphones, watching a film, playing a game or catching up on social media. 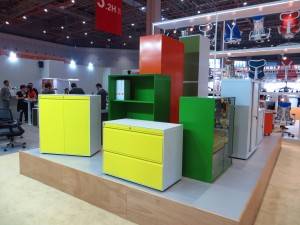 Weather-wise, September is probably the best month of the year to visit. The searing heat of the summer has passed and this year at least, visitors to the city were blessed with blue skies, wispy cloud, temperatures of 28 to 30 degrees Celsius, low humidity and not a drop of rain. Shanghai is a very young city. The average age of those you see around seems to be mid-twenties and one wonders where all those oldies are. 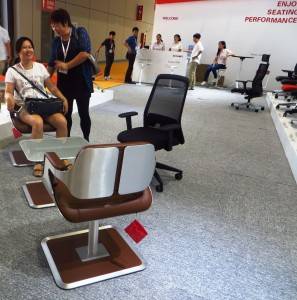 So much of China is on an enormous scale, including of course the exhibition centres. CIFF – the China International Furniture Fair – is a show held in two parts. At the end of March in Guangzhou and this September, for the first time, here in Shanghai at the new, vast, Foster designed National Exhibition and Convention Center which at 1.47m sq. m., is claimed to be the largest single block building and exhibition complex in the world.

Facilities include 500,000 sq. m. of exhibition space including 13 exhibition halls, each nearly 30,000 sq. m., a commercial centre, office buildings, and an hotel, linked by an 8m high elevated pedestrian walkway.

This was one of the first shows held here and not everything was quite ready. It was fortunate that there were fewer visitors than might have been expected because there was little in the way of refreshment or other support facilities available. 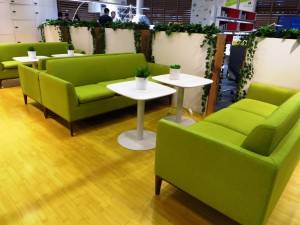 As for the show itself, it was disappointing. Only three of halls showed office furniture and there was little in the way of innovation or stunning design to catch the eye. Most of the companies had shown at the very much busier Guangzhou event only six months ago and two shows in six months is too many, even for Chinese companies forever intent on promoting themselves. It may also account for the dearth of visitors, although that may have had more to do with the competition from the long-established Furniture China show on the other side of town. 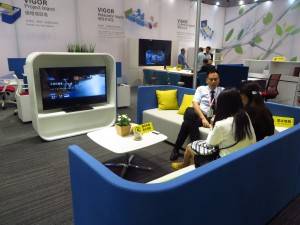 The show was probably not sufficiently representative to draw accurate conclusions as to the direction that the market is heading. There is still no evidence that manufacturers are thinking about the way work in offices is carried out, or how people behave, communicate or relate to each other in a working environment. Consequently, products are designed in a vacuum rather than trying to satisfy a perceived need, which is probably why copying is still so prevalent.

Strangely, there was less in the way of sit-stand furniture and innovatively designed enclosures and breakout seating than there had been in Guangzhou. Workstations were generally white, with the occasional woodgrain, fabrics were often bright, primary colours. There was some evidence of solid wooden legs on plastic chairs and tables, continuing the trend seen at Neocon. 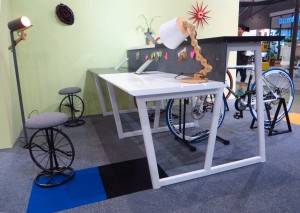 Almost all of the exhibitors were from China, or one of her close Asian neighbours. A notable exception was Herman Miller whose large and impressive stand was shared with their Hong Kong based sister company, Posh. As Jeremy Hocking, Herman Miller’s Head of Asia explained, this was their first time at CIFF and marked the launch of their joint marketing activities with Posh. The displays were rather more product-based than their conceptual presentations at western shows like Neocon, with an emphasis on iconic seating products and steel storage from Posh. Unfortunately, there were plenty of other, rather less authentic variations of their Sayl chair, scattered all over the show.

The other large US exhibitor was KI, along with their newly appointed local partner who will be distributing KI ranges across China. The statuesque Russian girls in scarlet draped over their stand appeared to be generating as much interest as the furniture. Dick Resch, President of KI, explained that the company had long sourced components in China but this was their first foray into local distribution. 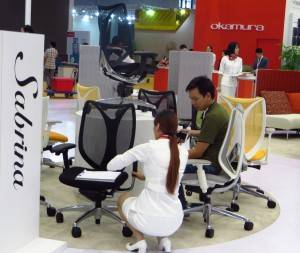 European companies were few and far between. Interstuhl’s partner had a stand displaying the Silver chair and other models, and Headway from Nanjing showed some of their own ranges alongside those from Faram from Italy and Håg from Norway.

Most of the largest Chinese companies were present although, as with Sunon, their stands, although of a high quality, were considerably smaller than they had been six months earlier in Guangzhou.

As with many other of the large Chinese companies, Victory not only had a VIP area on their stand with restricted access for special visitors, but also a VVIP area where they showed some early prototypes of new products designed for them by John Bennett.

One feature of exhibition stands in China which westerners find odd is when everything seems to stop at noon, so that all the staff can gather in huddles at tables or just squatting , heads lowered over their lunch bowls. Visitors are studiously ignored while the off-putting aroma of hot food wafts across the stands. 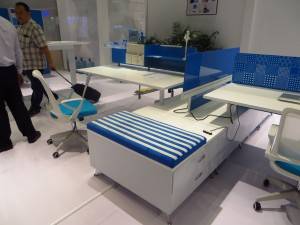 There were copies of products, blatantly presented, in all the halls. The Export Manager of one company, CJF from Shenzhen, introduced their workstation system to me by saying that it was “a Steelcase concept – we copied their idea and then we made some changes”. Steelcase were also the target of Eagle Seating who showed a very close approximation of their Gesture chair. Elsewhere were copies of products from Vitra, Okamura, Herman Miller, Actiu and many others. When challenged, the exhibitors’ normal reaction is just to laugh.

Qumn, one of the larger companies in the industry headquartered in Guangzhou, had a large attractive stand with some imaginative settings.

The Japanese giant Okamura also had a large well-positioned stand and displayed a wide range of seating and enclosures. They felt their products were probably more relevant to the large number of major international companies setting up in China than to most local companies.

There were plenty of bright colours on show, none more so than from the aptly named Blue Sky Maxco whose factory in Hefei in Anhui Province is stated to extend to 100,000 sq m.

There were, of course, the usual unusual signs………….. 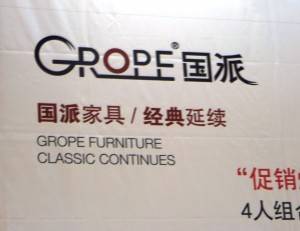 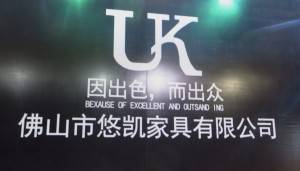 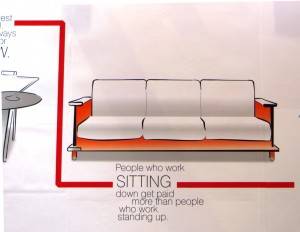 More people are working from home, but they can end up feeling lonely Fifth of employers not productive enough to afford Living Wage warns CIPD