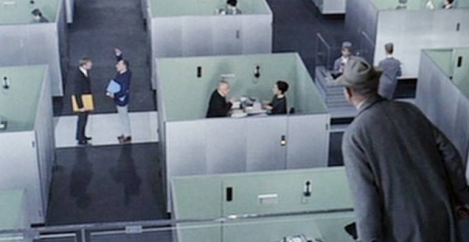 Are open plan workspaces truly evil or is this just fake news?

A recently published paper describing the results of an academic study by Ethan S. Bernstein and Stephen Turban[1], both of Harvard, has become another unwarranted casualty of the debate within our industry and in the mainstream media on ‘open plan’ offices versus anything else. The researchers conducted two controlled studies in different organisations before and after a workplace refurbishment from dedicated cubicles to dedicated open plan (benching) neighbourhoods, and concluded that face to face interaction reduced significantly, while email and other digital communications increased in the new environment.

It’s not hard to guess what happened when workplace commentators got their hands on these findings, right?

“Open plan offices don’t live up to the hype – in fact, the idea that they promote interaction is dead wrong.”

“A recent Harvard University study has proven what anyone who has ever worked in an open-plan office already knows to be true: they’re terrible!”

“If you’ve long felt open-plan offices were a collaboration killer, a new Harvard study proves you were right all along.”

(sources withheld to protect the guilty.)

We all know this is the wrong debate, right?

Setting aside the fact that ‘open office’ is a very broad term that encompasses a hugely diverse range of workplace designs, like many things in life when done excessively it can be bad for you, but used in moderation in the right context for the right purpose, ‘open plan’ has a place in the workplace toolkit.

So why is it so tempting to get caught up in the ‘open plan is evil’ debate, rather than reviewing the facts of the research and applying these rationally to advance the understanding and (one hopes!), the quality of decisions about work environments?

Fake news vs the facts

I took the time to locate and read the original research paper titled “The impact of the ‘open’ workspace on human collaboration” by Bernstein & Turban.  Yes, it’s an academic paper so it’s structured in a particular way that’s a bit like reading Shakespeare after a diet of Facebook, but the effort is worth it if you’re serious about separating ‘fake news’ from the facts.

After reading the paper, I felt compelled to put the research findings into context and to consider how the results contribute to our understanding of the influence of open environments on behaviour. 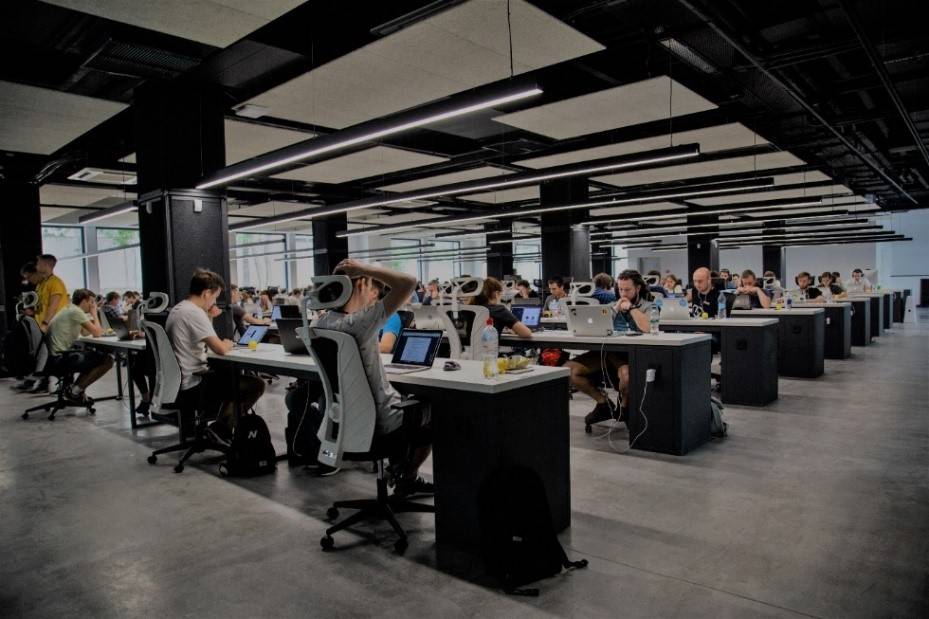 In a nutshell, the purpose of the research was to test the effect of moving from cubicles to open plan benches on face to face and digital interaction.  To isolate the possibility of a ‘causal’ effect the study had to be very controlled, which means the effect of other potentially influencing factors had to be removed, reduced or ignored in the data.  This is typical of rigorous, statistically valid academic research, and is both its strength and, sometimes, its weakness.

The methodology involved a small sample of employees who agreed to wear sociometric devices to capture the change in quantity of face to face (F2F) interactions, which were defined as occurring under specific circumstances.  In parallel, the volume of digital interaction (also carefully defined) was also measured.  The statistical results revealed that in both studies the volume of face-to-face interaction decreased by approximately 70%, and emails between participants increased by approximately 22-56%.

The logical conclusion was that as a result of moving to open plan email and instant messaging replaced communication that was previously done face to face.

On the surface of it, many of us in the industry might not find this result terribly surprising, as we know from many studies – stretching back to the famous “Hawthorne Studies” [2] – that there is a tendency for people to withdraw when boundaries and degrees of privacy are removed – in other words, people feel more exposed without their cube walls and try to ‘replace’ perceived loss of communication privacy by emailing instead of talking.

However, while this may explain to a degree the change in behaviour, this should not be used to suggest that cubicles offer more acoustic privacy for face to face conversations; fake news alert – high-walled cubicles are not acoustically private.

Instead it should heed us to devise better ways of mitigating negative behavioural responses to exposure, while encouraging the positive responses to openness and greater connectedness, in very open and transparent environments.

If you don’t ask…

If you are like me, by now you are probably starting to ask a yourself a lot of questions about the context of the studies, which would deepen our understanding and help us come to relevant and rational conclusions about the results.  Questions like:

Questions like this are important, because without properly understanding the context, we risk applying (or discounting) the evidence in a situation where it could have contributed to a better workplace decision.

Seeking answers to my questions, I reached out to the authors, and had an engaging and enjoyable dialogue with Professor Bernstein.

Of course, as this was a real-world situation (and perhaps also because the collaboration outcomes were less than ideal!) the researchers were required to keep most of the study information confidential – including the really useful contextual stuff I wanted to know more about.  Bummer, but totally understandable.

However, the authors could confirm that there was no change in technology or overall density in the new environment, and no new collaboration or focus spaces were added, although the researchers couldn’t reveal if there were any (or many) in the first place. 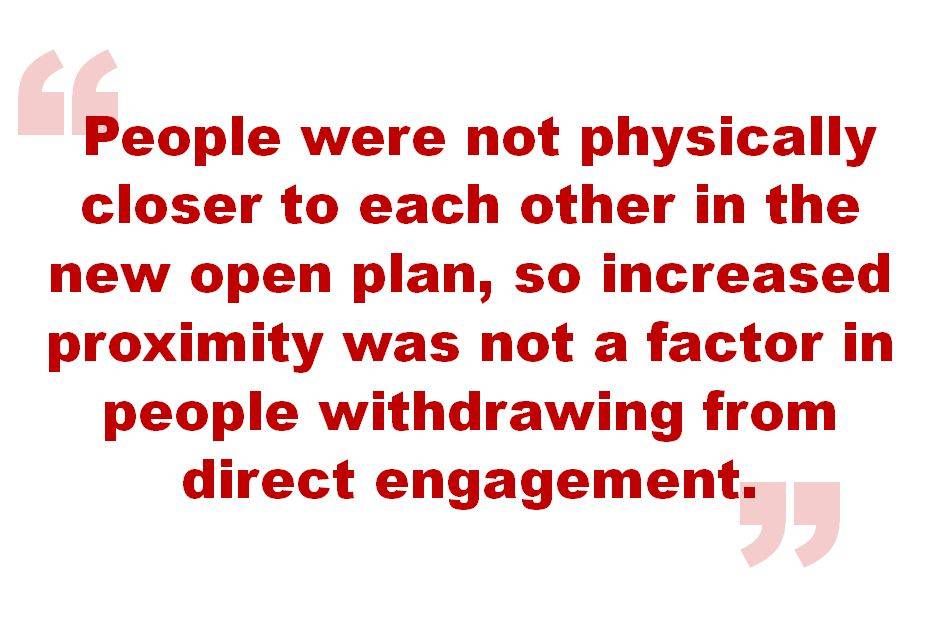 This suggests that people were not physically closer to each other in the new open plan, so increased proximity was not a factor in people withdrawing from direct engagement.

We also conclude that F2F was not encouraged in other ways; people were no more mobile than before, as no new technologies were introduced to support individual or group activities away from dedicated desks, nor were any new spaces designed to encourage face to face discussions provided in either refurbishment.

However, we would have expected the ability to observe colleagues within close proximity (who we assume were previously hidden from sight by the cube walls) would have prompted more spontaneous conversations around the benches, particularly coaching and problem-solving type discussions that tend to happen as people are working together.  The researchers said they tested the findings without the line-of-sight constraint for identifying a F2F conversation and found no significant change in the results.

This means side by side or diagonal conversations at desks didn’t increase, which is a very poor business outcome because these ad-hoc localised conversations are increasingly important in fast-paced, continuous improvement, on-the-job learning environments, and more open team environments have been widely embraced as a way of encouraging this.

So, what might this mean for future workplace strategies and design?

It probably means we don’t know enough about the context to draw specific conclusions about contributing causes.

It could be that both refurbishments were poorly-designed open plan environments, with little spatial diversity and little regard for acoustic privacy and noise management, or it might mean that neither company considered behavioural change and supporting protocols to encourage the desired increase in communication.  It could also be that people are having these conversations outside the physical research zone, when not wearing their sensors.

Context is complex (and so are humans)

The findings by Bernstein and Turban provide valuable, quantitative evidence that line of sight and proximity may not increase the quantity of face to face communication within teams under all circumstances. It complements and reinforces existing research into teamwork, collaboration and innovation that reveal some of the shortcomings of open-plan offices[4].  Specifically, it could be inferred from the evidence that providing open plan environments for teams who depend on collective intelligence is likely to reduce their face to face interaction and therefore performance, unless more private spaces for discussion are also provided.

Face to face interaction is the most valuable form of communication for building collective intelligence, which is social, political and technical, and a critical requirement for team performance and productivity[5].

This theory of proximity has been widely applied in workplace strategies for open team work areas connected by shared breakout and connector spaces which act as ‘buffer and bump’ zones, the argument being that these spaces encourage social interaction and relationship building.

A real-world example of ‘encouraged proximity’ increasing social interaction is provided by Boston Consulting Group’s move to new offices at Hudson Yards, which were deliberately designed to encourage “brilliant, diverse, passionate people to connect and cultivate ideas that shape the future.”  Face to face interaction data captured (also using sensors) showed that ‘collisions’ between people increased by almost 20% in the new workplace compared to before[8].  Most of the increase was in collisions with people in other teams or departments, which was a desired outcome.

A critical contributor to this successful workplace for BCG is that it is 100% unassigned, and the workstyle of a management consultant is naturally mobile, extremely varied and reliant on superior knowledge-accumulation across a range of disciplines.  The BCG workstyles are probably a stark contrast to the workstyles of a bunch of finance, human resources and product people assigned to desks with what seems to be little spatial diversity in the Bernstein and Turban study.

This demonstrates the critical importance of workstyle and cultural context in identifying the workplace characteristics most likely to have a positive or negative influence on desired behaviours.

We only know what we know

What the evidence from both these new workplace performance results fail to tell us (and don’t try to!) is whether open plan is good or bad, because we know that question doesn’t make sense. 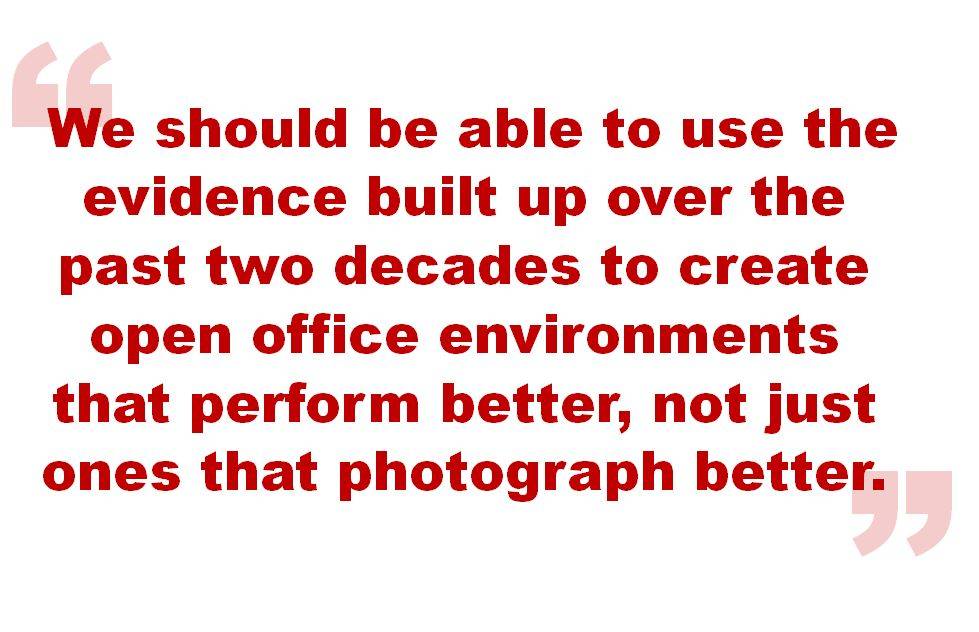 Despite evidence suggesting the advantages of transparency and proximity often don’t materialise, more open, less partitioned environments have become, in various guises, the dominant characteristic of workplace strategy and design for the past twenty years. While predominantly open environments might be here to stay, we should be able to use the evidence built up over the past two decades to create open office environments that perform better, not just ones that photograph better.

This new research from Harvard provides some useful insights and cautions us to consider team workstyles and what makes teams successful when making choices about the work environment. How we combine and apply the settings in our workplace toolkit can have a negative – even if unintended – influence on team effectiveness, so it is incumbent on workplace advisers and influencers to avoid ‘groupthink’ and apply learnings from other workplaces thoughtfully.

Rigorous, credible workplace research is good for our industry and for leaders because it helps inform decisions. As I’ve previously written without understanding the context and how it may relate to a specific organisational decision, it is risky to apply research findings to workplace strategies in general.

Monotonously open plan environments may indeed be the enemy of workplace effectiveness and employee experience in many (or most) situations, but let’s ensure we don’t make critical workplace decisions based on ‘fake news’.

[2] “Human problems of an industrial civilization”, Mayo, 1933, and many other studies since, including a number by the Cornell International Workplace Studies Program, for example “The ecology of collaborative work”, Becker, Quinn and Tennesse, 1995 and “Offices that work; balancing communication, flexibility and cost”, Becker & Sims, 2001, and the well-known BOSTI Associates “Disproving Widespread myths about workplace design”, Brill & Weidemann, 2001.