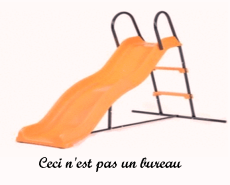 “The brain is a wonderful organ; it starts working the moment you get up in the morning and does not stop until you get into the office.” I don’t believe this famous quote from the poet Robert Frost  is particularly true but it appears to be an assumption that certain people make when it comes to creating those lists of office design that they describe as fun, trendy, cool or quirky or some other inappropriate, tired adjective. Invariably these offices feature such decidedly uncool and untrendy things as slides, swings and treehouses. One of the latest examples of this kind of thing is to be found on the BBC website with a number of pictures submitted by the sorts of adults who are not ashamed to claim that their idea of fun at work is apparently a meeting in a ballpool or on a swing. Of course, they don’t really think that, except in a work context. I’d bet they can easily walk past the ballpool at Ikea without feeling the need to dive in as an alternative to picking out a sofa.

Of course, there’s nothing particularly grown up about a by-numbers open plan office either, but its alternative is not simply an office based on a Wacky Warehouse. The antithesis of blue carpet sterility is not juvenilia in exactly the same way that dress-down day doesn’t mean ditching the shirt and tie for a Peppa Pig onesie.

The underlying idea of the people who create what are routinely now designated as the world’s coolest offices is clearly to make them relate to a human being rather than the corporate automaton. That is a noble sentiment but does it need to manifest itself quite so often by aping the aesthetic of the kindergarten, even (or especially) if the firm thinks it will appeal to Gen Y? Does the regular procession of such lists suggest these are the desirable features of what people consider good places to work? And isn’t it perfectly possible to create an office that eschews the cold, monolithic and mundane in favour of something that is genuinely attractive, humane and profoundly adult.

The same impulse to humanise our surroundings in misguided ways is also evident in the latest generation of tall buildings currently cluttering up the London skyline. While a building like The Shard is elegant and adult, many others are ugly and contrived. Part of the reason for this is that the people who give the nod to the developments actively encourage architects and developers to come up with something they assume the public will find quirky. In an interview in The Guardian last year, Peter Rees, the chief planning officer for the City of London, laid out his belief in manufactured kookiness. ‘Nicknaming is important’, he said. ‘The fact that the public warmed to tall buildings after the Gherkin is indicated by the fact that they wanted names for them: they wanted distinctive buildings they could relate to.’

Nobody could argue that people should relate to their surroundings but are they really able to relate at all to a 225m steel and glass secure edifice inhabited by bankers whatever nickname you give it? And do they really think work will be more fun if you ask them to hold a meeting in a ballpool? The answer to both questions is no. It’s time to put away these childish things, for the media to stop pushing the idea that it’s fun and seek out humane, enjoyable design and architecture for adults.

Nearly three quarters of workers report office temperature affects performance If you want to reduce the cost of your office, move to a creative area