If you want to reduce the cost of your office, move to a creative area 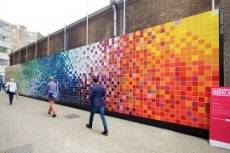 “First we shape our buildings, thereafter our buildings shape us.” Winston Churchill, House of Commons opening speech. Buildings do indeed shape us, but what seems to affect us even more is the neighbourhood. It’s the immediate environment as opposed to buildings that is much harder to create. It needs numerous factors to influence it, among them the two most precious components– the right people and enough time. Politicians all over the world dream of creating zones that will draw the most innovative companies. But it seems that most of them grow organically – the Silicon Valley in California, the Silicon Alley in New York and the Silicon Roundabout in London. The combination of low rents, proximity to the centre of a dynamic metropolis and interesting culture made the East London neighbourhood of Shoreditch, Clerkenwell and Aldgate a perfect magnet for some of the world’s most exciting companies. So should you think about relocating there too? Here are some things to consider.

As of 2014, office space in London’s West End is amongst the most expensive in the world. Even if we look at the entire city, the cost of supporting a single workspace is estimated at £7-10K (€8800-12500) pa. As a result companies are looking to introduce flexible working and try to save some of that cost.

Indeed, it becomes harder and harder to find good arguments to continue paying two or three times more for the same office space, only because it is located a couple of tube stations further to the West End.

One could argue that the technological revolution significantly lowered the value of a central location. More and more meetings are conducted on-line through VC technology, like Webex or Lync, people can work from anywhere and easily connect with their colleagues in the core office. But the areas of Shoreditch, Clerkenwell and Aldgate can no longer be considered a periphery – it is too easily accessible and it will only improve with Crossrail coming to Shoreditch.

It seems that in the so called “Tech City”, innovation is in the air. You live and breathe it. Transferwise, Hailo, Seedrs, Songkick, MindCandy, YPlan and all the other successful start-ups are there. And their employees tend to eat lunches in the same local eateries.

I believe entrepreneurs are the most open people in the business community. Just going out for a coffee, your employee may end up having a conversation about a concept that can completely revolutionise your field. It is not an accident that companies like Tesco, William Hill or Deloitte have already located their tech teams in the neighbourhood. Many believe that locating one’s office in a vibrant, youthful area helps companies stay in touch with the younger generations and avoid any disconnection from the reality of their business, known as the Ivory Tower Syndrome.

Some of the world’s most successful companies go one step further by opening their door to the start-up community, providing it with free office space within their own workplace. Take Google Campus, Microsoft Ventures programme and Friends of eBay – all of these tech giants are willing to pay the young persons’ bills, just to be in touch with the new cutting edge ideas and technological innovation. Many believe that the contact with young entrepreneurs reminds their own employees to be more daring, more flexible and more entrepreneurial.

“It’s amazingly hard to find good coders. London is a fantastic city and it works like a magnet to the best talents in the world. Not to mention Shoreditch…” Jacqueline J. Lam, founder at Boutiny.com

There is simply not enough good IT specialists in the United Kingdom. Some blame the British education system, some the complicated process of acquiring a working visa, but the fact remains. In the now famous report, “A Tale of Tech City” by M. Nathan, E. Wandore and R. Whitehead, the interviewed founders of technological companies placed lack of talent at the top of their list of concerns.

The hip, cool, entertaining area of East London seems to be a paradise for young talented employees. The rents are not very high, you can live close to where you work, you can find take away food on every corner and you will definitely not be disappointed with the night life. Not to mention that you have a chance to meet the best in your field on daily basis, just by going to any café nearby.

In the war for talent you need all the help you can get. Why not have the neighbourhood do half of the work for you? If you add to that a well-considered, flexible and open workplace, you may find yourself picking and choosing from the most talented employees of the new generation. Even if some of the start-ups will move out from the area it will, for a long time, be an exciting place to work.

East London is not for everyone. It is fair to say that there are cheaper locations in the United Kingdom. However if you want to reduce the cost of your office, move to a creative area, stay in touch with the new ideas and draw in some of the best tech people out there you might one day find yourself seeing E1 or E2 at the bottom of your e-mail signature.