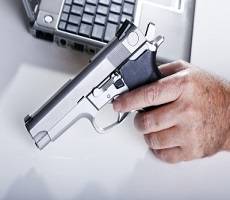 Growing concerns regarding the incursion of connectivity devices into our everyday lives ignores the fact that many people have little or no access to these tools. Access to the Internet may have been ruled as a UN human right, but that doesn’t really help those who can’t afford devices that connect them to the web in the first place. So, while for most Europeans the recent story in the Baltimore Brew that locals could turn in their guns in exchange for a refurbished Dell laptop is pretty jaw-dropping, it’s a good example of the difficulty residents in a deprived area have in, as the organisers describe it, “bridging the digital divide.”

Stop Shooting, Start Coding”, which was sponsored by the local non-profit Digit All Systems and the [Baltimore] Mayor’s Office of Criminal Justice took place following several weeks of escalating gun violence in Baltimore – which had resulted in 22 homicides over the previous three weeks.

“This is a celebration of education over violence,” said Digit All’s founder Lance Lucas, who, explained the Baltimore Brew grew up in the city, and says he hopes events like his can point the way toward “logical long-term solutions, not personality-based reactive solutions” to the city’s persistent bloodshed.

Digit All System’s Guns For Computers Initiative aims to take guns off the street and provides computer certification courses for members of the community who do not have access to information technology training.

The guns will be melted down and the hope is that people who receive the laptops and take the necessary training, will have more marketable skills and opportunities for a wider variety of jobs.