Clerkenwell Design Week explores the links between design and the individual

For a show with such an international perspective there are many aspects of Clerkenwell Design Week that mark it out as a typically British event. There’s the weather, of course, which can vary from day to day between drizzle and bright sunshine, marking the difference between visitors dodging showers and huddling in showrooms or spilling out onto the pavements to drink beer and talk turkey. Then there’s the very idea of Clerkenwell itself, a district in East London historically associated with the arts and crafts movements, dodgy dealings, immigrant artisans and labourers and the sort of denuded former glories that those with the right mindset like to appropriate and reinvent. London may exist as a City State within the UK, but it also provides the beating heart for many nationwide industries. For the UK office interiors industry that heart can be found in Clerkenwell.

Agora on the Green

So densely packed are the showrooms that the whole event can be navigated easily on foot and probably with a lower chance of blisters than a two day trek around the Salone in Milan or more traditional international office interiors exhibitions in the vast halls of Chicago and Cologne. By comparison, so closely packed are the showrooms in Clerkenwell that they create a district that is vibrant during the working days of each week but becomes a dead zone at weekends. During Clerkenwell Design Week the firms that inhabit these showrooms unfurl the coral pink banners supplied to them by the organisers as they seek to draw passers-by into their maw.

What any first time visitors will also notice is just how many firms are involved in the UK office interiors market. While countries like the US, Japan and Germany boast firms with genuine star power in their own markets, even the global superstars have to settle for a role in an ensemble piece in a British context.  The market is much more fragmented than it is in many other countries with each firm far less likely to dominate the market and the trends within it.

As well as the now habitual cross-pollination of ideas and forms between office, hospitality and domestic design, sit-stand workstations are big news for the first time after years in which UK based vendors have attempted to bring attention to them as well as draw unfavourable comparisons with other Northern European nations who specify them as commonplace. This is perhaps part of a wider shift in the way workplaces are talked about. Property based issues such as space efficiency and churn are now secondary issues compare to human resources issues such as wellbeing, flexible working and recruitment.

Firms such as Orangebox and Staverton were focussing on these issues in both their intellectual content and product designs. Orangebox is championing the links between wellbeing and design in very interesting and informed ways, led by the very knowledgeable Jim Taylour. 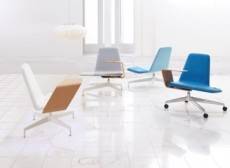 Another firm looking to capitalise on the British predilection for all things Scandinavian and humane was Scandinavian Business Seating who, as well as showcasing their latest products at the firm’s permanent showroom are taking part in the Agora on the Green collaboration with disaster relief charity Article 25 and designers russ+henshaw right in the heart of Clerkenwell. Agora on the Green was ‘a representation of how innovative design can reinvigorate public spaces and bring communities closer together, mirroring the ethos that underpins the work of Article 25. The installation is timely with the ongoing relief effort in Nepal and has been updated to take account of the evolving situation. The installation also tied in with SBS’s theme for the whole week of ‘Design for Life’. 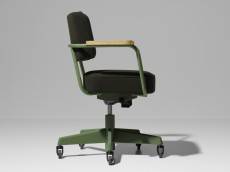 One of the few iconic global workplace design brands yet to make its debut at Clerkenwell Design Week is USM. The firm was putting that right this year because it chose Clerkenwell as the location for its first London showroom. The company used the occasion to celebrate 50 years of its Modular Furniture Haller storage, with a multifaceted, global project called project50, whereby the next generation of designers from various countries explore the concept of modularity. 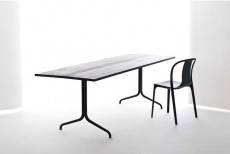 Another global icon and longstanding Clerkenwell highlight is Vitra who focussed on the modish idea of 20th Century revivalism with a retrospective on the life and works of architect Jean Prouvé to celebrate the UK launch of its Prouvé RAW Office Edition, which was first seen at last year’s Orgatec exhibition in Cologne.

Humanscale meanwhile previewed its new Trea chair designed by Todd Bracher who came over from his New York Studio especially for the occasion. The chair is suitable for environments as diverse as cafeterias and collaborative workspaces, through to dining rooms and home offices. Visitors to the Humanscale showroom were also able to see the Ballo stool, designed by Don Chadwick. 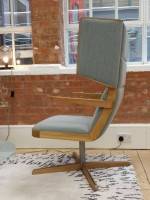 Wilkhahn and Connection Seating were also using the event to launch new showrooms. Connection marked the occasion with the launch of a new product called Jentle designed by David Fox.

As well as the permanent showrooms, there were four dedicated exhibitions spaces: Design Factory, Platform, Detail and Additions and a Fringe programme in which local creative practices such as branding agencies, architects and craft studios hosted workshops and displays. 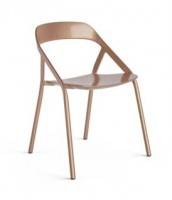 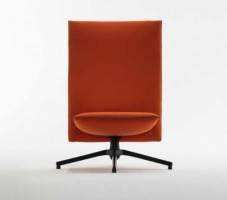 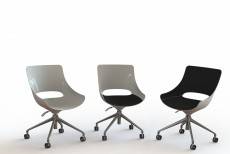 At Milliken, each day of the festival was themed around one of the company’s latest carpet tile collections – Rogue Knit, Naturally Drawn and Clerkenwell Collection. Of the other global flooring manufacturers Interface were focussing on their recent fascination with the links between office design, the environment and productivity. 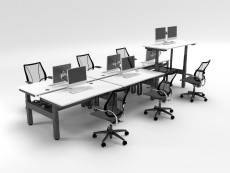 As with Orangebox, Interface is not content to pass universally available content and expertise pass for original thought but employs dedicated experts such as Simon Heath to provide an informed, nuanced and unique perspective on the links between office design and happiness, wellbeing, productivity, collaboration, ethics, balance and performance.

A version of this review also features in US based office furniture journal Monday Morning Quarterback.

Footnote: Any review of a show like Clerkenwell Design Week inevitably offers just one perspective. Many others will already be available online both from individual visitors and media such as Mix Interiors, onoffice and Icon.