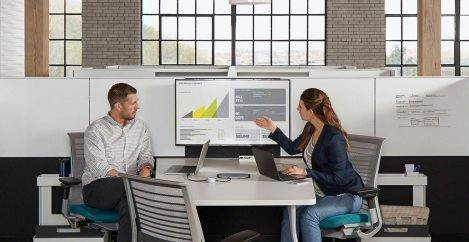 Designing space for virtual collaboration in an untethered world 0 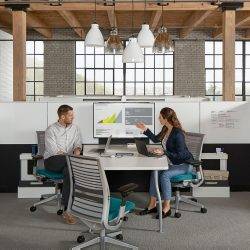 Working with colleagues across different geographies and time zones has become the norm since an increasing number of organisations now integrate and seek collaboration at a global level. Interestingly, according to Cisco, 62 percent of workers now regularly collaborate with people in other countries. These globally integrated enterprises (GIE) aim to draw in the best talent from across the world, delivering maximum innovation and efficiency. The rise of global and distributed teams has been further encouraged by the popularity of remote working, with 71 percent of office workers now choosing greater flexibility to work from various locations instead of travelling to the office everyday . And the trend only looks set to gain pace, with 56 percent of senior leaders in large global companies expecting global teams to increase in the next one to three years.

This new way of working has the potential to revolutionise the workplace, but it’s not without its challenges. Organisations need to adapt to new technology, methods of communication and the evolving dynamics of virtual teams. A study by IBM found that while 80 percent of organisations say they need to foster more collaboration, 78 percent are struggling to achieve this in the virtual environment. And if teams can’t collaborate effectively in a global structure, any productivity or innovation gains will be quickly lost.

In fact, distributed teams can cause serious roadblocks to collaboration, causing “presence disparity” to occur. In such instances, those working remotely have a different experience to those working side-by-side. Presence disparity can be anything from your team forgetting that you’ve joined a meeting by phone, to a video call that cuts out, or being unable to see a whiteboard during an online meeting. These issues can severely impact productivity, communication and understanding between teams, ultimately undermining collaboration.

Video conferencing goes some way towards solving these issues, providing the option of face-to-face communication, even when working at distance. According to a survey by Blue Jeans, almost two thirds (64 percent) of workers believe face-to-face communication helps build relationships, while eye contact has been shown to be central to building understanding and empathy between people. This can be particularly important when different cultures are working together, helping to break down language barriers and aid understanding.

However, video communication is by no means perfect and issues of presence disparity will persist if it isn’t deployed correctly. For example, 43 percent of workers have had difficulty understanding people over videoconference, 34 percent haven’t been able to see an accompanying presentation and 31 percent have experienced bad connections and dropped calls. There are also camera angles and lighting to consider, with many workers distracted by how they look on the screen and others acting much less naturally than they do in real life, leading to less genuine and more distracting communication.

One of the key issues with videoconferencing is that in many cases the design isn’t supporting the technology and the behaviours needed for effective virtual collaboration. For example, conference rooms are the most-used environments for videoconferencing (79 percent), according to Polycom. Yet, typical conference rooms with long rectangular tables can be difficult for interactions in person and they are not ideal for video. By locking people into seated postures, these rooms make it impossible to have everyone on camera and, with typically just one monitor, sharing digital content is difficult. Audio pickup is also uneven, depending on where people sit, and, because of the camera angle, anytime someone stands or walks around, it’s disruptive.

So, what should we do to prevent these problems?

Organisations need to think more carefully about the design of videoconferencing spaces so that they mimic being collocated, help to break down communication barriers between co-workers and ultimately amplify focus and engagement among participants. There are a number of design considerations to help organisations when creating spaces for distributed teams reduce presence disparity. 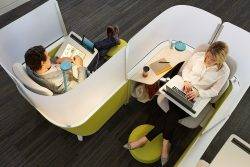 You should consider camera and microphone placement carefully. Although this may seem simple, it is critical to develop a layout that allows all users to be on camera and clearly audible. This should include multiple screens so participants see each other and their content at the same time, making sure people can move and stay on-camera without disrupting the flow of interaction.

It is also important to create zones that allow people to move fluidly between group work and privacy. People in collaborative teams make quick switches between these modes throughout the day and it is important to provide an engaging environment that caters to various tasks. For example, enclaves immediately adjacent to the team space allow team members to get away and focus individually.

These design environments should also encourage movement and a range of postures so participants can stay energized and engaged. Stool-height tables encourage standing up and staying on camera, or make it easy to transition off and back into the conference. A lounge setting with video conferencing is another effective way to encourage movement and informality. Of course, it is important to provide similar environments in all locations, equipped with the same level of tools and technology controls.

You should also plan for a range of team sizes and video-conferencing exchanges. One-on-one interactions and small group work are as important as full team sessions. Creating as many choices as possible – smaller videoconferencing kiosks adjacent to the larger team space, nooks within the large space and even mobile videoconferencing technology – will leverage real estate and encourage use of the technology.

Presence disparity is a growing issue that threatens to stifle innovation at a time when organisations need it most. But if planned and incorporated effectively, virtual collaboration won’t just help overcome issues with presence disparity; it can also be a powerful catalyst for change. It gives organisations the opportunity to fully leverage their scale, scope and talent for maximum innovation and productivity, irrespective of location.

David Woolf is General Manager of Integrated Technologies at Steelcase. This piece is taken from the new issue of Work&Place