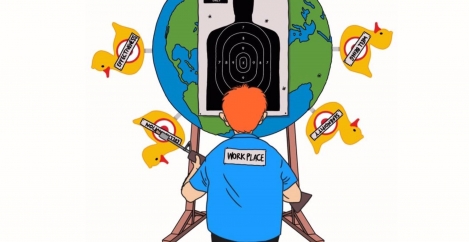 Don`t believe what you read about wellbeing, except this 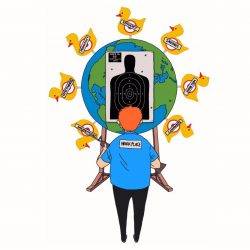 As we are told repeatedly, the modern workplace is not very good for our physical and mental wellbeing, and potentially a death trap. Most of us are lucky to get home in one piece at the end of each day, regardless of the job we do.

Of course, statistically the most dangerous professions are those such as agriculture, forestry and construction. Proper, hardcore industries which employ proper, hardcore people, some of them working miles from anywhere, out in the open air, doing what used to be considered the core functions of work, namely making things or destroying things or moving things from one place to another.

This kind of work is dangerous because it involves operating machines and tools that use hammers, winches, blades, cables, scoops, belts, wheels, cogs, drills, explosives and spikes to chop, lift, skewer, smash, pierce, detonate, slice, chip and topple heavy, pointy otherwise inanimate objects such as trees, buildings, rocks and dead cows. Sometimes the people putting their backsides on the line in this way do so while they’re up ladders or ropes, driving or stood on top of, next to or at the base of the heavy, pointy or suddenly moving objects.

Of course, you’d never believe this sort of stuff was all that dangerous compared to the work of us poor lambs who stare at computers all day. Not if you were to read about the number of risks to our wellbeing that we apparently take when we sit down.

No part of our body is now safe from the degradations of office work, not our hands, arms, backs, necks and legs and certainly not our minds. All of them at risk of moving too often or not enough or in the wrong way. Our noses are assailed by smoke, perfume, solvents and poor air. Our ears by ringtones and machines and other people’s inane yapping and bellowing. Our hearts, lungs and bodily fluids are subjected to the most appalling risks.

Even our genitals are not safe. The Lancet once reported the case of a 50 year old Swedish scientist who had burned his penis with his laptop after working with it in an armchair for an hour without moving. The man claimed he was dressed at the time, but it’s fair to say that our opinion on that matter might easily veer towards the sceptical.

Stress is now the number one cause of magazine articles in the world today. And vice versa

Then of course there’s the impact office work has on the inside of our heads. New figures show that stress is now the number one cause of magazine articles in the world today. And vice versa.

Suffice to say that based on what you might read, nobody is actually doing any work in Britain nowadays, because, if they’re not at a physiotherapist, they are rendered completely unproductive by depression, wasted time on emails or meetings, not to mention murderous fantasies about their co-workers.

There are lots of reasons why we have arrived at this point but one of the most important is to do with the way that marketing functions through the media. Companies with a product to sell need to build a business case for it and that means raising a concern with customers or possibly scaring the living daylights out of them either with a direct personal appeal or the threat of harm and litigation about the effects on their wellbeing.

That is not to say that there aren’t challenges and some of them are significant and life changing for those affected. But all too often the real problems are obscured by the fog of the war for airtime and print space.

As well as confusion, there is also the potential for workplace scare stories to throw up some dubious claims about wellbeing and some that are plain nonsense. For example, I recently read an article about RSI that claimed that the solution had nothing to do with medical advice, seating and training but was to use magnets, which apparently draw blood to the afflicted area of the arm by attracting the iron in the red corpuscles. You could argue about that, but when marketers are that far gone there’s probably not much point.