As urban world is moving towards the developing world, GlobalData, a data and analytics company, forecasts that 88 percent of the world megacities will be based in the developing economies of Asia, Europe & Central Asia, Latin America and Middle East & Africa by 2025. Out of 44 megacities in the developing world, GlobalData has identified 26 that will outperform developed cities by 2025. The company forecasts that the share of emerging cities to the world’s gross domestic product (GDP) will increase from 7.2 percent in 2018 to 8.3 percent in 2025 while the share of developed cities to the world GDP will decline from 8.1 percent to 6.8 percent during the period.

However, the maximum growth will come from cities in the developing world. By 2025, seven emerging megacities will have GDP over US$0.5 trillion. Shanghai will lead the table with GDP close to US$0.85 trillion, followed by Beijing (US$0.78 trillion), Mexico City (US$0.68 trillion), Shenzhen (US$0.67 trillion), Chongqing (US$0.61 trillion), Guangzhou (US$0.57 trillion) and Moscow (US$0.52 trillion). Riding on the back of good economic growth, emerging megacities from India are expected to show maximum growth between 2018 and 2025 with Mumbai registering the fastest growth of 126.3 percent, followed by Hyderabad (pictured) (109.8 percent) and Bangalore (105.5 percent) during the same period.

Growing consuming class to give edge to emerging megacities 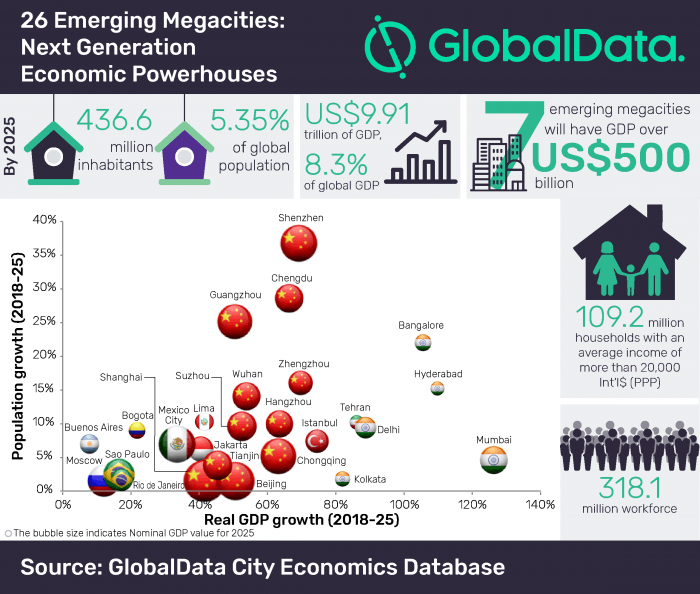 Tarun Bisht, Economic Research Analyst at GlobalData, says: “Emerging cities have a demographic advantage over developed cities as the population in emerging centres is significantly younger than those in the developed world. Increased education levels and employment opportunities have led to rapid urbanisation which is boosting consumption as people move to cities and join the growing consuming class.”

The working age population of emerging megacities is expected to grow at 8.3 percent between 2018 and 2025, compared to 1.0 percent growth of developed megacities during the same period. Furthermore, rising prosperity in these megacities has also enabled the emergence of a new wave of middle and affluent consumer classes, which aspire for better standards of living.

Consumer spending in emerging megacities is approximately US$4.2 trillion purchasing power parity (PPP) and GlobalData expects this amount to increase to US$6.3 trillion (PPP) by 2025, with 44 percent of it coming from megacities in China and India. Moreover, these megacities will be home to approximately 109.2 million households with an average income of more than 20,000 Int’l$ (PPP) by 2025.

Employers care more about saving costs than wellbeing, according to majority of workers Great expectations at work causing stress and rise in mental ill health