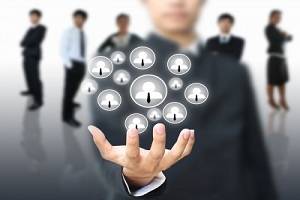 Seventy per cent of recruiters now actively use and support the use of social media and trust has grown significantly in online media over the past two years, according to new research. LinkedIn, Facebook and Twitter are the three most used social media channels among HR professionals and recruiters, with occasional use of blogs and videos. However, the research by Global HR Services Group Penna Plc shows that while engagement with social media is increasing, a quarter of employers are still trying to restrict Facebook access at work and have no formal social media policy in place.

An initial survey carried out in 2010 had found recruiters largely suspicious of the benefits of social media, with 51 per cent seeing it as “dangerous” and feeling “uncomfortable” using it. Two years later, this number has dropped to just 5 per cent, and there are now an emerging group of’early adopters who are actively encouraging the use of social media to their peers. 45 per cent of recruiters even classify themselves as “experts”, up from 23 per cent in 2010.

Graeme Wright, Head of Strategy at Penna said, “It’s no surprise to hear that social media usage has increased among recruiters and HR professionals, but what’s interesting is the shift in attitudes towards it, from a general reticence or fear, to embracing and recommending. It’s clear that having a social media strategy is now considered ‘the norm’.”

Conversely, 26 per cent of employers are still trying to restrict Facebook access at work, which presents obvious practical challenges. Says Wright: “Employers are risking a disconnect with Generation Z, who do not see the need to separate work and social life – which isn’t necessarily a bad thing, provided any policy is clear enough for the entire team to understand.”

The same applies to using social channels to access candidates. The report highlights an ongoing debate, with only 23 per cent having a policy in place, which leads to confusion and a reluctance to use Facebook to research a candidate background for example, in case it constitutes gross misconduct. As a result over 60 per cent say it is a “a concern that candidate information available online could get in the way of a fair recruitment process if used injudiciously”.

When it comes to making direct hires via social media, LinkedIn is highly regarded (with 12 per cent saying they have used it as a direct replacement for a consultant) and finding great talent. However there is still some confusion as to just how much this, along with other channels, can enhance recruitment practices and provide access to hard-to-reach groups.