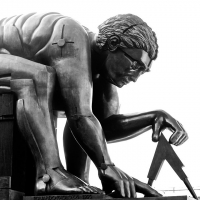 On the doorstep of the British Library you will find Edouardo Paolozzi’s imposing statue of Sir Isaac Newton. At first glance, this positioning seems to make perfect sense. Where better for a monument to the Enlightenment’s poster boy than raised on a plinth at the entrance to the world’s second largest library? And yet, there’s more going on here than is evident at first glance.

The statue is modelled on a series of watercolours by the visionary poet and artist William Blake, who created them to satirise Newton and the 18th Century belief that rational thought had at last triumphed for humankind. (If only, we might well say right now.) 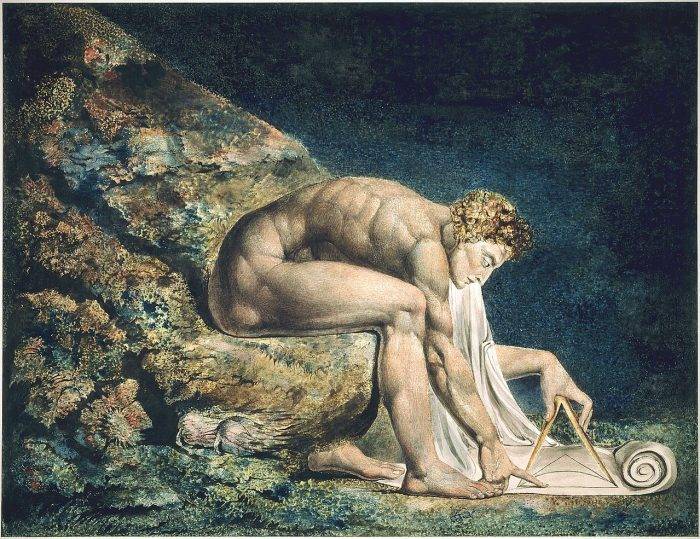 Paolozzi’s statue maintains some of this intent but, shorn of its original context, lacks much of its punch. In the original etchings, as in the statue, Newton is depicted as a God, buff and beautiful, a titan of reason. He is crouched over his work, a ‘divine geometer’ wielding a compass, then as now a symbol of science and divinity. Yet we also see that he has his back to nature.

Not some bucolic natural world but a colourful, primordial smear of lichens on rocks. Blake is mocking both Newton’s status and his inability to see every dimension of the world.

He is a  ripped superhuman whose focus on his work blinds him to the organic world. The image fades from the brightness of the organic on the left to the dimness of rationality around Newton’s parchment, an inversion of Enlightenment thinking.

For Blake this was Newton’s underlying flaw. He maintained that Newton presented a one eyed view of the world and it had become the default position of the right thinking of the era. Blake is not rejecting reason per se, just saying it is not enough. He believes those who rely solely on reason are ignorant of other truths. In a later poem contained in a letter he writes:May God us keep / From single vision and Newton’s sleep. 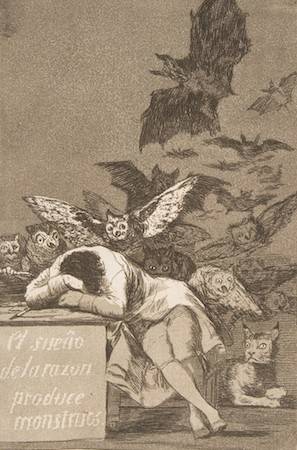 Another perspective on this was presented in a contemporary series of etchings produced by the Spanish artist Francisco Goya. In The Sleep of Reason Produces Monsters, Goya shows that a lack of rationality exposes us to horror, an idea that also maintains a great deal of resonance for us now. In both cases, an absence of a particular perspective from the subject of the artwork – in Goya’s case himself – comes to haunt them. In both, the criticism is that the subject is asleep to a truth.

Blake’s satire is complicated by the fact that Newton himself held some odd, mystical beliefs. His work has endured to the modern day and helped take us to the stars amongst many other things, but he was a lifelong occultist and alchemist.

His equations continue to define our world, but we also have him to thank for the fact that the rainbow is said to have seven rather than six colours. For mystical reasons, he couldn’t apply the number six when describing the spectrum, so shoehorned indigo between blue and violet to make up the numbers.

The economist John Maynard Keynes once said that ‘Newton was not the first of the age of reason, he was the last of the magicians’. So maybe the best interpretation of Blake’s depiction of Newton now is that its main purpose was to mock the idea of pure reason, at least as a way of describing the world in the absence of other viewpoints.

We maintain or pay lip service to this faith in rationality for the most part, but now with added data

We maintain or pay lip service to this faith in rationality for the most part, now with added data. Indeed the data sometimes seems like it’s an end in itself. Hence the number of stories we run based almost solely on numbers – days lost, hours worked, productivity, demographic groupings, space utilisation and the uptake of new models of work. To this familiar roster we can now add a new lexicon of experience, agility and engagement.

This reliance on workplace data to make judgements is almost certain to become more important as organisations make sense of the newly catalysed but well-established unshackling of work from fixed times and places. There is already evidence that firms are introducing data gathering apps for remote staff almost as rapidly as they are creating virtual meeting platforms.

All this might well be true and when implemented wisely might seem sensible or even a laudable enough goal. But there are already signs that the impulse to micromanage people with data remains, perhaps most notably in the six feet office concept that Cushman & Wakefield inflicted on the world, which uses sensors to identify people and managers when they are within six feet of colleagues and draw their attention to the fact with a sound on their smartphones.

We cannot hope for creativity and serendipity while crouched over equations, however well intentioned this  kind of thing might be. We really need to stand up and turn around to look at the colours as well.