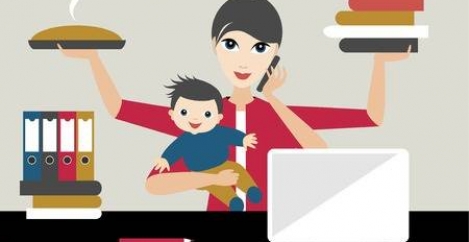 Flexible working is supposed to be a boon to working parents, but it seems it’s not without its disadvantages, as a new academic study has found that part-time working mothers who have the ability to control their own schedule often end up working an increased amount of unpaid overtime.  The research from the University of Kent found that for those who gained schedule control over their work there was an increase in the amount of unpaid overtime worked, as on average in the UK men work an extra 2.2 hours a week in unpaid overtime while for women it is about 1.9 hours.

This was found to be the case for both professional men (about one hour more a week on average) and women without children (about 40 minutes more a week on average). Notably, though, the research also found that although full-time working mothers did not appear to increase their unpaid overtime, part-time working mothers did work more unpaid overtime, with an average of around 20 minutes more a week.

For the new research, Kent’s Dr Heejung Chung, working with Dr Mariska van der Horst from the Vrije Universiteit Amsterdam used data from the Understanding Society surveys carried out between 2010-2015 to examine three types of flexible working that people use and how it impacted their workloads:

For the first two types of flexible working, there was little evidence of an increase in unpaid overtime hours, but they did not detect a decrease in overtime hours for this group either.

Dr Chung, from Kent’s School of Social Policy, Sociology and Social Research, said: ‘More control over your work is supposed to make life easier for workers, particularly those with children. However, it is clear that for many, blurring the boundaries between work and home life expands work to be longer, even when it is unpaid. Employers need to be aware of this and ensure staff are not over-stretching themselves and undoing the benefits of flexible working.’

She added: ‘Another point to note is that unlike popular perceptions, we also do not find much evidence that those who take up flexible working arrangements for family/care purposes reduce their work loads. Employers need to be made more aware of this, to tackle our perception against those working flexibly.’

The research, entitled Flexible working and unpaid overtime in the UK: The role of gender, parental and occupational status has been published in the journal Social Indicators Research. Special Issue: Flexible Working, Work-life Balance, and Gender Equality.