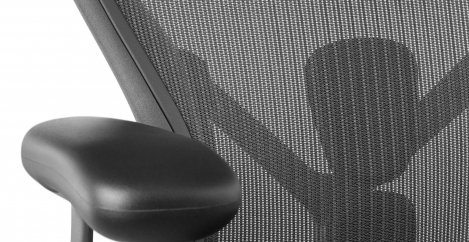 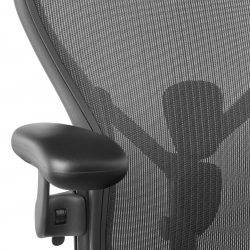 Office furniture giant Herman Miller has today unveiled a new Aeron chair. The Aeron is now the world’s bestselling chair of all time, but when it was first launched in 1994, it was unlike any chair the world had ever seen. Instead of a padded seat and back, designers Bill Stumpf and Don Chadwick did away with foam and fabric to create a ‘machine for sitting’. Although Herman Miller later confessed that they had misgivings that the chair’s radical design would lead to its rejection in the market, instead Aeron quickly became the most recognisable performance chair in history, with over 7 million sold in 134 countries and a staple in popular culture. Herman Miller’s new Aeron retains the distinctive silhouette of the iconic chair, but every component of the design has been updated to raise the bar for performance seating, according to the firm. With the input of original co-designer Don Chadwick, and a team of scientists, engineers, materials specialists, and researchers who worked on the project for over two years, Herman Miller claims to have enhanced the chair by combining the latest insights in anthropometrics and ergonomics with two decades of advancement in materials, manufacturing, and technology. 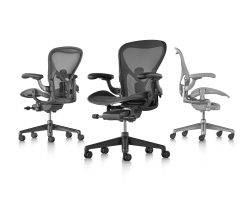 Staying in one position reduces the natural pumping action of the muscles that deliver nutrients to the intervertebral disks. The Aeron chair’s tilt allows it to move with the body in such a natural way that people can shift from forward to reclining postures intuitively. The new Aeron’s slimmer, updated tilt mechanism delivers an even more seamless experience of movement (and stasis) to the sitter through a smoother trajectory and optimal balance point. Aeron is designed to keep people in contact with the back of the chair and in control of their continuous movement throughout the entire range of recline.

While the classic Aeron supported numerous positions and postures, the frame angle of the new chair has been adjusted 1.8-degree forward to better support the body in the upright position and across a wider range of postures.

With the goal of promoting natural, unforced, spinal alignment and muscle balance even when the sitter is not in a reclined posture, PostureFit in 2002 became a critical element of the Aeron chair’s health-positive design. The technology was developed to provide back support that comfortably sustains the pelvis in its natural forward tilt—the position the body holds while standing powerfully upright. It did so by adjusting to fill the void between the contours of the sacral-pelvic area and the backrest.

Today, by incorporating adjustable sacral and lumbar support, PostureFit SL brings the technology to a whole new level, according to Herman Miller. It supports the sacral region to nurture the natural S-shape of the spine, rotate the pelvis forward, and activate healthful posture—all while sitting upright. A secondary pad provides comfort and support to the lumbar region of the spine. Together, they help strengthen the spine to produce what Herman Miller calls “power posture.” PostureFit SL puts the sitter in complete control of his or her posture with the new Aeron’s premier spinal support system.

New 8Z Pellicle offers eight varied zones of tension in the seat and back. Designed around the human anatomy to better envelop the sitter, the tightest zones provide firm support where needed, while more compliant zones conform to the sitting bones and distribute weight evenly. Woven with nine unique shades of weft yarn, 8Z Pellicle offers a richer tonality and works seamlessly with the new Aeron’s three material palettes, according to the manufacturer.

Aeron’s original design made it possible to adjust the amount of recline and resistance to the sitter’s liking. Depending on a person’s scale, this involved up to 50 turns of the tilt mechanism. The new chair offers updated user adjustments for intuitive, fine-tuning; advancements in engineering have allowed Herman Miller to scale back the amount of turning, twisting, and time spent customizing a personal fit. Now the sitter can reach a custom recline with minimal effort.

Additionally, an updated arm mechanism allows not only for up and down adjustments, as with the original Aeron Chair, but a greater degree of personalisation through front to back, and side-to-side adjustments.

To meet the needs of the broadest possible set of body types, Aeron was designed in three proportional sizes. This approach to inclusiveness became an integral element of Aeron’s DNA. The new Aeron Chair is available in the same, anthropometric A-B-C sizing.