There is very little about flexible working that is actually flexible 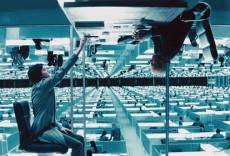 It’s pretty clear why some of the world’s greatest writers have been drawn to the human propensity for moral and linguistic inversions and subversions. Books like 1984, Catch 22 and A Clockwork Orange are predicated on the idea. And it’s not one limited to literature. If we look, we can see it going on all around us. In the field of workplace design and management we can see it in the use of the word ‘flexible’ as used in the phrase flexible working. This is a word that in this particular context is coming to mean something like its opposite.  According to a survey from YouGov, the 9 to 5 is a thing of the past, supplanted by a style of work labelled flexible but which involves a third of us working for over ten hours a day, many at home right up until the point we go to bed with a smartphone that sits by our side, to wake us with a beep and a wodge of new notifications the next morning.

The word flexibility in its traditional sense implies a degree of choice in the way we work, both in terms of time and space. This is what the netmums at mumsnet mean when they start threads about flexible working and it is what legislators in places like Malaysia and California mean when they follow the UK in introducing laws to give people the right to request flexible working.

The reality is that people don’t make the choice between working in an office or at home or on the train or in Starbucks or while out for a meal or a walk, but do it all. We are doing it because the technology inveigles itself into our routines and because our employers and clients expect us to. The YouGov survey found that over half of businesses (51 percent) believe that customers are becoming more demanding when it comes to getting hold of the right person the first time and getting an urgent response to queries (55 percent).

The research commissioned by (what else?) a cloud-based business communications systems firm called RingCentral, found that more and more companies also believe that providing employees with the ability to work flexibly (78 percent) or from home (60 percent) are important for employee productivity. Because clients now expect responses from their suppliers within just three hours, over three-quarters (77 percent) of us respond to work emails after 6pm while two-thirds (67 percent) of us answer work calls in the evening.

There is little or nothing flexible about all of this. It is a new form of rigidity. It is a subject we will return to later today in an interview with the author Greg Lindsay, one of the speakers at this year’s London Worktech conference.