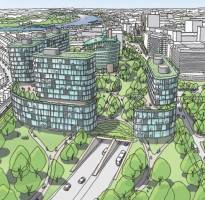 The Mayor of London has revealed the latest plans to move the city’s pedestrians, bikes and cars underground and elevated on decking. The latest proposals would see a number of the capital’s major roads mounted or buried with the space saved at ground level converted to greener and more pleasant uses (and property development obv).  An announcement from the Greater London Authority claims that over 70 sites across London have been considered for the scheme which will include new tunnels, fly-unders and decking. It follows hard on the heels of another proposal to create the Underline, a network of cycle lanes and walkways based on the city’s existing web of unused tunnels. The roads proposed for the new scheme include the A4 in Hammersmith, the A13 in East London and sections of the North Circular Road.

Mayor Boris Johnson says that Transport for London will now work with local London boroughs to develop the proposal ahead of a further announcement in May.

The London Underline concept has been proposed by Gensler as a way of using the city’s disused tunnels used as a network of cycle and footpaths. Not only will this make it far easier for pedestrians and cyclists to make their way around the city, it will do much to alleviate the much publicised risks faced by these vulnerable road users.

Gensler claims there are unused tube tunnels, exchanges, stations, and reservoir chambers including those on key routes between Green Park and Charing Cross Road and between Holborn and Aldwych. The London Underline concept was recently awarded Best Conceptual Project at the London Planning Awards. The next step for the project is to undertake a feasibility study that would determine what would be required to transform spaces.