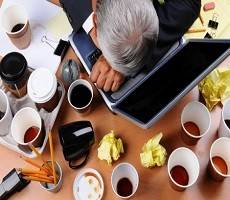 I used to have a boss whose solution to dealing with all his paper-based correspondence was to simply let the detritus build up. When he couldn’t see  his desk any more, he would draw his hand across the desk and dump the whole lot into the bin. Invariably he’d miss something important and would often have to search the bin to find an important letter, invoice or memo. I had another boss who ate so much food over her keyboard that it had to be taken away and cleaned – a disgusting job, according to my colleagues in IT. So despite reading with some cynicism that a cleaning company has published new research which proves offices that cut corners on cleaning, or allow employees to work in messy, disorganised surroundings, are far less productive than clean, well-ordered offices; I must agree it shows the benefits of a clear desk policy .

The review by the national Contract Cleaning company says that people employed in offices with a low emphasis on a clean working environment spend less time in the workplace and don’t work as hard when they do sit at their desks.

The survey of 300 offices in the UK, found workplace productivity plummets where there are overflowing bins, dirty toilets and a lack of organisation.

“Dirty, disorganised offices are the scourge of productivity,” said ContractCleaning.co.uk spokesperson Mark Hall, “Some bosses need to take a good, hard look at their places of work and ask themselves why their staff are so miserable.”

Over 1,500 workers in 300 offices were asked whether they thought their workplace was clean or dirty, and whether this contributed to their efficiency and enthusiasm for their jobs.

In offices where staff thought that their place of work cut corners on cleaning:

“It’s clear – dirty and disorganised offices hit businesses where it hurts the most,” said Hall, “Productivity slips, absenteeism soars and that has a negative effect of profits.

On the other side of the coin, offices with regular cleaners, kitchen facilities, regularly serviced toilets and well-organised ways of working see both productivity and attendance soaring.

One staff member at an insurance company commented: “We didn’t like it when they introduced a ‘clean desk’ policy, but it’s really made me enjoy my job so much more. In the past, my desk was piled high with paper – now I can see the people I work with!”

An office worker at a garage chain explained why they preferred long pub lunches: “The toilets are dirty and the kitchen area’s never been cleaned since I started there. I only go in to update my Facebook.”

Said Hall: “While we as a company has an obvious interest in the matter, cutting costs on cleaning is a sure-fire way to destroy staff morale and to wipe out productivity.”