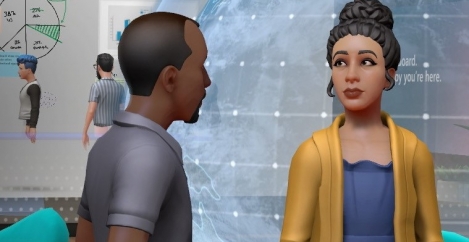 The Metaverse in the workplace: Meta’s wobble may affect how we use emerging technologies 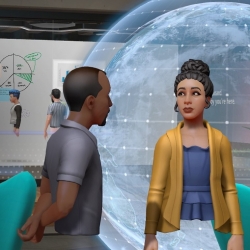 There has been much talk over the past two years of the adoption of hybrid working for elephant-in-the-room reasons and it is now the case that the practice is being widely adopted by many organisations. Knocking at our office doors now is the next big talking point in terms of technology: the Metaverse. There has been much speculation recently on how this collective, virtual open space, which incorporates environments including those in which to shop, learn, be entertained and, of course, work, will evolve. It has been described as the ‘next chapter of the Internet’ and is created by the convergence of virtually enhanced physical and digital reality.

In a report by Gartner published in January, the analyst firm states that by 2026 they expect a quarter of people will be spending at least one hour a day in the Metaverse doing the activities as described above, including at work. That’s a quarter of the population in just four years.

However, also in January, Facebook’s Meta shares plummeted by 25 percent following a reported decline in quarterly profit. The one-day crash wiped more than $200bn off Meta’s valuation – the biggest collapse in market value for a US company. Several factors were blamed, among those the struggle to attract younger users, competition from TikTok and the new privacy changes to Apple.

This experience for Meta, adding in corresponding market forces, could affect what a Metaverse workplace may look like, as other players will likely take advantage by creating ‘Multiverse’ alternative offerings with other emerging solutions. Employers are going to have to be agile and be able to grapple with how they would use the technology for the best experience of their employees while ensuring productivity remains constant.

One example is the field of Virtual Reality, Augmented Reality and Extended Reality (VR, AR and XR). Cisco has been experimenting with the new Webex Hologram AR solution for meetings and Microsoft Ignite is putting XR functionality into its Teams app. The demand for collaborative VR environments comes as companies embrace hybrid working, because the technology could be the key in keeping office and remote staff connected. However, success in using these will be minimising the fatigue experience in using bulky and uncomfortable headsets.

Additionally, there are currently serious questions about how quickly the hardware used in VR can support an eight hour schedule and the initial reports are bleak at best. A prime example is when working on a laptop wearing a headset, the user cannot see the keyboard, so first class touch typing skills are a must, then on a routine level, there’s blindly feeling around for, say, a cup of tea and being able to drink it without spilling it onto the laptop.

In terms of what the workforce will look like within a metaverse, the reality is that it doesn’t matter if the future is a Metaverse, Microverse or Googleverse, the challenges are the same as they were last century. The move away from commuting five days a week to an office will be exacerbated by a world with both virtual and physical manifestations and one of the biggest challenges will be balancing the value of the virtual with the reality of in-person benefits.

Meta’s push – and its competitors in the Multiverse – will be to encourage everyone to engage with their platform. The challenge for the workplace if adopting the technology will be navigating the new and emerging trends and making them a reality faster than their competitors. The virtual space by its very nature can shift much faster than anything most employers have seen before and that takes a seismic shift in approach to not get left behind.

Organisations will have to accelerate their innovation and agility investments to stay ahead of the rapidly shifting landscape. While there are obviously challenges to overcome and reach the positive possibilities a workplace Metaverse may bring, we look forward to seeing a bright future for it ahead.