More than half of twenty-something UK men would like all male offices, claims survey 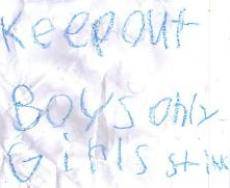 At Insight we report surveys from firms on an almost daily basis. We generally do so without too much comment, trusting that readers are smart or jaded enough to apply their own filters based on whichever company is responsible and the number of people surveyed before dusting them all with a liberal pinch of salt and coming to their own conclusions. Even so, here’s one that may need more seasoning than most. According to a new survey from business supplies company Expert Market, slightly more than half of the UK’s male workers under the age of 30 would like to work in an all male environment, mostly based on the idea that this would mean less flirting, fewer arguments and more work.

Nearly all of those expressing such a view claimed that a single sex workplace would be more efficient and productive. A quarter of the men questioned as part of the survey of 1883 staff said less time would be wasted on flirting even though a third (30 percent) thought they’d enjoy work more with attractive colleagues. Ten percent claimed there would be fewer arguments (possibly because there would be no women around to kick off about their antediluvian attitudes).

Women are not immune from the desire to work in a single sex environment if you believe the survey. Just under a fifth (17 Percent) of under 30s wanted to work in an all female environment.

Attitudes appear to soften with age. Overall, only 8.5 per cent of all women surveyed wanted to work in a women only office although slightly more (13 percent) claim that it would lead to a more harmonious environment. Meanwhile a quarter of men of all ages (24 percent) thought that work would be better if only boys were allowed.

If that all seems a bit too much, we recommend as an antidote our recent report on the growing numbers of women working at senior levels in UK organisations which you can find here.