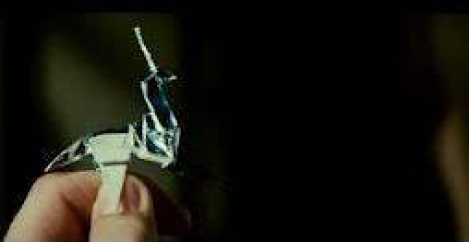 Ridley Scott was one of the pioneers of a film aesthetic that mashes the past with the future, the grime and the gleam. It was a pioneering idea at the time but it’s familiar now. We now accept that the future looks a lot like the past and that goes for the office design in this scene. BladeRunner is also a film about dreams. The dreamy setting here is a telling  contrast to the dirt and sleaze in the City below and the scene in the office in which Deckard (Harrison Ford) interviews the classic femme fatale Rachel (Sean Young) also supports the unresolved notion that Deckard may be a replicant himself. Clearly the workplace smoking ban had been repealed by this time, but then where would a femme fatale be without a cigarette? Even if she is an android.