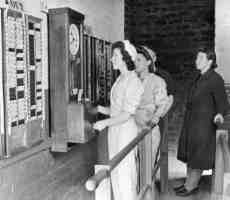 We’ve always known that many of us have a tendency to come into work when ill even though we would  be better off staying at home, but the problem of people turfing up in the office when they should be in bed or a GP’s queue is worsening according to a new report from insurance company Canada Life. Knocking into a cocked hat all the various surveys which detail the UK’s ‘working days lost’ due to stress?snow/The World Cup/hangovers and idleness, the survey claims that as many as 93 per cent of UK employees have hauled their diseased carcass into the workplace when they really shouldn’t, threatening their own health and the wellbeing of those around them.

So ingrained is this desire to appear untouchable by micro-organisms that over a third of the 1,000 people surveyed (36 percent) said they would rather deal with sickness by booking time off as a holiday than concede they aren’t doing so well. This type of presenteeism can be very problematic according to the report. It found that 81 percent of people had been infected by colleagues and 82 per cent of respondents said they performed worse when ill. Sadly, the report doesn’t question the remaining 18 percent in any detail, which is a missed opportunity.

The reasons for presenteeism are also interesting. Three quarters (76 percent) came in because they didn’t think they were ill enough to warrant a sick day, nearly a third (31 per cent) were worried about their workload, a fifth (20 percent) were concerned about financial implications, a similar number were worried about how it would look to their colleagues and a surprisingly low 13 percent were concerned it might harm their career by making them more susceptible to redundancy.

Self diagnosis was evident in the fact that a third said they would come into work with flu (by which they probably mean a heavy cold because nobody would be able to go to work with proper flu) and 14 percent would try to get through the day even when dealing with a serious stomach bug which doesn’t bear thinking about. Fully 80 percent of people would not take time off for stress related illnesses, which may highlight how people view stress compared to straightforwardly physical ailments.

Paul Avis, marketing director at Canada Life Group, said: “It is worrying the UK’s workers are so reluctant to take time off even when they are genuinely unwell. Anxieties about a heavy workload, risk of redundancy and criticism from other colleagues are preventing employees from taking the sick leave that they need, yet are also no doubt exacerbating certain conditions, particularly those that are stress-related.  Employees should not be discouraged from taking time off when they are genuinely unwell, as presenteeism creates not only an unpleasant working environment but also one that is counter-productive. Staff need to feel that they won’t be penalised for taking sick leave and organisations should ensure they communicate their support.”