On target for a toxic workplace culture

Setting clear and bold targets has become part of leadership 101. We take it for granted that the first action for anyone taking over the helm of a business or team is to state or re-state targets. The rise of “management by objectives” in the 1970s drove the initial focus on target-setting and, in line with shoulder pads and lapel width, the 1990s saw a shift in management culture to ‘bigger is always better’. In 1994 Jim Collins and Jerry Porras wrote their highly influential best seller Built to Last. In it, they memorably wrote of the power of BHAGs – big, hairy, audacious goals. Targets were no longer for hitting but represented something bigger, a longer-term vision of the future.

However, now more than ever we live in an age of measurement – from the watch on our wrist counting our every step, to our obsession with real-time feedback from social media. We are drowning in data, and with such abundant measurement, we are entering a third era of target-setting that combines stretching goals with forensic measurement.

But why do targets matter and how do they impact culture? The power of a target is that with a simple statement of intent it is possible to achieve several quite different things.

A big target gives teams permission to try something new

The first job is a symbolic one. A bold target shows confidence and self-assurance, and that those in charge know what they are doing. We like our leaders to have vision and an ability to see what perhaps we can’t. It can be very attractive for the team, investors and customers alike.

The second job is one of unification – a well expressed target can bring a team together. A target can create a common sense of challenge or a call to action in pursuit of a higher cause or to bring down an enemy. It brings teams closer in these situations when the need to work together foregoing personal, petty or political differences is greater than ever.

The third job is to create a sense of freedom. A big target gives teams permission to try something new. It says that the old ways were not the best and perhaps there might be a better approach – there is an opportunity to break free from the status quo, to leave the “comfort zone”. This freedom can be hugely empowering, with all the benefits that brings.

The final job is perhaps the most practical, and that is to bring transparency. A clearly stated target can be a ‘North Star’ against which key decisions are made. It sets the rules for how and why decisions are made. There is an honesty and openness when the end goal is stated, and the means can be discussed with this is mind.

A multitude of benefits

Clearly therefore with this multitude of benefits, culture can be created and enhanced by target setting. So, with this bundle of benefits on offer, surely the bigger and bolder, the better?

However, it is not quite that simple. A target is a promise. The problem with a promise is that it needs to be kept, and the bigger the promise the harder it is to deliver. There comes a point when a bold stretching target becomes a toxic one. This toxicity takes several forms.

The first is the erosion of credibility. A leader who states a big target needs to back it up both in terms of resource and decision making. A misalignment of ambition and commitment creates a culture where promises do not need to be kept and leaders can be accused of being “distracted dreamers” setting “unmet, and often unrealistic expectations”.

No one wants to work at a place where numbers are pulled out of thin air. As a society we are more cynical than ever and have highly tuned BS detectors in all aspects of our lives. Leaders would do well to remember this – targets turn toxic if they are not backed up with the commitment (in the form of the right resource, people, skills and risk/decision making) required to deliver it, or at least get close. High performance teams operate in the “Stretch Zone” where ambition and commitment are aligned. 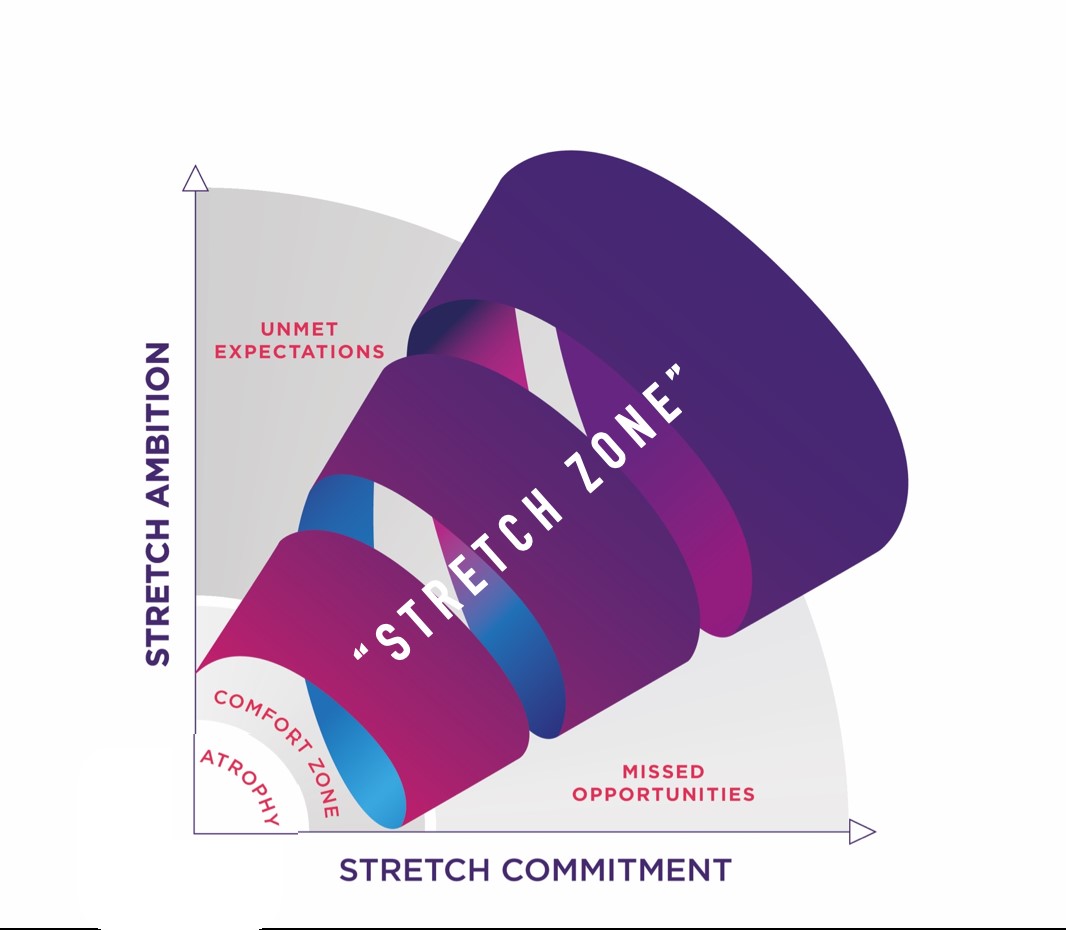 The other challenge is that progress is key. Many targets are often not meant to be hit – a five year target would see out at least two management teams in most large corporations. Having said that, we live in a data-driven age, where we track everything, so there is a constant demand to see progress, to give reassurance and confidence that everything is heading in the right direction.

However, the cost of achieving stretching targets can be huge. A crazy, bold target can encourage crazy, bold or reckless behaviours. Like Rosie Vivas, who famously won the Boston marathon in 1980 by taking the subway, the pressure to perform can lead to short cuts. We see this in the form of accounting scandals such as those seen recently in a variety of UK based businesses – Tesco, Carillion, Superdry, Ted Baker, and Patisserie Valerie. It is what the CMA call the “expectancy gap” – the target is too big and progress is not enough, so the gap gets filled. It’s not just the numbers which get impacted.

In the USA a number of very heavily funded tech companies have been accused of making false claims – the most spectacular being the recent implosion of Theranos. The blood testing firm led by Elizabeth Holmes was at one point worth over a billion dollars, making her one of the richest, self-made women in America. The valuation was built on false claims and she is now facing prison. Targets impact behaviours – sometimes the wrong ones.

How do we avoid setting toxic targets

Well, not having a target in the first place and opting out altogether, is not an option. In our experience working with fast growth and high-performance teams a clear and stretching target is central to success, but like the chevrons on a motorway whilst it is visible and ever present it remains tantalisingly just out of reach.

The first step is a simple test – do targets pass the “red face” test. Is it realistic? Is it credible? Does it challenge or embarrass? It is worth considering multiple metrics across a range of time spans to capture short term progress in the service of the longer term target?

Secondly, targets should be about more than just growth. A big consultancy firm somewhere is selling an awful lot of “double the business in the next 5 years” strategies. Such aggressive growth for growth’s sake can corrupt cultures – especially if they are set without the “why”. Target sets direction of travel and even the destination, but it doesn’t capture the reason for the journey. When things get tough this motivation is more important than the numbers alone. It is part of human nature to want to contribute to something beyond ourselves, but it also human nature to consider why it matters.

Finally, does the ambition align with the commitment? Are companies and teams in the “Stretch Zone”. There must be both a clear sense of what we want to achieve (and why), but also an understanding of what we will have to do to get there.

Nick Pye is co-founder of growth and innovation consultancy Mangrove and co-author of Stretchonomics: The art and science of success. Main image: A woman using a sextant from the Library of Congress