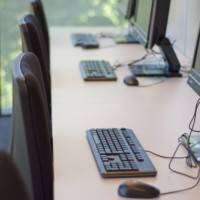 For half a century the default office design model in large parts of the world has been the open plan. Even though that continues to be the case, a growing number of voices are questioning this hegemony and suggesting there may be better ways of designing offices that balance the advantages of the open plan while eliminating or mitigating drawbacks. On the face of it, the case for working in open plan offices is clear cut. Not only are they believed to be more conducive to collaborative work, open plan workstations take up around half the space of cellular offices. As well as taking up less space, a crucial consideration is that fit-out costs are typically around 25 per cent lower, even in eye wateringly expensive commercial property hotspots such as London.

Then again, there also good reasons for the current questioning of the role of the open plan as the default office design model, especially the notion that they make people more productive and foster collaboration. A lot of the time – both now and in the past – the hankering for four walls and a door if not a corner office has been a matter of status.

But there are some very good reasons why people may want to lock themselves away that are nothing to do with their place in the hierarchy and the main one is to achieve a greater or lesser degree of acoustic and visual privacy. The challenge of providing the necessary degree of privacy in an office is one of those issues that everybody accepts is important and has at least some understanding of. Yet it has proved to be one of those issues that suffers both from some important misperceptions and which also has to be balanced against other challenges when it comes to designing offices.

When people don’t get the privacy they need problems follow and in recent years they have become more acute as the technology with which we work has not only become louder and more obtrusive but also directly led to the shrinking of workstation sizes. Where once desks had to accommodate piles of papers, files and a massive CRT monitor, they may now only need to have space for notes and a laptop.

We’ve been aware of the associated problems for some time but we now have the research to understand more about them. Recently researchers at the University of Sydney published the results of a survey of nearly 43,000 US office workers and applied their findings to some of the most commonly held beliefs about open plan offices, not least the assumption that they ‘facilitate communication and interaction between co-workers, promoting workplace satisfaction and team-work effectiveness’.

What the research shows is that the thing that bothers people most about noise level per se but rather their lack of privacy, both in terms of hearing what other people are saying and having their own conversations overheard. While a quarter of the survey’s subjects said they were dissatisfied with the level of noise at work, over half of the huge sample of workers in open plan offices cited their lack of acoustic privacy as a major frustration at work. Crucially and counter-intuitively they also found that those workers with a higher degree of privacy are most likely to share information with colleagues, safe in the knowledge that it is only going to those intended. Similar points were made in a 2013 report from architects Gensler.

This is not to say that the open plan has nothing going for it. What it suggests is we may need to provide a proper balance and that is the crux of the current debate. The situation is complicated by the fact that, while open plan is a globally accepted principle, what it means in practice can vary significantly. In Europe for example, the model most commonly used is based on the 1950s principle of Bürolandschaft (office landscape), an idea first developed by German designers – and named by the Hamburg based Quickborner team – to encourage a more egalitarian and collaborative working culture. This has evolved into the familiar open plan with clusters of desks and low screens commonly seen in Western Europe as well as further afield. 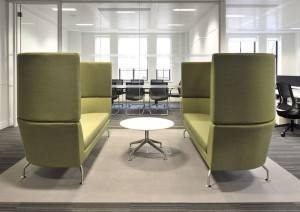 Cwtch by Orangebox, part of the recent generation of privacy products to supplement open plan working

The American experience is defined by the cubicle which in turn has its roots in the work of Herman Miller designer Robert Propst in the late 60s which led to the panel systems so mercilessly lampooned in the Dilbert cartoons.
What is evolving to replace these systems is an office design model that creates open task-oriented zones. People are free to choose where to work depending on what they are doing and their personal preferences. Although modish, this idea is not new. In Europe, the idea of the ‘combi-office’, a mixture of shared cellular and open-plan space has been widely used for some time. A similar principle was espoused in the US in the 1990s, including a variant usually referred to as ‘caves and commons’ which Stewart Brand describes in his book ‘How Buildings Learn’ in this way:
“Each office worker has a private office, often small, which opens into a generous open area surrounded by many other private offices. The open area has a kitchen, some couches, sometimes tables for sitting around informally, and sometimes a working library, or at least a rack of current periodicals. You can shut the door of your cave and concentrate, or you can leave your door open and keep an eye and ear on who’s coming and going in the commons, and whether the meeting or presentation going on there might be worth leaning in on.”

The provision of zones for private and interactive work is relatively complex compared to the more straightforward open plan so depends on a thorough understanding of and organisation’s needs as well as the people who work for it. This understanding starts from the basic premise that while there may be a good economic argument for the open plan and an admission that some privacy must be sacrificed in the interests of communications, there is a tug back in the other direction that has its own logic and its own business case. The challenge is to make informed decisions based on the variety of office design models and workplace cultures we can now apply to strike the right balance.