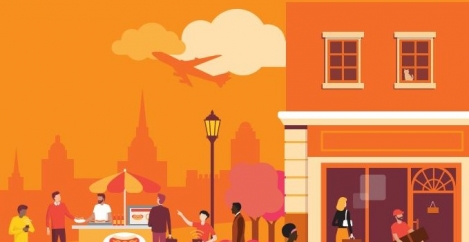 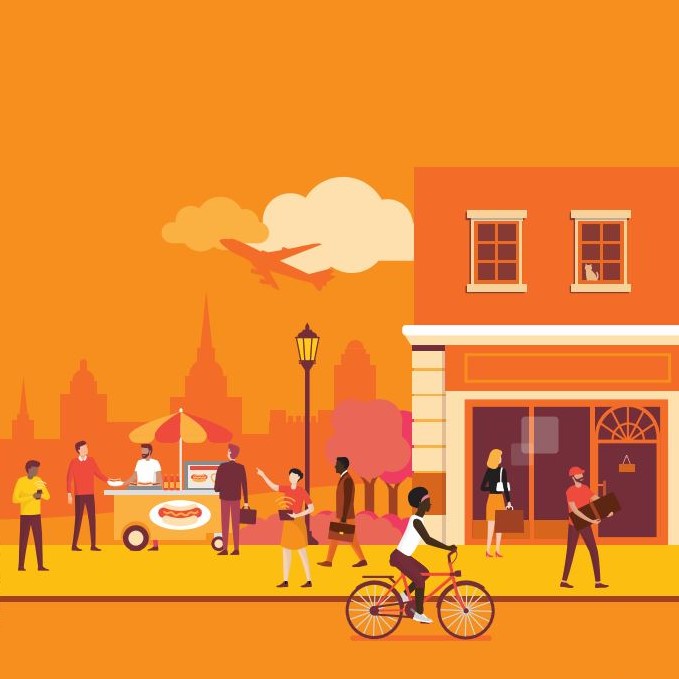 Oxford has been recognised as the top performing city in the UK to live and work for the fourth year in a row in a nationwide study carried out by PwC. The city has emerged ahead of Reading thanks to work-life balance, income, transport and skills with Bradford being crowned as the most improved city. Published today (12 November 2019), the annual Demos-PwC Good Growth for Cities 2019 sets out to show there’s more to economic well-being than just measuring GDP. The index measures the performance of 42 of the UK’s largest cities, England’s Local Enterprise Partnerships (LEPs) and ten Combined Authorities, against a basket of ten factors which the public think are most important when it comes to economic well being. These include jobs, health, income and skills, as well as work-life balance, house-affordability, travel-to-work times, income equality, environment and  business start-ups.

For the fourth year running, Oxford and Reading have been named the top-performing cities on PwC’s Good Growth for Cities 2019 index, followed by Southampton in third place. Although Reading has maintained its position in this year’s index, it has seen a decline in its overall index score, driven by lower house price to earnings ratios, income inequality and a fall in new businesses created.

Bradford emerged as this year’s top improver, driven by jobs, work-life balance and skills amongst its 25+ year olds. Bradford has experienced a large reduction in its unemployment rate, measured at 4.1 percent in 2018 compared to 10 percent in 2015. The city also demonstrated moderate improvements in work-life balance, health, environment and skills amongst the adult population.

In an era of political, technological and environmental disruption, cities and regions that want to get ahead, need to do things differently

PwC partner and local government leader Jonathan House, commented: “In an era of political, technological and environmental disruption, cities and regions that want to get ahead, need to do things differently. Even with the uncertainty of Brexit, over the last year, local leaders have had significant success in delivering good growth in their cities and regions. Our research shows the need to take a comprehensive approach to growth, focusing on improving productivity to compete on a global stage, but also on ensuring fairness and inclusive growth so that people and places don’t feel left behind.

“Local leaders need to take a broad view on what economic success means, focusing on the outcomes they want to achieve in terms of inclusive growth, community resilience and improved experience, and crucially, having a plan to translate those ambitions into reality.  Skills amongst the working age population, alongside the number of new businesses created, have seen the largest improvements; this is a result of leaders focusing on building new opportunities and investing in the talent of their city and region.

“The UK’s cities are known globally for their skills, innovation and entrepreneurial spirit. Our most successful cities don’t compete against other UK cities, they compete against cities across Europe, the Middle East and the US. As the UK’s position on the world stage shifts, cities and regions will need to reposition themselves too, and consider how they can stand out and compete globally, improve productivity and support innovation, while also creating places that are fair and inclusive. ”

This year’s index sees almost nine in ten cities in 2016- 2018 having scores higher than the average for all cities in our base year of 2011-2013, highlighting the rate of recovery since the financial crisis. There is strong employment growth, which reflects the continued decline in unemployment, as well as improvements in work-life balance, perhaps as a result of more flexible working patterns becoming more acceptable.

The long term data suggests that performance over time on the index is not driven by a city’s starting position, but rather by a combination of local and national improvements in the economy. The figure right shows the change in average good growth index scores by variable across all cities since 2005-07 and 2016-18. Skills amongst the population of 16-64 year olds, alongside the number of new businesses created have seen the largest improvements in average scores over the period, however housing affordability and owner occupation have deteriorated over the period, alongside rising average commuting times. 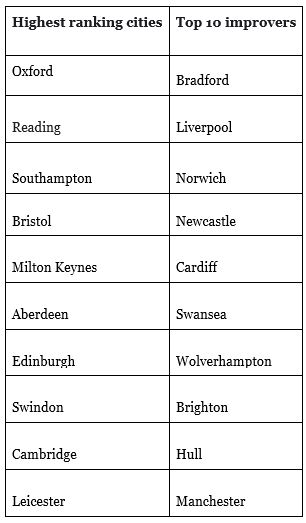 The short term data tells a different story, as 11 cities in the index have witnessed a decline in their score relative to the previous index – this is partly driven by the fact that improvement (especially for top performers) has hit a relative ceiling.  However, the price of success has become increasingly evident, with declines in transport and housing highlighting the ongoing infrastructure challenges faced by UK cities. There has also been a decline in skills among young people (16-24) and a decline in overall health.

This year’s index has seen continued improvements in index scores across the UK, driven in particular by falling unemployment rates and increases in new business per head. Whilst there have been strong job improvements, these have reflected a continued decline in house price to earnings ratio. More affluent cities typically have higher overall scores than their less affluent peers, however this also means they typically have lower scores in the areas of housing affordability and ownership, particularly in the case of London.

PwC chief economist John Hawksworth, said:  “Our long term analysis shows that good growth improvements across the UK since 2005 have been largely driven by skills and new business creation. As the economy and world of work transforms, ensuring people are equipped with the digital and other skills they need for future jobs will remain critical to sustaining these improvements.

“But there are also less positive long term trends, particularly relating to deteriorating housing affordability and ever longer commuting times. These issues will require sustained investments in affordable housing supply and transport infrastructure in order to address.

“This year’s index results has shown continued broad-based improvements across most UK cities, but there are also signs that progress has plateaued, particularly among top performing cities in the index where unemployment rates were already very low. Increased investment in health, education and skills will be important to drive further improvements in the index now that the post 2008 financial crisis task of reducing unemployment rates has been met in most parts of the country. ”

Previous PwC research found that for those who can afford to buy a house in England, it will cost, on average, around £25,000 to live near the best performing state schools. In addition, PwC’s July edition of the UK Economic Outlook also found that rental affordability ratios in the UK have deteriorated, with some key workers now priced out of the rental market in London and the South East.