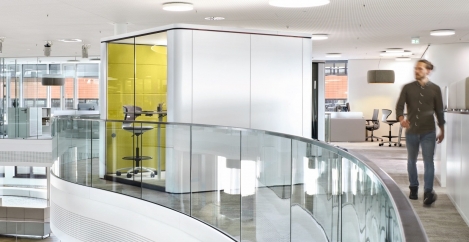 Personal space is not merely an issue of hygiene, but a biological imperative 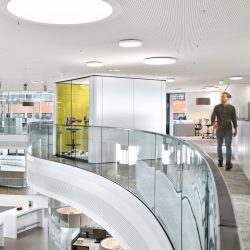 The current debate about how much space we will need in the office from now on is not new. As with many of the debate’s facets, the point at which we find ourselves has long been our destination. We’re just here earlier than we might have expected.

For many years the world’s major corporate real estate researchers and trade bodies have been tracking the changing spatial dynamics of the workplace. Even before the pandemic, the office has been serving many more people than ever before.

Not only was there a reduction in the footprint of the average workstation, but the proliferation of agile workplaces with many more shared spaces highlighted the changing relationship between the office and the people within.

According to the last British Council for Offices specification guide from 2019, the amount of personal space allocated to each individual in a building has fallen dramatically in just a few years. This fall has been a consistent point raised in each of the recent editions.

Yet there is a constraint on how far this process can go and it is to do with the distance people expect to have from each other. This has always had social, personal and cultural components but now has the added variable of hygiene.

We are not just creatures that exist within our skins. We extend out into the world in other ways.

There is some strong science behind this. Anthropologist Edward T Hall is the father of proxemics, the name we now give to the study of personal space. Hall claimed that people typically have up to four zones of comfort. These are dependent on the level of intimacy with the other person, and are classified as ‘intimate’, ‘personal’, ‘social’ and ‘public’. Get these wrong and you add to the stress people feel about being around their fellow humans. It’s important to know where to draw the line.

Researchers now also talk about peripersonal space, referring to the immediate area around our body. We are not alone in possessing this characteristic. It exists across the animal kingdom. The Swiss zoologist Heini Hediger, whose work on the design of the Tierpark Dählhölzli in Bern, Basel Zoo and Zürich Zoo acknowledges how animal react to the proximity of other creatures, especially predators.

We have a very similar biological hardwiring. We are not just creatures that exist within our skins. We extend out into the world in other ways. The significance of this fact explains why intrusions into the peripersonal space can be perceived as threats and violations of the self.

In a series of experiments with macaques, the Italian neurophysiologist Giacomo Rizzolatti discovered how threat-associated regions of the brains light up not only when the animals are touched but also when lights are flashed around them.

There are also cultural aspects to the issue of personal space. A study led by Polish scientists and published in the Journal of Cross-Cultural Psychology found that the British are (unsurprisingly) more stand-offish (literally) than people from other countries. We like to keep a metre (a little over 3ft) between ourselves and a stranger, 80 cm from an acquaintance and just over 50 cm from an intimate or close friend. Argentinians, meanwhile, preferred a mere 76 cm distance for a stranger, 59 cm for an acquaintance and 40 cm for a friend.

All of this has ramifications for the way we design working environments of course. Feeling uncomfortable about the intrusion into our personal space is not only stressful but might also explain why we have such problems with privacy, disruption and acoustics in many modern work settings.

The upshot is that supposedly collaborative working environments based on throwing everybody together are not always conducive for particular tasks, but favour certain types of people more than others.

In part, the solution can be a variety of spaces and an awareness that organisations should not be based on the needs of the extroverts who make the most noise. This model of the workplace based on task-oriented zones is not new and dates back at least to the time of the combi-office, a mixture of cellular and open plan, that was a common feature of European offices long before we even knew what a smartphone was.

This sophisticated model of the workplace is reliant on a thorough understanding of the organisation’s needs as well as those of the people who work for it. This understanding starts from the basic premise that while there may be a good economic argument for reduced space and an admission that some privacy must be sacrificed in the interests of communications, there is a tug back in the other direction that has its own logic and its own business case.

The challenge is, and always has been, to make informed decisions based on the variety of office design models and workplace cultures we can now apply to get the balance right. Most importantly we mustn’t lose sight of the fact that we are designing for animals who may respond to their surroundings in response to their hardwired characteristics.

This first appeared on the What’s Up blog of Sedus

Commercial real estate enters downturn in UK, claims RICS It should be much easier to identify genuinely green products