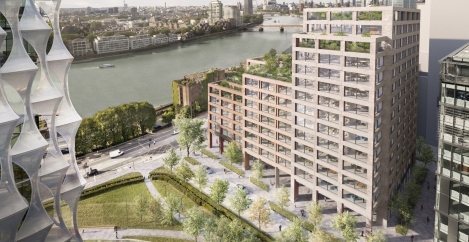 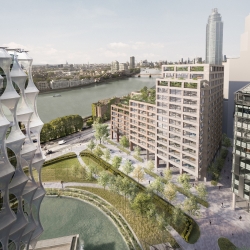 Planning permission has been granted for a new 13-storey riverside office building at the Embassy Gardens development on London’s South Bank. Named EG:HQ, the development will provide 217,000 sq. ft. of flexible space in zone 1 Nine Elms, in addition to 18,000 sq. ft. of outdoor amenity space which will include a 9,000 sq. ft. communal terrace and several private open-air terraces.

The office building will also comprise over 5,000 sq. ft. of ground floor retail and restaurant space, alongside 330 cycle spaces and a cycle workshop to encourage sustainable travel to the new commercial area. Designed by architects Morris+Company, the building’s layout sets out to  maximise large open floor space, fulfilling  what the developer claims is the growing desire for adaptable, flexible office space in central London. EG:HQ will also be equipped with six terraces with views over the River Thames.

Planning permission for the office is part of a wider development at Embassy Gardens, a residential and business development in the Nine Elms regeneration zone in London, England, surrounding the United States Embassy building opened in 2017. On 16 February 2012, Wandsworth Council gave planning approval Ballymore Group’s plans for the 15-acre development. Embassy Gardens was intended to provide “up to 1,982 new homes alongside shops, cafes, bars, restaurants, business space, a 100 bed hotel, a health centre, children’s playgrounds and sports pitches”.

Set to complete in 2022, the building’s future tenants will count publishers Penguin Random House and DK as neighbours, both of which will move into One Embassy Gardens in 2020. They will also be a stone’s throw away from the new US Embassy, and will join Apple and the ‘New’ New Covent Garden Market.

EG:HQ will also aim to capitalise on the lifestyle appeal of the area, which has recently benefitted from a huge influx of shops, cafes, bars and restaurants including the newly-launched Darby’s restaurant by chef Robin Gill and The Alchemist which will open later in 2019, joining (among others) Linnaean, District Coffee and Waitrose and many more commercial tenants set to relocate to Embassy Gardens in 2020.

The London Travel Zone One office will be a 10-minute walk from Vauxhall National Rail and tube (Victoria Line) stations, with the highly-anticipated Northern Line extension which will see two new stations open at Nine Elms and nearby Battersea Power Station, due to open in 2021, dramatically reducing commuter time for those travelling from central London and further afield. A proposed new footbridge will further boost connectivity to the transforming area along with two new passenger piers.

The development is also ideally situated to benefit from international business due to its proximity to the local heliport which is just 6 minutes flight from Biggin Hill Airport. In addition, Gatwick, Heathrow and London City airports are all under 35 minutes away, further cementing Embassy Gardens’ reputation as a global commercial hub.

Seeing red about the only home we will ever know Knight Frank and Work.Life launch flexible office platform