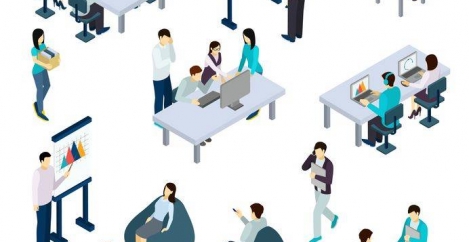 Proportion of flexible space within corporate portfolios to increase dramatically 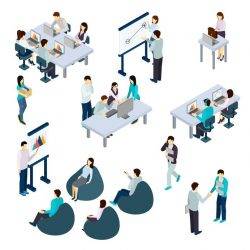 Despite the proliferation of coworking and serviced office operators the majority of global corporates still occupy office space on a traditional lease model, with two thirds of companies in a survey by Knight Frank reporting that co-working, serviced and flexible office space comprise 5 percent or less of their current office space. Knight Frank’s Your Space report, which surveys senior executives at 120 global companies which collectively employ in excess of 3.5 million people worldwide and occupy an estimated 233 million sq ft of office space, found that just a small minority, less than 7 percent, said that flexible workspace exceeds a fifth of their total workspace. However demand for flexible workspace is set to accelerate, with over two thirds of global corporates planning to increase their use of flexible coworking and collaborative space over the next three years.  According to the report global corporates intend to operate increasingly from flexible, serviced and coworking spaces, to create a more collaborative working environment and offer the freedom to expand and contract quickly according to market conditions.

Dr Lee Elliott, Global Head of Occupier Research at Knight Frank said: “This research underlines that a decade of global economic uncertainty has reshaped how many of the world’s largest companies view workspace. Shorter business planning horizons, together with the emergence of new, more agile corporate structures has driven demand for flexible space which enables companies to react to change quickly.

“While co-working and serviced office operators have grown rapidly over the past five years, driven largely by start-ups and the freelance economy, this is only the tip of the iceberg with latent demand from global companies set to emerge over the next three years.”

Over two thirds, 69 percent, of global corporates plan to increase their utilisation of co-working spaces, and 80 percent expect to grow the amount of collaborative space they use over the next three years. Almost half, 44 percent, stated that flexible space will constitute up to a fifth of all office space in the next three years. An additional 16 percent estimated that as much as half of their workspace globally would be flexible space within the same time period.

Over half of companies (55 percent) identified increased  flexibility as the main driver of this change, with a significant proportion (11 percent) stating that the sense of community fostered among workers was the key benefit. A further 11 percent stated that the greater speed to becoming operational was the primary reason for selecting coworking or serviced office space ahead of more conventional office space.

The overwhelming majority of respondents, 75 percent, stated that personal productivity linked to wellbeing and happiness, would increase as they shift towards a new flexible and collaborative model of occupancy that is more in keeping with today’s business structures and working styles.

William Beardmore-Gray, Global Head of Occupier Services and Commercial Agency at Knight Frank said: “The demand for flexibility is the single biggest threat – and opportunity – to owners of office space. The recent boom in co-working is indicative of a structural change within commercial real estate whereby companies desire space that is flexible, highly serviced and aligned within the realities of doing business in an age of disruption. Some co-working operators have capitalised on this already, but it is imperative that owners and developers react to the new reality where customer is king.”