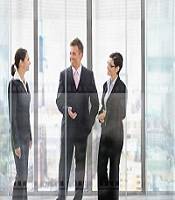 There has been a positive change in employees’ levels of engagement according to new research from recruiter hyphen. Nearly three fifths (58.6 per cent) of UK workers are proud to work for their current organisation, and over three quarters (76.1 per cent) believe their manager gives them the support and autonomy needed to aide their performance. Zain Wadee, managing director at hyphen, said: “Engaging workers is now becoming an integral part of employment and retention strategies; not least to ensure workers are happy but also to help them perform to the best of their ability.”

“Internal communications has a major part to play in any organisation and is a tool that, when used effectively, can encourage debate, share best practise and integrate all levels of a company,” says Wadee. “Good management can also have a significant impact on workplace pride with a balance of autonomy and direction from strong leadership feeding down positively to employees.

“With large organisations recently marking a change in their corporate culture, it is becoming ever more apparent that employee engagement is a growing priority for organisations’ future success.”

Pride in the workplace, at the start of this year, has been felt most amongst women and those aged 25-34, with nearly two thirds (60 per cent) of women feeling proud to work in their organisation compared to 48.5 per cent in September 2012 and more than 7 out of 10 (70.9 per cent) workers aged 25-34 feeling a sense of pride, up significantly from 46.8 per cent towards the end of last year.

However, warns the report, if this level is to be maintained throughout 2013 it will become even more important for organisations to demonstrate positive change towards employee engagement; ensuring employees feel a sense of progression, attachment and commitment to their role.