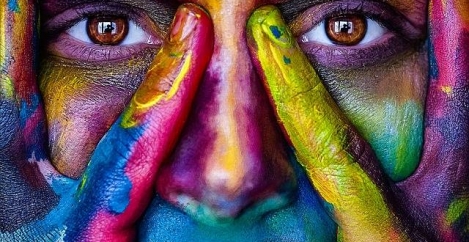 The contribution of personality to the performance of agile workers 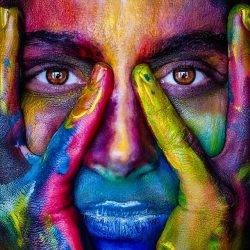 The introduction of agile working into organisations has typically focussed on the workstyles of different job roles, but has tended to treat the jobholders within these groups in the same way. The successful introduction of new ways of working clearly relies on the willingness of the people occupying the job roles to embrace new ways of working; yet there has been little investigation of the needs of agile workers with different personality types beyond looking at the needs of extroverts and introverts. These studies have tended to focus on the workplace; for example, the Cushman Wakefield Workplace Programme briefing paper examines how organisations can accommodate the needs of extroverts and introverts working together in the workplace. However, using OCEAN personality profiles, Nigel Oseland found that different personality types have different preferences, which in turn are likely to affect their performance at work.

This new research looked at the links between agile working, personality and performance to see if different people are more suited to different ways of working and if organisations should use different approaches to agile working employees to increase their productivity. The research, undertaken by JEC Professional Services, was commissioned by the Employers Network for Equality and Inclusion (enei), with sponsorship from DWF and Santander,

The research looked at four main personality types and found differences, as well as commonalities, in both their performance and their attitude to agile working. Those with an Influential personality profile appeared to have the most challenges, particularly with team working, although this is also an issue across a number of personality types. While all participants valued reliable technology there was little interest in more sophisticated technology tools and only a small proportion rated a good workplace as very important. In general there were no significant differences between respondents based on age, gender, job role, length in job role or employment status.

584 employees and managers from Birmingham City Council, DWF (a major business law firm), Santander, the?Department for Work and Pensions, the Ministry of Justice and the NHS chose to participate in the survey. All had some autonomy in where, when, and how they chose to work. Each participant was asked to:

A literature search was undertaken of published papers on ways of working and personality and performance.

Figure 1 shows how different workstyles were assigned to ways of working categories. 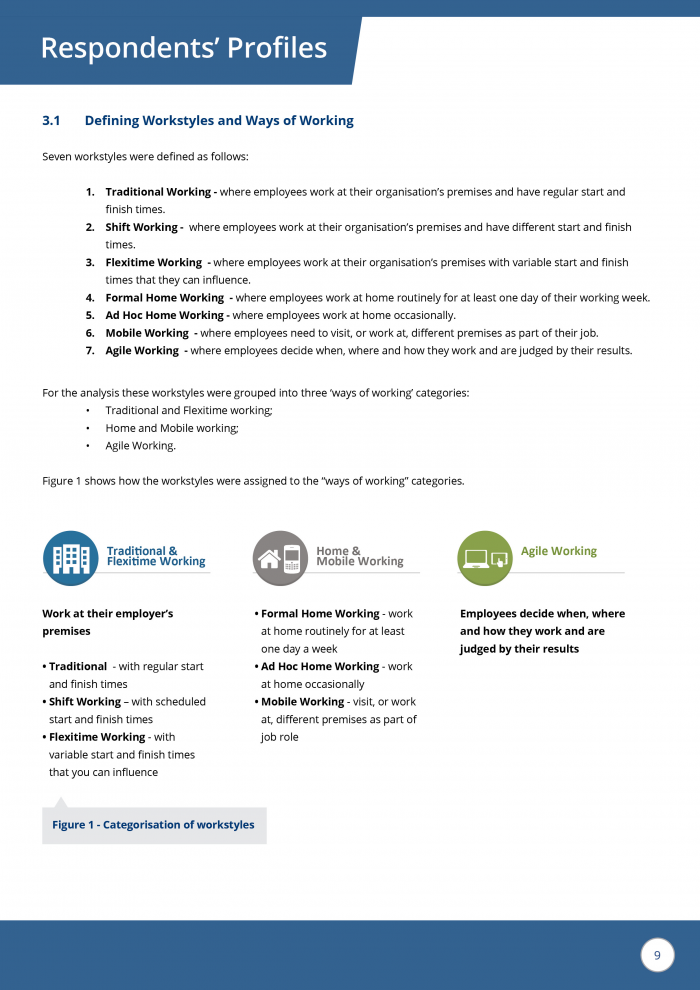 Figure 1 – Assignment of workstyles to ways of working categories

To provide the personality assessments we used the DiSC® profiling technique, which takes its name from the initials of its four main factors:

DiSC is a well-proven test used by some 41 million people across 50 countries since 1984. By looking at the relationships between different factors, it is possible to build up a library of individual traits that a person possesses and also assess traits that a person lacks. Employees with a high score on each of the DiSC personality traits can be summarised as follows (the proportions in the sample are shown in brackets they add up to more than 100 percent because an individual can score high on several different traits): 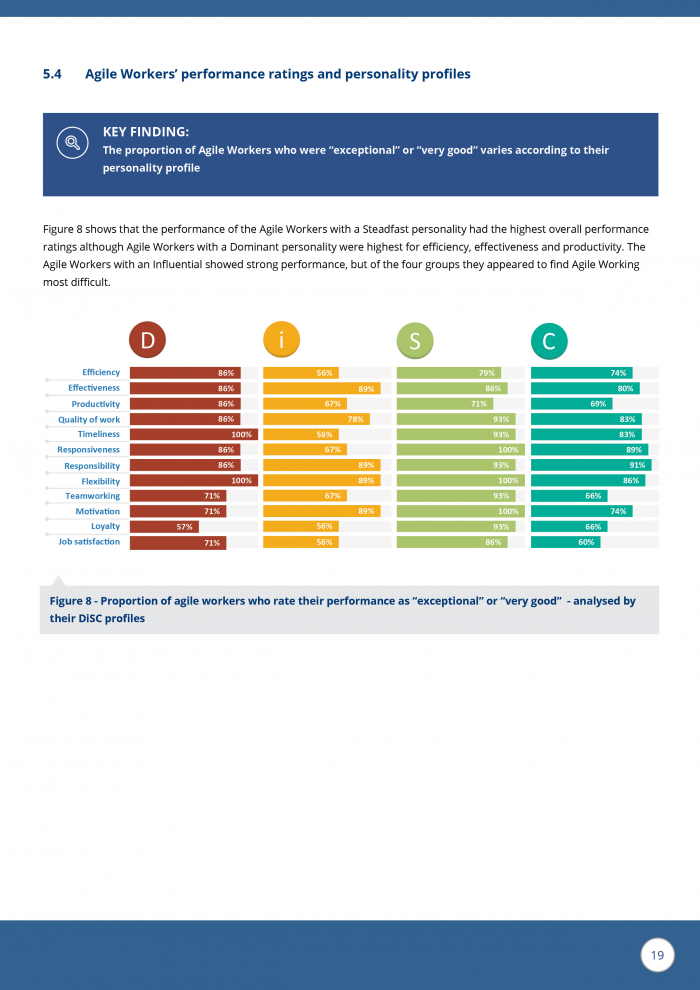 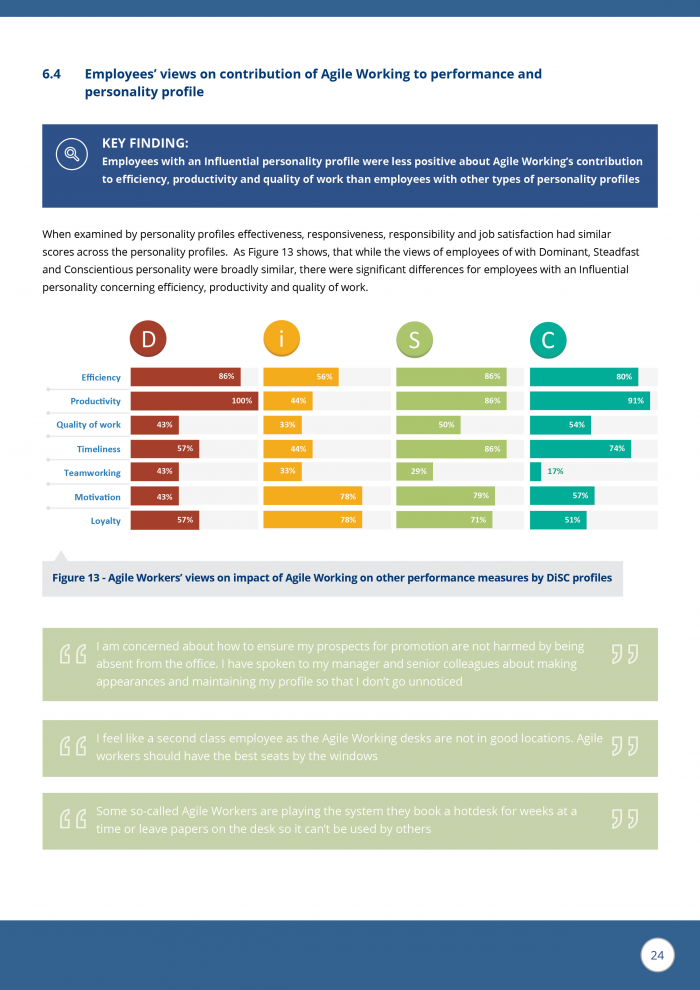 Factors rated as “very important” for achieving good performance by Agile workers across all personality types were communications, teleconferencing, smartphones, laptops, good remote access to systems and files, and fast reliable networks. There were a number of other factors where the ratings varied according to personality type as shown in Figure 4. Good workplace facilities were rated “very important” by less than 40 percent of respondents and particularly low by those employees with a Dominant personality; possibly reflecting the amount of work that now takes place away from an office. A study by Julian Thompson and Prof. Edward Truch suggests that the most direct benefit from flexible working comes from a perceived improvement in personal productivity. They attribute this to a less distracting, more conductive work environment away from an office environment. 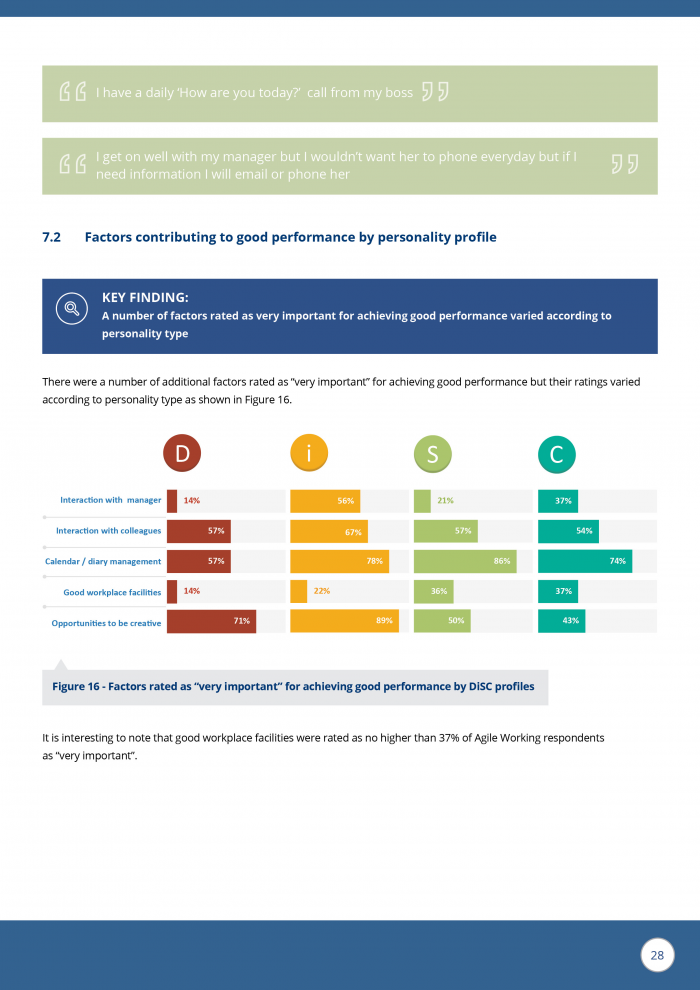 Perhaps most surprising were the factors rated as “not important” for achieving good performance with just some variations according to personality type as shown in Figure 5. Although teleconferencing was rated as “very important” by 51 percent across all types, more sophisticated technologies’ involving screen sharing and videoconferencing were deemed as “not important” by all groups, with the exception of employees with an Influential personality, who perhaps value the additional communications facilities that these technologies afford.

Nigel Oseland points out that 55 percent of communication is non-verbal, 38 percent done by tone of voice, and only 7 percent related to the words and content, clearly non-verbal communication is a key component of interaction. He argues that virtual collaboration systems therefore need to replicate this basic communication need, especially in the early stages of team forming or when the team consists of a high proportion of extroverts. Social communications, both physical (social events) and electronic (social media) were not valued by most employees although more so, not unexpectedly, by those with an Influential personality. 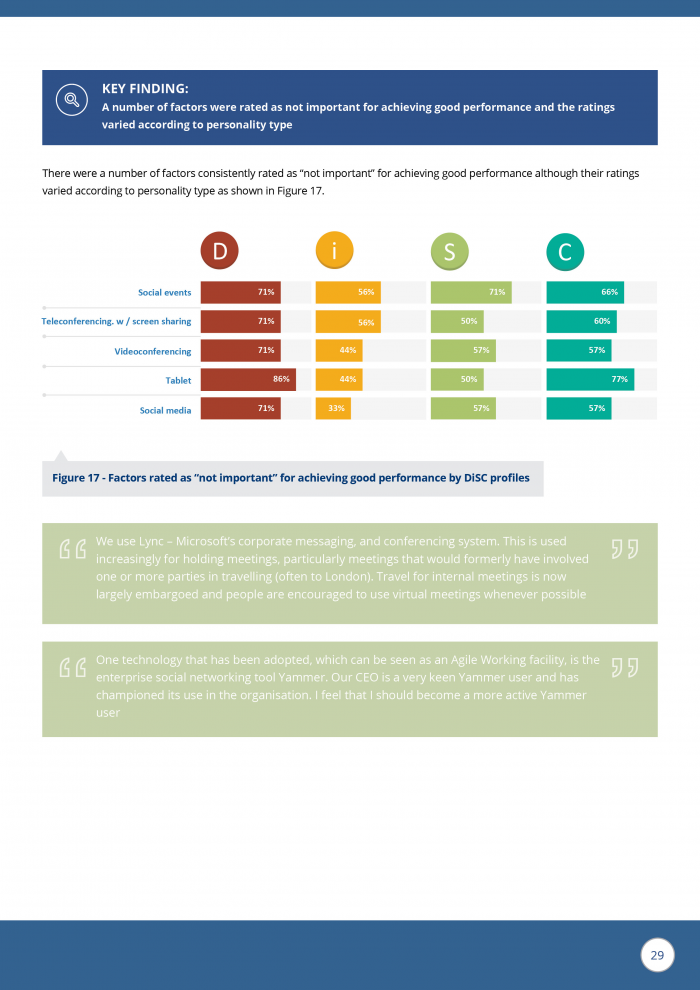 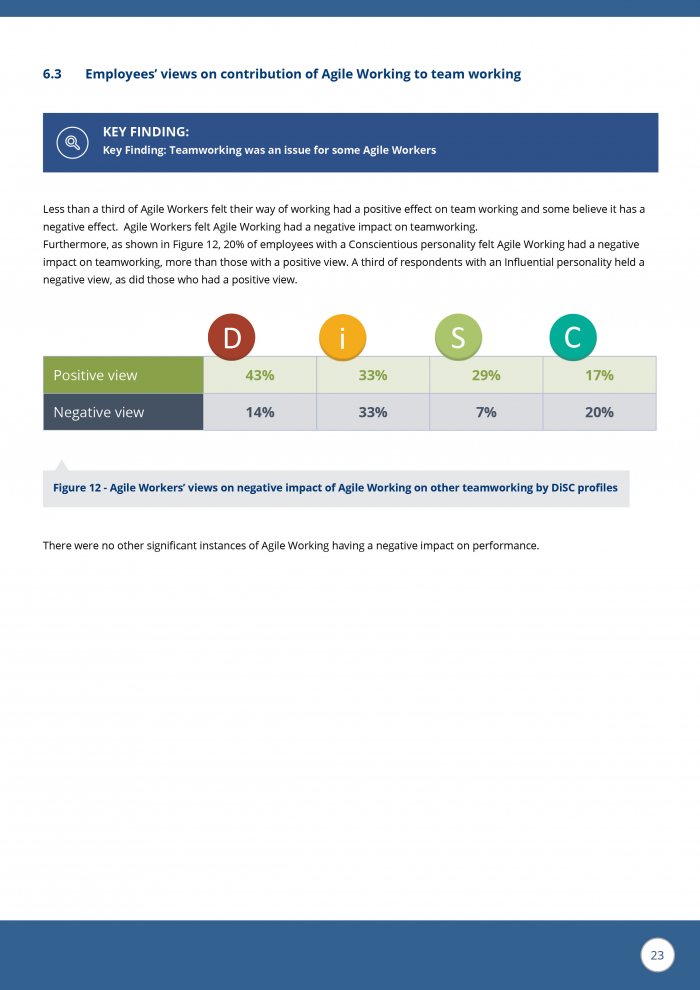 This research indicates that it is important to consider the needs of the different personality types of employees when making the transition to an Agile Working environment. The DiSC profiles analysis provides guidance on how these employees should be managed.

The survey has also indicated the need for organisations to address issues in teamworking in their implementation of agile working. Team working is clearly an important factor in performance but is difficult to get right. From the survey responses it appears that the implementation of Agile Working in a number of the participating organisations has not effectively addressed teamworking. Furthermore the survey suggests that social events and social media, or the way they were being used, were not regarded as relevant by the survey respondents.

Cushman Wakefield argues that, if organisations want to change how teams/departments gain synergy in collaboration, they must recognise the differing communication preferences in the workplace and provide an environment that meets employees’ needs and also provides a support platform for collaboration.

In summary, employers need to compensate for the reduction in face-to-face contact time which results from the adoption of agile working with effective communications, new team protocols and the appropriate use of conferencing technologies.

This feature was originally published in Work&Place Journal

John Eary is a Director of JEC Professional Services, a consultancy with a strong track record in providing advice and support on Agile Working and exploiting IT effectively. John has assisted over 30 organisations adopt new ways of working. John is a regular blogger on agile working and seeks to provoke thinking on the opportunities and challenges for new ways of working presented by technology. John regards himself as a true agile worker practising work-life integration.

Mergers and acquisitions often fail because workers struggle to integrate into the new organisation Fear of change is putting British companies at risk, Microsoft report claims