The rehabilitation of the cubicle and other lessons from 100% Design 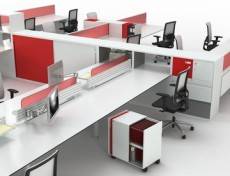 As we’ve said before, acoustics has become the dominant theme at office design exhibitions over the past three or four years. That’s been true at shows in Milan, Cologne, Chicago and London and was certainly the case at this year’s 100% Design at Earl’s Court. A quick whizz around the office zone at this year’s event – which is a useful way of getting an impression before you stop to talk to people about the detail of what they’re doing – revealed that well over half of the exhibitors were showcasing products that addressed the issue of acoustics. And yet things have also moved on from recent events, not least in the rehabilitation of that most demonised of all office furniture pieces – the cubicle.

Of course, the related issue of acoustics and personal privacy have always been with us. Yet their importance appeared to lapse in recent years as we accepted that the open plan was the way to go to encourage collaboration, the exchange of ideas and, of course, cutting costs. This all went hand in hand with the domination – of the UK market at least – by bench desking. This was all bad news for desking manufacturers who had once sold heavily engineered L-shaped workstations full of tooled-up metal to provide structure, vast cable management spaces and sliding tops.

The results were apocalyptic as manufacturers adjusted from selling workstations for £1,000 and up to benches for about a tenth of that. The problem of privacy didn’t go away however and the solution was shifted to what we now refer to as ‘third space’ – breakout areas, bookable cells and more recently acoustic pods.

There were plenty of these third space products on show at 100% Design this week, but there were also more signs of a shift back to providing acoustic and visual privacy at the first space – the desk. This was very evident in the display from KI, a US owned company, the spiritual home of the cubicle and a country still not quite as familiar with a long-established open plan hegemony as we are in Western Europe.

Yet their new integrated system UniteSE, while looking unmistakeably like an old school North American modular panel system is in fact designed by London based Welsh designer Craig Jones, is manufactured in Yorkshire and Essex and works in very contemporary ways to address the UK market. This includes the integration of third spaces into a modular layout and a screen system specifically designed to provide acoustic and visual privacy. The upshot is unmistakeably a cubicle, albeit one that could only work now. 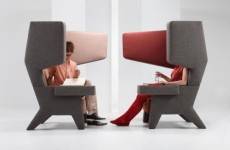 The same thinking was also evident in the presentation by Icon of their new screen range, System 06, which can function as a freestanding screen but is also presented as an unashamedly modern response to the growing demand from customers to create cubicles.

The issue was raised at both sessions hosted by Insight during the show. Although ostensibly on different topics – flexible working and acoustic design – the idea that we might see a return to some old principles was discussed by speakers including Ben Munn of Regus, Monica Parker of Morgan Lovell, Tim Oldman of Leesman and Andrew Mawson of AWA. All felt that we should be wary of having preconceptions about what works best in a particular situation and that we now have the choice of working in ways and with products that best suit what is needed by each organisation. There is no paradigm or model or one best solution, just more choice about how we design and manage workplaces. The real trick is working what will work best in any given situation.

Many of the third space products on show were covered in our preview of the show but some interesting additions we saw at 100% Design included breakout chairs from a company called Prooff which took the idea of having a winged headrest as an acoustic baffle to its extreme and Nomique  who showcased a range of sofas with acoustic panels.