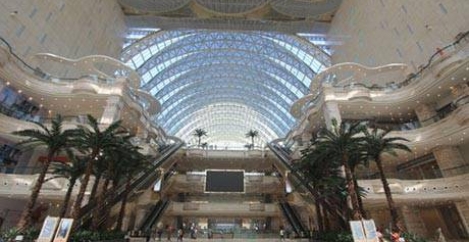 Dubai will be kicking itself at the news that the world’s largest building, or rather world’s largest standalone man-made structure, has opened in China. The New Century Globe Centre in Sichuan province is a mixed use development housing offices, leisure facilities, hotels, shops, restaurants and even a beach resort warmed by an artificial sun. The 18-storey, glass and steel frame structure, is situated above a new metro station in Chengdu, stands 100 metres high, is 500 metres long and 400 metres wide giving it a floor space of 1.7m sq. m.  making it the world’s largest standalone building, beating the previous record holder Terminal 3 at Dubai International Airport by around 50,000 sq. m. and, as measured according to internationally recognised lazy media shorthand analogies, able to house 20 Sydney Opera Houses.

The building contains all the usual signs of a modern  mixed use development including a vast shopping mall, 14-screen Imax cinema, an Olympic-sized ice rink, two five-star hotels and 720,000 sq. m.  of offices.  Unlike many however it is also home to a facsimile of an entire Mediterranean village and a 400m artificial beach in the Paradise Island Oceanic Park, with a sea breeze, an artificial sun projected onto the world’s largest LED screen and a sunburnt couple from Swindon called Phil and Lisa who promise to stay in touch but won’t.

The structure has only been under construction since the Spring of 2012 and has been open since July 1 of this year.