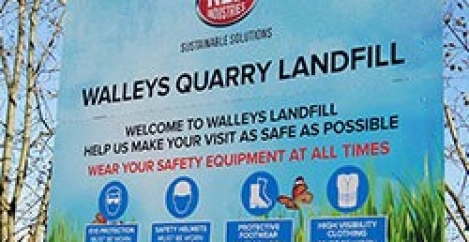 We need to talk about Red Industries 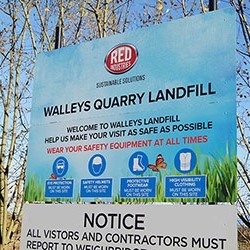 First up, a disclaimer. I am a native of the town. Fairly recently, I returned to live there after many years away. Most importantly in the context of what I am about to write, my mum was laid to rest in the town. Her grave lies in the main cemetery of the village of Silverdale.

Silverdale has a population of a little under 5,000 people. The Borough of Newcastle-under-Lyme is largely formed from a number of similar villages and has a total population of about 130,000.

Yet this small village in this small town is the source of more complaints to the UK’s Environment Agency than any other location in the country. Last weekend alone the council received around 2,000. Many hundreds more were made to the EA (exact numbers are vague although the EA admits it was a record number). Those complaints include one of my own. All referred to the polluting stench of sulphurous rot emanating from the landfill site in the village, owned by Red Industries.

Call the EA reporting hotline and the first question you are asked before saying anything else is whether the complaint is about Walley’s Quarry. That tells its own story.

Among the complainants were local schools, Keele University and the local hospital. To put this into context, the hospital is 2.5 miles away from the landfill and the stench was reported inside the building. My own home is around 2 miles away and my complaint about Red Industries and its hell hole was made from there.

My mother’s grave lies 100 yards from the entrance to the site. I now cannot visit her without heaving.

God alone knows how awful it must be for mourners at funerals. And how much worse for those who live nearby. Although you can get some idea from the activist Facebook Group set up to tell their stories. Those stories have amped up since the site was granted a new licence last year. That doesn’t seem a coincidence.

I could say the Environment Agency is pussy footing around the issue, but they are not even doing that. Last weekend’s deluge of complaints to the agency coincided with the introduction of new monitoring equipment at the site. On Monday it became apparent that this equipment wasn’t even turned on.

And so, the suggestion from MP Aaron Bell that the weekend should be considered an incident in its own right can be dismissed by the very people supposedly responsible for protecting the environment. I don’t know what they make of his raising the issue in Parliament.

I was pleased to hear the Government will not be imposing a congestion charging solution to the nitrogen dioxide exceedances on Basford Bank.

Cllr @SimonTagg and I will be visiting Walley's Quarry today. pic.twitter.com/3emovxA33S

And the response of Red Industries to what is happening? It is to hide behind regulations and the skirt tails of the useless EA, refuse to acknowledge the problem and write intimidating letters to the MP.

A new motion put forward to the council suggests that the site needs to close while a better plan is formulated. The leader of the council has called on the local head of the EA to resign and for the site to be closed permanently. His organisation is now actively at loggerheads with the EA. This is getting very real, very quickly.

@EnvAgencyMids The Council received more than 2,000 complaints about the odour at the weekend. We had officers out on the ground monitoring the situation and evidencing residents’ complaints until well past midnight on Saturday. We have colleagues living across the borough ? pic.twitter.com/23UEiA70Su

Something needs to change and soon. The site as managed by Red Industries is – at the very least – worsening the daily lives and wellbeing of tens of thousands of people. It may well be affecting their physical health. These people are being let down by the Environment Agency which needs to be far more proactive and possibly aggressive in its dealings with Red Industries. Already there have been minor protests, including one man chaining himself to the gates of the site. But if local people cannot rely on the agencies that should be protecting them, we might expect those protests to ramp up.

This is a personal post, but it’s very important to me. It will stay online but not appear on the homepage.