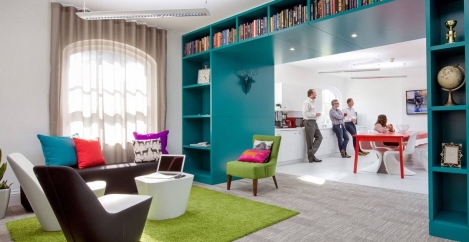 Well designed offices should create spaces suitable for everybody 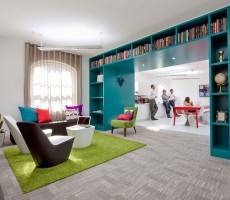 The basis of the commonly held belief that offices are designed for extroverts seems to be that, because the primary goal of offices is to bring people together to work and because the de facto office design standard is open plan, then this makes them an ideal home for extroverts. They are parties to which everybody is invited, but at which the wallflowers are told to dance. There is something in this but it doesn’t tell the whole story. This is just as well because personalities are not so straightforwardly easy to categorise and the needs of everybody to collaborate or work alone – however extroverted they might be – vary throughout the day. The office remains endlessly complex and sophisticated and any simplistic notions about it and the things it does should be challenged with a cold, hard look at the facts and what is happening in the real world.

A lot of commentary about open plan these days seems to suggest that it is not merely the only option for employers but also the only option for employees. With the possible exception of call centres, this is increasingly likely to be untrue and the very best modern designs tend to use the open plan as part of an office layout that offers people choices of where and how to work, alongside a range of other work settings including meeting rooms, breakout space, private work areas and cafes. 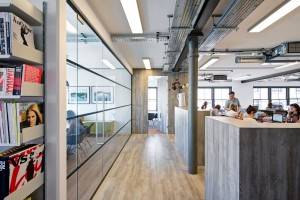 In providing these dynamic environments, designers are drawing on the inspiration of a variety of other settings where work takes place including homes, hotels, cafes, bars, rail stations, air terminals, parks and even city streets. Just as work has shifted out of offices and into the public realm, so too have the forms and functions of the public realm worked themselves back into the office.

That is just one reason why the old demarcations between physical environments and office furniture have eroded, something that was very much apparent in the designs showcased in Clerkenwell. The early pioneers of remote working used to concern themselves about how to convince employees to have a desk and task chair to work from at home. What they didn’t foresee was quite the extent to which we would adopt domestic and public forms back in the workplace.

Offices are not just about collaborative work

It is still pretty common to hear people suggest that offices exist to bring people together, but according to a 2013 study of some 90,000 people by architects Gensler, ‘the most significant factor in workplace effectiveness is not collaboration, it is individual focus work.’ Conversely, the report also claims that ‘focus is also the workplace environment’s least effectively supported activity.’ 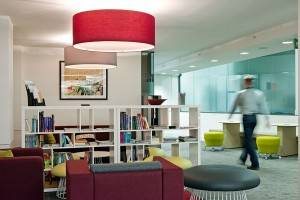 This kind of finding tends to lead people to conclude that we need to do away with the open plan, but that forgets that there are some things the open plan is very good at and that some people like and need to work in teams.

The challenge is once more to provide choice and balance. The provision of settings for private and interactive work starts from the fundamental premise that while there may be a good economic argument for the open plan and an admission that some privacy must be sacrificed in the interests of communications, there is a tug back in the other direction that has its own logic and its own business case.

These developments are also manifested in the designs of individual products especially those that address acoustic and visual privacy. Similarly there is an ongoing fascination with how to make the public spaces in buildings work better. At Clerkenwell Design Week there was lots of talk of soft seating and quiet time, as well as more traditional public spaces such as receptions and break out spaces. Again this is linked to the increasingly peripatetic and diverse nature of the workforce and the need to accommodate people physically in a building as well as giving them space to work quickly and easily and in the way that suits them as individuals. In doing so, we can expect a move away from the simplistic notion that collaboration makes people more productive and the best way to achieve that is to expose them to each other in an open plan office. That all depends.

The ever changing needs of the individual

Inherent in the idea of giving people more choice over where and how they work and with whom, is the ability to meet the needs of a wide range of people. This is not just important for extroverts and introverts, but also people of different age groups and to provide an inclusive environment for those with disabilities.

It’s also important to note that the needs of these people are not fixed. Even extroverts need some time alone to get certain things done or to simply get away from other people. Nor should we assume that a millennial worker has different needs and a different way of working to somebody in their sixties.  The important thing is not to constrain work based on arbitrary notions of identity and personality and not to make assumptions about people, but instead create a working environment that is inherently flexible enough to meet the needs of everybody.