What Søren Kierkegaard can teach us about workplace design and management 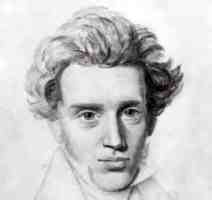 Søren Kierkegaard was a Nineteenth Century Danish philosopher and proto-existentialist. Not for him the hazy, romantic ideals of many of his contemporaries. He was one of the thinkers who gave birth to the Twentieth Century with its focus on the individual, reality and life in a sometimes uncaring world, although he was no atheist like many of the true existentialists. If he’s generally well known for anything these days it is for a single quotation that reads like a greeting card aphorism but is no less true for that. He said: ‘Life can only be understood backwards; but it must be lived forwards.’ Looking back can give you a real handle on the present. I moved offices recently and as these things happen, a number of books that I routinely ignore fell open while I was looking for some displacement activity.

One was a book called New Workspace New Culture by Jeremy Myerson and Gavin Turner. In it, the authors argue that the changing nature of work demands a new response from the people who design and manage workplaces. It talks about the changing role of the office, flexible working models, the impact of a new generation of staff, pervasive technologies, inter-disciplinary work, the feminisation of interiors and office designs based on social spaces rather than workspaces.

Much of it could have been presented in a book about new models of workplace design today, but it was actually written in 1998. In many ways, the most dated things about it are the names of the companies cited as case studies, most of them now faded or defunct. A passage such as this could have been written anytime in the past 15 years, or past 15 hours:

“The designed office environment  can in a general way raise or depress morale, and can in some more specific ways  have a major impact on how well the organisation functions. This is not simply a question of decor or facilities but is much more about what has been described as organisational ecology – the symbiotic relationship between the social organism of the organisation and the internal structure of the environment within which it breathes and mutates.”

Contrast this with the recent article in the Wall Street Journal announcing that cubicles in the office are now seen as dated, a headline which would have seemed tired in 1998, and you perceive either a genuine slip in time or the realisation that there is no evolution in office design towards a broadly accepted endpoint. Rather there is a range of approaches and models that can be applied to the workplace. That range has extended over time and there is a generalised shift along the continuum it creates but there is no single solution, just doing the wrong things in the wrong place and time. There isn’t even anything wrong with cubicles.