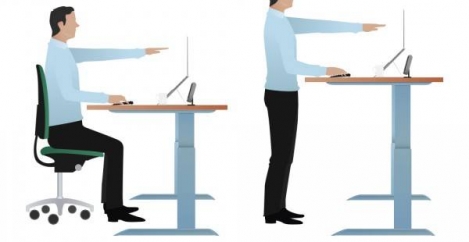 Workers should spend half of each day working while standing, claims report 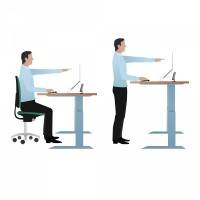 A new study published yesterday in the British Journal of Sports Medicine claims that office workers spend far too much time sitting, are suffering from a range of conditions and illnesses as a result and so should be encouraged to spend up to half of each working while standing. The report, The sedentary office: a growing case for change towards better health and productivity, was commissioned by Public Health England and claims that our present sedentary working lives can lead directly to conditions such as heart disease, diabetes and cancer. Mirroring the findings of other studies, the report also claims that we cannot fully mitigate these effects with exercise outside of work and need to address our working habits each day instead. The report argues that there is a “strong case” for changing the designs of offices and workstations, for example, by offering standing desks.

The report estimates that currently between two thirds and three quarter of an average office based employee’s working hours are spent in chairs, more than half of which is made up of “prolonged periods of sustained sitting”. It argues that this should be addressed by encouraging more working while standing.

While conceding that the report’s findings are based on retrospective studies and observation which make it difficult to establish causal links, Thomas Yates, one of the paper’s authors, said in an interview with The Times: “Unlike purposeful exercise, standing is something that the vast majority of individuals can still do without too much effort and it does not detract from time at work.”

Editor’s note: It’s worth pointing out that this study was co-commissioned by Active Working which is named in the report as a Community Interest Company – a form of social enterprise – but which is a front organisation for an office furniture reseller.