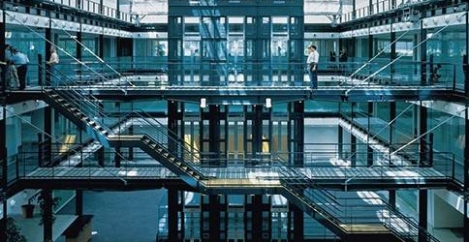 Agile working? This is Frank’s World and the rest of us just live in it 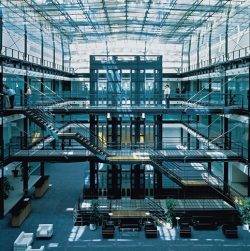 James Joyce had a word for moments of insight when we see right through convention and suddenly appreciate how things really are. He called such moments epiphanies. Such a flash of insight happened to me three or four years ago in Texas. I had been explaining to the partners of a very large international client how they could use their office space more effectively. Since these partners were rightly concerned with driving down occupancy costs, including rent, property taxes, service charges and energy costs throughout all their operations everywhere, my proposals were very acceptable.

Immediately after this minor consultancy triumph – how nice to be able to make a universally popular, cost saving proposal, I glanced out of the window of the presentation room and saw before me the whole of downtown Dallas, glistening under the pale, dusty blue November sky.

Four unpalatable truths came to mind. First, half the shiny office buildings I was looking at were less than ten years old; second half were half-empty because of enthusiastic over-building; third, I had just been explaining how, quite practicably, my clients could reduce the amount of office space that they would normally have expected to use by one third or even half; and finally I was almost certain that about half of the partners I had been speaking to had some portion of their pensions invested in funds that owned such buildings as the ones I was staring at.

Suddenly real estate didn’t seem so real anymore. I realised just how rapidly ways of working were changing and how radically these changes would affect the conventions upon which office design and real estate practice have been based for decades.

… I didn’t write any of that. It’s the opening section of a book published over twenty years ago called The New Office by Frank Duffy, then chairman of architectural practice DEGW. If it sounds like it could have actually been written yesterday, then that just shows not only how prescient it was but how current it was then and remains now. Indeed, many of the core ideas that are now accepted as part of the contemporary narrative about agile working, progressive workplace design and management were crystallised during the 1990s by Duffy, his colleagues at DEGW and several contemporaries, including the other great Frank from that era, Professor Franklin Becker of Cornell University.

A new way of talking

They did more than develop ideas however. They evolved and popularised the vocabulary that we still use today when we talk about offices and work culture. The echoes of their voices are there in pretty much every piece of writing on the workplace, even though their authors are often unaware of the fact. This applies even to ideas that have been overtaken by events. The language of hot desking and teleworking may have dated, but people still use them, often referring to them as revolutionary, when they are not. Duffy and his contemporaries may not have used terms like agile working but they described the idea.

Other ideas have aged better. Describing the office as a hive or a club? The non-territorial office? Integrated workplace strategy? The cafeteria model of space? The office ecosystem? Engineered serendipity? Agile working? The temporal layers of the building? Collaborative space? All forged in the white heat of the technological revolution of the 1990s.

Standing on the shoulders of giants

So, we are all standing on the shoulders of these giants, just as they stood on those of others, even if we don’t always know it. This thought comes to mind when I read articles such as a piece in the New York Times, which states: “new office designs are coming to a workplace near you, with layouts meant to cater to the variety of tasks required of modern white-collar workers. Put another way, it means people don’t sit in just one place.”

This kind of thing is nearly always welcome as a way to get people to think about how they work, even if it does rely on some tired and misguided demonising of the open plan office, but it’s nothing new. Without unduly singling out the author of this piece and his editor because it happens all the time, they are completely ignoring over a quarter of a century of history which shaped our current conversations about wellbeing, agile working, multi-generational design and all the rest. The New York Times article, and others like it, are an atemporal echo from two decades years ago in the case of Duffy’s New Office and even longer in other works.

Like Billy Pilgrim, they are unstuck in time. But at least they knew it.