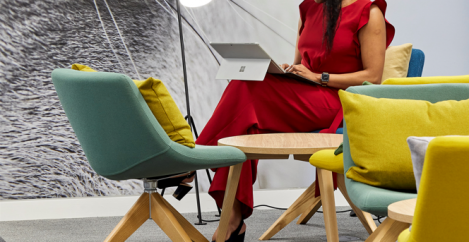 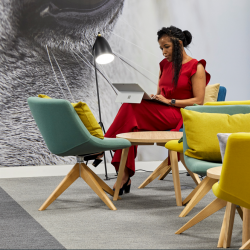 A report by the British Council for Offices (BCO) recommends a new method for calculating the amount of space needed per person in the post-pandemic world of flexible working. The research claims to identify a ‘sweet spot’ of 10-12 sq. m. per person. This will account for the rise in people working from home and hot-desking when in the office, while simultaneously ensuring the workspace meets modern employers’ requirements to promote productivity and wellbeing, as well as targets to minimise carbon emissions.

The BCO members surveyed said that expecting an office to support higher densities requires additional mechanical, electrical and plumbing systems, which increases the carbon embodied in the building as well as energy used while in operation.

The new report, ‘The Future of UK Office Densities’, commissioned by the BCO, says the impact of the pandemic on the office sector combined with energy and carbon reduction targets means the traditional office space metrics – which were based on space-per-desk – are less relevant.

The BCO report recommends a more generous allocation of space, based on space per person rather than desk, to meet employers’ current requirements to promote staff performance and comfort by providing a variety of settings in the workspace. The report shows that at the new recommended ratio of 10-12sq. m. per person, most common workplace issues such as over-crowding and noise pollution are alleviated. In contrast, higher office densities, of less than 8 sq. m. per person, are more likely to cause issues and affect occupant comfort, wellbeing and performance for most organisations.

The BCO report reflects the shift in office use away from single desk use towards a collaborative style of work and an increased demand for amenity and breakout space, trends that it is believed the pandemic and growth of flexible working has accelerated.

Richard Kauntze, Chief Executive of the BCO, said: “The pandemic has prompted many organisations to adopt a greater amount of agile and hybrid working, resulting in suggestions that there will be a dramatic reduction in the amount of office space they require. However, the BCO’s latest research shows that this is partially offset by adoption of a more generous ratio of space-per-person, as employers seek to attract their staff to the office and to support productivity by providing an environment that promotes wellbeing and collaboration.

“Our latest report on office density reflects these changes in working patterns, as well as the need to achieve UK net zero targets for 2050 combined with increased energy costs. This report aims to help office designers, developers and owners, as well as occupiers, to achieve the optimal level of density to support the competing demands being placed on today’s offices.”

UK office densities are among the highest worldwide, and much higher than densities in the majority of Northern Europe. In 2001, the average density in UK offices was approximately 14.8 sq. m. per desk on a typical floor, but by 2018 it was to 9.6 sq. m. per desk.

The BCO report’s new recommendation of 10-12sq. m. per person will now inform future versions of the BCO’s ‘Guide to Specification and Guide to Fit-Out’. The research evidence was gathered from various quantitative and qualitative sources as well as 18 interviews and 202 online survey responses from the BCO membership, and detailed analysis of the Leesman Index database.