The Council on Tall Buildings and Urban Habitats (CTBUH) has announced the winners of its Best Tall Building Worldwide competition. The overall winner was the China Central Television Headquarters in Beijing (above) which was also the regional winner for Asia. The other three regional awards went to The Shard, London (for Europe), The Bow in Calgary (Americas) and the Al Khatem Tower in Abu Dhabi (Middle East and Africa). The awards were presented in Chicago on 7 November with the winners chosen from 60 entries by a judging panel. A popular vote was taken on the evening which also saw the audience voting the CCTV headquarters as the best tall building. The overall winner award was presented to the building’s joint architect Rem Koolhaas, who famously included a chapter called ‘Kill the Skyscraper’ in his 2003 book Content.

Koolhaas referenced the book in his acceptance speech. “When I published my last book, Content, in 2003, one chapter was called ‘Kill the Skyscraper,” he said. “Basically it was an expression of disappointment at the way the skyscraper typology was used and applied. I didn’t think there was a lot of creative life left in skyscrapers. Therefore, I tried to launch a campaign against the skyscraper in its more uninspired form. The fact that I am standing on this stage now, in this position, meant that my declaration of war went completely unnoted, and that my campaign was completely unsuccessful. Being here, it is quite moving – to be part of a community that is trying to make skyscrapers more interesting. I am deeply grateful, and thank all my partners.”

He is not the only prominent architect to have expressed – at one time – a distaste for tall buildings. Earlier this year in an interview in Foreign Policy magazine, Frank Gehry took exception to the towers that spear the skylines of the world’s cities. ‘The worst thing is when you go to places like Dubai,’ he said. ‘They’re on steroids, but they just end up looking like American or European cities with these anonymous skyscrapers – like every cruddy city in the world. One would hope there would be more support from within these places for architecture that responds to the place and culture. That’s what I’m trying to do, but, man, no one else seems to be involved with it. It’s just cheap copies of buildings that have already been built somewhere else.’

A list of all the finalists is available here. 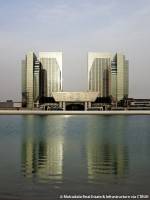