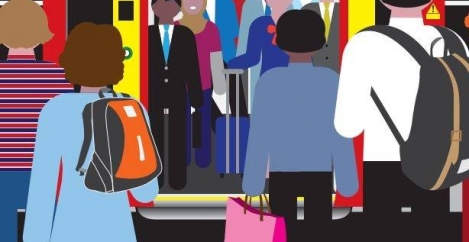 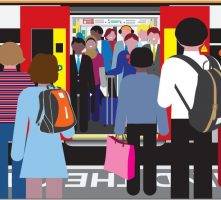 The average UK commuter adds almost 800 calories to their diet every week as a result of their journey to and from work, according to our new report, Health in a Hurry, from the UK’s Royal Society for Public Health. The study of around 1,500 people claims that the average time spent commuting in the UK has increased in recent years to almost an hour a day, and suggests longer commutes are therefore potentially shortening lives. The report highlights the impact of travelling to and from work caused by forms of passive commuting including rail, bus and car. It says that this part of the daily routine has a huge impact on the public’s health and wellbeing with longer commute times associated with increased stress, higher blood pressure and BMI, and reduced time available for health-promoting activities such as cooking, exercising and sleeping. Commuters in London have an average journey of 79 minutes while it is just under 45 minutes for people living in Wales.

Of more than 1,500 commuters polled for the report:

The report includes what it calls a ‘commuter distress-o-meter’ which highlights the top three aspects of commuting which the public believe are most detrimental to their health and wellbeing, which are journey delays, overcrowding and anti-social behaviour

In order to combat many of these issues, the report calls for a concerted effort from employers to increase flexible and home working, easing the strain on the roads and rail network during rush hour. Almost three in five (58 percent) felt flexible working hours would improve their health and wellbeing.

The report also calls for ‘health and wellbeing’ to be an explicit specification when awarding train and bus franchises to curb damage to passenger health. The call comes against the background of an ongoing summer of misery for rail commuters, with the threat of strike action on the East Coast Mainline, a series of strikes in Scotland and industrial disputes for those using Southern Rail services in the South East. The authors suggest that a ‘health and wellbeing’ requirement in franchise agreements would encourage transport providers to make the commuting environment more health-promoting; similarly, we are urging Network Rail to restrict the proliferation of junk food outlets in stations.

Shirley Cramer CBE, Chief Executive of RSPH, said: “For some of us the daily commute can be a pleasurable experience, giving time for reflection or an opportunity to relax; but for an increasing number of us it is having a damaging effect on our health and wellbeing. As the length of our commute increases this impact is getting worse, including by contributing to rising levels of stress, adding to our waistlines, or eating into time we could otherwise spend doing activities which enhance our health and wellbeing such as sleep, exercise or time spent with friends or family.

“Taking public transport should be encouraged and made as attractive as possible, so there needs to be greater consideration given to supporting passenger’s health and wellbeing. A simple step would be to ensure that health and wellbeing is a consideration in the awarding of any transport franchise. This could include dealing with overcrowding which is cited by commuters as one of the main bugbears which impacts on their health and wellbeing. While investment in infrastructure such as longer trains and platforms would yield greater results, a quick win on capacity would be for franchise holders to declassify first class carriages on commuter routes to free up desperately needed space.”

Dr Justin Varney, National Lead for Adult Health and Wellbeing, Public Health England said: “Not only does it add to our stress levels, but travelling by bus, car, and train eats into the time we could be using to incorporate physical activity into our daily routine. Employers can support staff wellbeing by offering facilities which promote cycling and walking to work, such as showers and bike spaces, and taking up opportunities like the Cycle2Work scheme.”

New report sets out four key challenges for the workforce of the future Android users perceived to be nicer people than iPhone users, research suggests