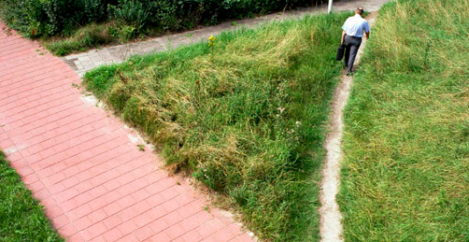 Design what you like, but people may have different ideas 0 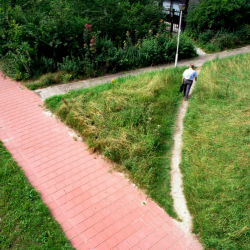 The story goes that, when Rem Koolhaas was appointed to design the McCormick Tribune Campus Center at the Illinois Institute of Technology in 2003, the legendary architect noticed how students had created their own pathways between the buildings as they had made their way around the site. The site of the new building included a field on which their footprints had worn down the grass to such an extent that distinct grooves had been carved out that reflected their movements.

Given that his brief was to create a new building that serves as a central hub for student life and that he had already been offered an organic design blueprint for the way students used the campus, he decided to reflect this in the layout of the new building. The result is an irregular floor plan with diagonal corridors of differing widths linking the parts of the interior in a way that reflects the number of students who use the paths they create.

This tale could be interpreted in a number of ways. About how Koolhaas was able to use his powers of observation to look at a problem in a new way. About how lazy some people are when getting from A to B. About the need to create organic designs that reflect how people move around. But also about how people are likely to subvert the intentions of designers and all of those who think they can influence their behaviour.

The law of unintended consequences seems to be one of those laws from which many people think they might be exempt. Yet barely a day goes by when some seemingly wel-designd and thought-out endeavour, idea or piece of legislation isn’t subjected to the free thinking, preferences, whims, idiosyncrasies and mischievousness of human beings.

We are already in the Westworld era and we need to learn quickly how to live alongside – and control – the beings we create. And we need to do so, as Westworld makes clear, with a clear understanding of our own nature, not just that of the robots. This is an issue that has preoccupied the species’ greatest minds for Millennia so don’t expect it to be resolved soon and certainly not before we make decisions about the beings we create.

One thing we can say is that whatever we come up with, and whatever we design, it’s people that might send it off into some tangential or even completely unexpected direction, even more than the automatons.

This kind of thing is worth bearing in mind whenever you hear anybody suggesting that they understand the links between cause and effect and even before a human being is added to the mix. This is the tiger in the rough; the capricious, unpredictable, limiting factor that makes everything so fascinating  and every idea so nebulous.