Why would you want a Google office when you can create your own? 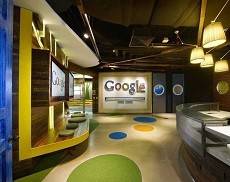 Google has dramatically shaken up the world of the Internet and also changed the face of the traditional office environment forever. Nothing has ever been the same, since the ubiquitous four-colour logo first appeared on the worldwide web. Everything that Google does creates a ripple in the business world. Whether it’s giving employees 20% of their time to focus on their own projects, allowing them to form teams to peruse the idea of their choice or installing slides instead of stairs many are asking “should we also be doing that?” And it’s not surprising. All companies want to be successful and there’s no better success story around than Google. So let’s try and model ourselves on or imitate Google, right? I have lost count of how many times I’ve heard “could we have an office a bit more like Google?”

And I’ve also lost count of how many times I’ve seen abandoned couches, beanbags and dusty PlayStations lying around in cobwebbed rooms, which are only used when there are no other meeting rooms available.

Most companies are not like Google and therefore don’t need a Google-cloned office. The problem is that the Google-office became the template for ‘the great modern office’ of a great modern organisation and now we all want to work in this type of dynamic environment.

“Independent from the drive for efficiency companies ceremonially incorporate institutions into their structure that are believed to be rational.” Professor Daniel McFarland, Stanford University

John W. Meyer, the famous Stanford professor who gave rise to the New Institutionalism – an organisational theory that dominated the field in the second part of the 20th century – would not be surprised. “It’s a matter of legitimacy!” he would say. Companies naturally try to emulate the procedures, rules and practices of the most successful organisations in their field. Especially in the times of uncertainty and ambiguity, we tend to emulate the behaviours of the ‘best in class’, sometimes not looking deeper into the reasons why we want to mimic them. It’s hard to imagine a time with more uncertainty than now – we are bombarded with messages about the technology that will disrupt our field and young generations that will turn our workplaces and work practices upside down. We end up trying to follow practices of those who seem to be already ‘living in the future’.

Many procedures and artefacts (like an office) become rational myths – taken for granted, accepted on faith.

And sometimes you win too much…

It’s fascinating how most of our work a couple of years ago circulated around convincing managers that a more open, flexible and collaborative environment will help them achieve their objectives. However once activity based working became an accepted practice, I often needed to curb peoples’ enthusiasm. “They might actually need their own desks – that’s just the nature of their work” or “well, they really need more places to focus and to have confidential conversations” I would say.

And it’s absolutely natural and rational to think in this way. People want their organisations to be legitimate and accepted. Companies need to be deemed authentic in order to secure resources, whether it is talent or clients, inhabiting a modern office is an important element of building that image. A bean bag, some couches and the informal meeting space became what marble and Greek columns used to be in the earlier years – a legitimising factor.

It reminds me of the famous ‘just in time’ inventory processing method originated in Toyota and copied widely across the globe – sometimes for its high efficiency and sometimes just because it was what investors expected. There were numerous stories of companies announcing just in time process implementation, while secretly using the old supply chain organisation methods and hiding warehouses.

Even in our field we fall prey to the ‘normative isomorphism’, being almost afraid to run a project without the holy trinity of: space utilisations study, employee survey and managerial interviews. We all need to present ourselves as professional and as serious business people.

But it is important to look beyond that, to question the accepted norm, sacred rituals of modern office design and not to accept it at the face value but actually use critical thinking and pick what works from the gospel.

Create Your Own Version of Google

Creating an office environment that reinforces a strong professional image and is also a magnet for young talent are both valid goals. Being able to say we have implemented activity-based working may be great for the company’s image, but there is so much more value in actually embracing the idea.

Looking into how employees work, how the company functions and who collaborates with whom, can lead to productivity, innovation and engagement breakthroughs. Implementing elements of flexible working without embracing its philosophy is a little like buying a Ferrari and never driving it faster that 30 mph – it might look  impressive, but what a waste of potential.

The latest issue of Insight is now available to view online Employment confidence is increasing, but so is the pay divide finds CIPD