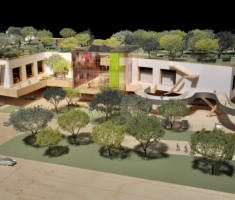 Normally it would strike you as a bit odd that a company would appoint one of the world’s most high profile architects to design its new headquarters, a man with an immediately recognisable and frequently stunning visual style, only to then ask him to rein it all in and produce something pretty sober and unobtrusive. But that is precisely what Facebook has done with the appointment of Frank Gehry who has been tasked with producing a low key design for its new headquarters building  and campus in California which gained approval at the end of last week.

The new home for the social media giant is situated directly opposite the site of its current HQ, which was formerly the home of Sun Microsystems. The new building provides the first opportunity for Mark Zuckerberg to put his company’s stamp on its surroundings and what they have plumped for is a pared-down and sober rethink of the plans with which they were first presented by the architectural practice responsible for such unmistakeable landmarks as the Bilbao Guggenheim and the Walt Disney Concert Hall in Los Angeles.

According to local media reports, at the planning meeting between representatives of Gehry and the  local city council, Facebook wasn’t keen on the original plan to have a far more expansive design which included features such as building features that represented the wings of butterflies.  ‘They felt some of those things were too flashy and not in keeping with the kind of the culture of Facebook, so they asked us to make it more anonymous’, said Gehry representative Craig Webb. 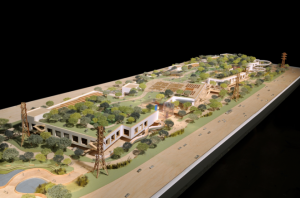 The new building will provide over 400,000 sq. ft of space as part of a 22 acre campus as a home for 3,400 employees. Although far from ostentatious, the new building will still incorporate striking features such as rooftop gardens which may also include trees. Most of the building will not exceed 50 feet in height and will be carefully landscaped with underground parking. ‘Frank was quite willing to tone down some of the expression of architecture in the building. Our intent is that it almost becomes like a hillside, with the landscape really taking the forefront,’ according to Webb.

There is always a great deal of interest in the design of buildings for the world’s major technology companies. Certainly few other sectors could demand the column inches devoted to Yahoo’s decision to end homeworking, nor to the design for the Google’s new US campus or the firm’s commitment to new offices in London. But this is perhaps the first time talk has been of how low-key the approach is. It’s also something of a first for Gehry although may not be surprising as a reflection of the personal tastes of Mark Zuckerberg who is rarely seen in anything more flashy than a pair of jeans and a sweat shirt.

More documentation and plans for the new building can be seen here.

Office design goes to the movies. Part 4 – Ikiru Video: one of the keys to a productive workplace: micro-organisms?