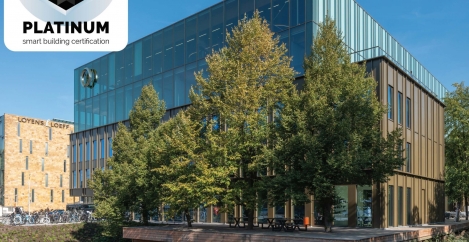 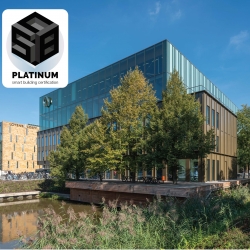 EDGE Olympic Amsterdam has been called the smartest building in the world since its launch in 2018. It surpassed its predecessor The Edge also built by EDGE, formally OVG Real Estate. The building combines technology for building utilisation, operations, environment, and sustainability with many touch points for its building’s occupants. EDGE scored especially high in building environment and building performance (sustainability) technologies, two areas EDGE has been known to excel in. The platinum certification also puts EDGE in the running to officially be named the Smartest Building in the World.

‘After developing The Edge in 2014 we set out to further optimize the technology used to create a foundation for a next generation of sustainable and healthy buildings. EDGE Olympic is the first model of this new generation and we are pleased to receive the first Platinum Certification for this office. It proves that our industry is taking the role of buildings in our lives more and more serious.’ -Coen van Oostrom, EDGE

The EDGE Olympic also has a ‘digital twin’, a copy of the entire building and its use in digital form. A collaboration with Microsoft has enabled a digital twin integration into the certification platform.

‘Certifying a smart building creates an essential baseline against which you can measure the benefits of your investment in ‘smart buildings’ technology. Furthermore, by working together with technology companies, construction companies, building developers, owners and tenants can better appreciate the ‘art of the possible’, identifying appropriate solutions and influencing the application of new digital technologies to ‘own’ the future of their industry.’ – David, J. Williams, Microsoft.

This certification lands on the 400th anniversary of the first smart building. In 1620 Cornelis Jacobszoon Drebbel, a Dutch engineer and inventor created a chicken coop which automatically regulated airflow and temperature to increase egg production. The certification of a Dutch building on the anniversary seems an appropriate way to celebrate.

A recent article in MIT Sloan Management Review authored by executive board member Professor Ethan Bernstein, from Harvard Business School, posed the idea of collective intelligence. “…to deepen our shared understanding of what that term (smart) stands for by combining human and device intelligence — and continually experimenting — to improve our collective intelligence. That’s ultimately what will make our buildings smarter, because it will also make us smarter.”

Dr. Bernstein’s well known work in employee behavior and performance are now being applied to a current COVID scenarios and could support the idea of requiring buildings to become smart at least from a health and safety perspective. This emphasis was reinforced by the CTI of Colliers International: ‘We strongly believe a transformation is taking place in the way we look at and manage buildings. The Smart Building Certification’s approach towards safer, healthier, more sustainable, and higher-performing real estate is a shift we embrace and expect to see more of in the future.’ – Bas Ambachtsheer, Colliers International

Does this mean the first smart mortgage is coming? Following in the footsteps of the first green mortgage many financial institutions recognize the need for adjusted valuations of buildings as well as different/better financial terms. ‘We see the value in smart buildings and have been working for some time to incorporate smart in our process. Solutions like SBC can help enable increased valuations by quantifying the added value of the building.’ – Hein Wegdam, Director Sustainable and Innovative Real Estate Products, ING

Smart Building Certification was founded by Elizabeth Nelson, Nicholas White and Wouter Truffino in February 2020 as an initiative to establish an honest and independent platform that appraises buildings all around the globe on the basis of how smart they are. The Smart Building Certification is: ‘Founded in Science, refined in practice and constantly optimized by our network of experts’. The certification has a strong foundation in academic research and partnerships as well as a what is growing to be the largest network within the smart building space.

Business leaders are overestimating their organisational agility capabilities Furlough scheme should be extended ahead of the Budget, says CIPD