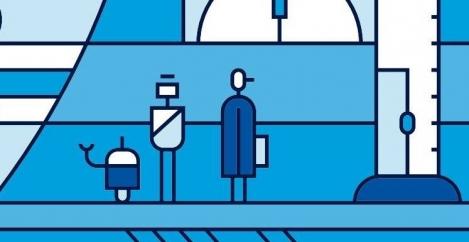 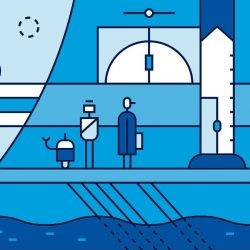 The world is going through a workplace revolution that will bring a seismic shift in the way humans work alongside machines and algorithms, according to new research by the World Economic Forum. By 2025 more than half of all current workplace tasks will be performed by machines as opposed to 29 percent today. Such a transformation will have a profound effect on the global labour force, however in terms of overall numbers of new jobs the outlook is positive, with 133 million new jobs expected to be created by 2022 compared to 75 million that will be displaced. The research, published in The Future of Jobs 2018, is an attempt to understand the potential of new technologies to disrupt and create jobs. It is also seeks to provide guidance on how to improve the quality and productivity of the current work being done by humans and how to prepare people for emerging roles.

Based on a survey of chief human resources officers and top strategy executives from companies across 12 industries and 20 developed and emerging economies (which collectively account for 70% of global GDP), the report finds that 54% of employees of large companies would need significant re- and up-skilling in order to fully harness the growth opportunities offered by the Fourth Industrial Revolution. At the same time, just over half of the companies surveyed said they planned to reskill only those employees that are in key roles while only one third planned to reskill at-risk workers.

While nearly 50% of all companies expect their full-time workforce to shrink by 2022 as a result of automation, almost 40% expect to extend their workforce generally and more than a quarter expect automation to create new roles in their enterprise.

A vision of work 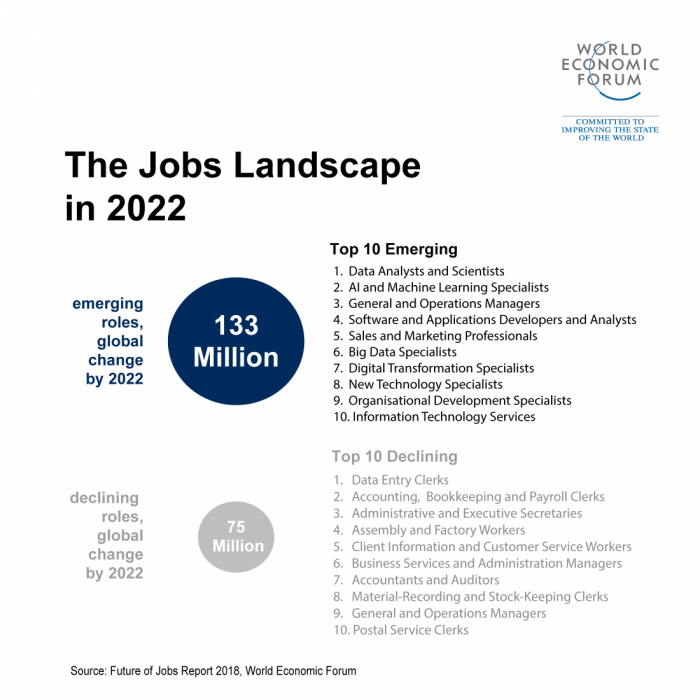 The report presents a vision of a future global workforce that provides grounds for both optimism and caution. Compared to a similar study by the Forum in 2016 to understand the impact of the Fourth Industrial Revolution on jobs, the outlook for job creation today is much more positive as businesses have a much greater understanding of the opportunities made available by technology. At the same time, the huge disruption automation will bring to the global labour force is almost certain to bring with it significant shifts in the quality, location, format and permanency of roles that will require close attention from leaders in the public and private sector.

“It is critical that business take an active role in supporting their existing workforces through reskilling and upskilling, that individuals take a proactive approach to their own lifelong learning, and that governments create an enabling environment to facilitate this workforce transformation. This is the key challenge of our time,” said Klaus Schwab, Founder and Executive Chairman of the World Economic Forum.

Among the set of roles set to experience increasing demand across all industries are data analysts and scientists, software and applications developers, and ecommerce and social media specialists, all of which roles that are significantly based on or enhanced by technology. Roles that leverage distinctly ‘human skills,’ such as sales and marketing professions, innovation managers and customer service workers, are also set to experience increasing demand. Jobs expected to become redundant include routine-based white-collar roles, such as data entry clerks, accounting and payroll clerks.

Within the set of companies surveyed, respondents predicted a decline of 984,000 jobs and a gain of 1.74 million jobs between now and 2022. Extrapolating these trends across those employed by large firms in the non-agricultural workforce of the 20 economies covered by the report suggests that 75 million jobs may be displaced by a shift in the division of labour between humans, machines and algorithms, while 133 million new roles may emerge that are more adapted to this new division of labour.

While we expect net positive job growth, there will be a significant shift in the quality, location, format and permanency of new roles. In fact, businesses are set to expand their use of contractors doing task-specialized work, engage workers in more flexible arrangements, utilize remote staffing, and modify the locations where their organization operates to ensure access to talent.

All industries expect to have sizeable skills gaps, with average skills instability of 42%, highlighting the scale of the challenge in preparing today’s workers for changes within their current roles and the emerging jobs of the future. Technology proficiency, such as technology design and programming, and distinctly human skills, such as creativity, critical thinking and persuasion, are among the competences that will be sharply increasing in importance. 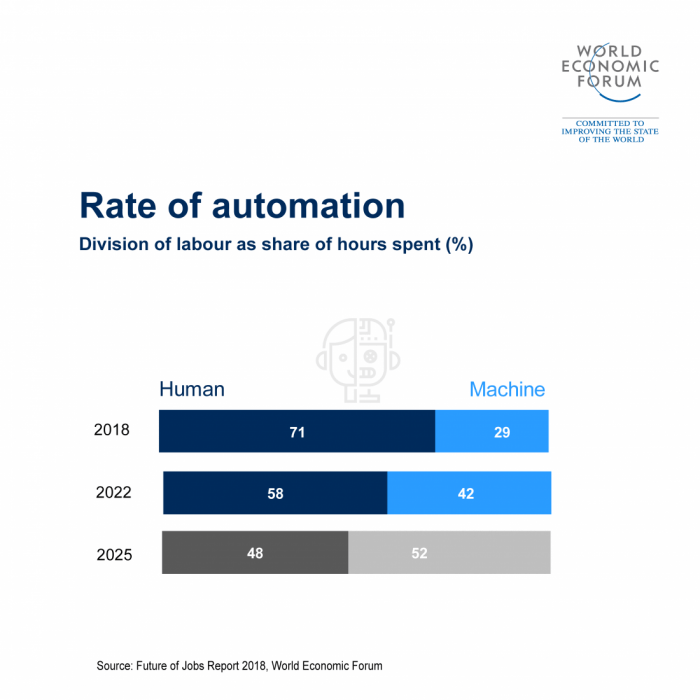 “Companies need to complement their automation plans with comprehensive augmentation strategies. For businesses to remain dynamic, differentiated and competitive in an age of machines, they must in fact invest in their human capital. There is both a moral and economic imperative to do so. Without proactive approaches, businesses and workers may lose out on the economic potential of the Fourth Industrial Revolution,” said Saadia Zahidi, Head of the Centre for the New Economy and Society at the World Economic Forum.

An augmentation strategy takes into account the broader spectrum of value-creating activities that can be accomplished by workers, machines and algorithms in tandem. Fulfilling this potential will require workers to have the appropriate skills for the workplace of the future, and will require business and policymakers to lead complementary and coordinated efforts to invest in human capital.

Respondents reported three main strategies for coping with the challenges of the new world of work: hire wholly new permanent staff with the skills relevant to new technologies; automate work tasks completely; and retrain existing employees. A smaller but significant number of companies expect to allocate the work to specialist contractors, freelancers and temporary workers.

While large-scale, multistakeholder action will be needed to tackle existing and impending skills needs, 85% of companies reported that they plan to rely mainly on internal specialized departments within their organization to provide reskilling opportunities, compared to half expecting to work with public education institutions. Only 34% of the training to be delivered directly by employers is expected to result in an accreditation recognized outside of the company in question.These findings highlight both the future role of companies as learning organizations and the range of untapped reskilling and upskilling collaboration opportunities.

The Future of Jobs Across Industries

The future of jobs is not singular, and disparate impacts will be felt across industries depending on initial starting conditions, skills availability, technology adoption and adaptability of the workforce.

While there is an overall net positive outlook on the future job market, the balance of workforce expansion and contraction looks different across industries. The level of displacement is expected to vary considerably. For example the share of companies projecting jobs losses in the mining and metals, consumer and information and technology industries is higher than companies in professional services. Declining roles and skills in one industry are growing in other industries. These findings point to potential opportunities for coordinated job transition strategies across industries.

All industries expect to have sizable skills gaps, with the Aviation, Travel & Tourism industry projected to have the highest reskilling needs in the 2018-2022 timeframe. Skills gaps are also a particular concern in the Information & Communication Technology, Financial Services & Investors, and Mining & Metals industries. The broad mobility sector is least likely to look to reskill their current employees, while business leaders in the Global Health & Healthcare, Chemistry, Advanced Materials & Biotechnology sectors are most likely to retrain their workers.

“Knowing which occupations are growing and declining globally is a starting place for policymakers, educators, and employers to start conversations on how to transition the global workforce to the jobs and skills of tomorrow,” says Allen Blue, Co-founder of LinkedIn. “To help people connect to economic opportunity on the individual level, it’s important to map and understand today’s labor market dynamics at scale.”

If managed well, a combination of reskilling and the augmentation of a range of tasks today can create the opportunity for new, higher productivity growth. For example, administering and physical tasks are projected to be significantly replaced by mechanized labour, leaving room for humans to focus on higher productivity tasks.

The Future of Jobs Across Regions

The impact of automation on jobs will also vary across countries and regions, especially as global companies consider a number of strategic factors in choosing where to locate specific job roles and economic activities. 74% of companies cited the availability of skilled local talent as their foremost consideration in determining job locations. More than half of companies surveyed for this report expect that by 2022, they would consider adjusting the composition of their value chains in response to the adoption of new technologies, and just under half expect to target new talent by modifying the location of their operations. These findings point to the potential impact of workforce management strategies on the geography of jobs across the global economy.

The report finds variation among the demand for roles across regions. Region-specific roles expected to be in growing demand include Financial and Investment Advisors in East Asia and the Pacific and Western Europe; Assembly and Factory Workers in Latin America and the Caribbean, Middle East and North Africa, South Asia and Sub-Saharan Africa; and Electrotechnology Engineers in North America. Across all countries and regions, employers expect that significant reskilling will be needed by a large share of the global workforce over the 2018-2022 period. Remaining competitive in a global context and taking advantage of emerging job creation opportunities will require a well-skilled local workforce bolstered by national lifelong learning ecosystems.

Shaping a Human-Centered Future of Jobs 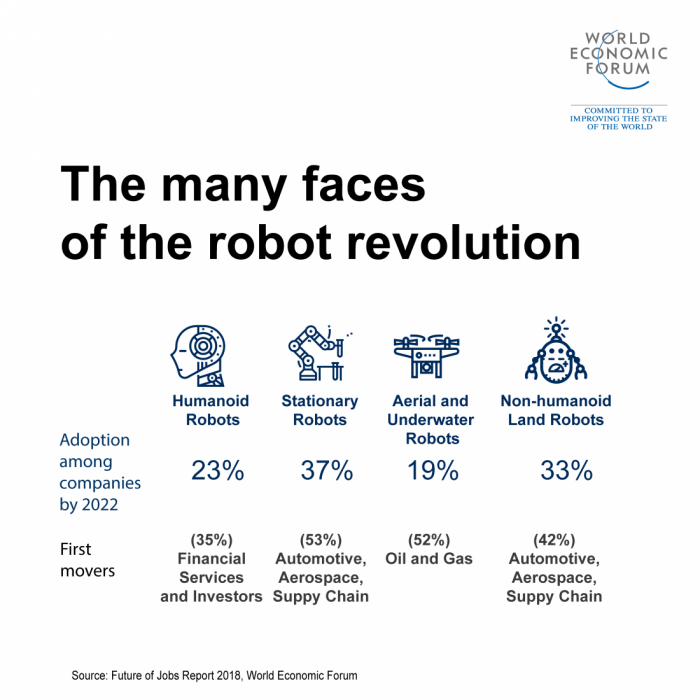 Harnessing the transformative potential of the Fourth Industrial Revolution will require coordinated efforts among stakeholders in all industries and regions to formulate a comprehensive workforce augmentation strategy ready to meet the challenges of this new era of change and innovation. Business, government and workers must proactively plan and implement a new vision for the global labour market.

For governments, there is an urgent need to address the impact of new technologies on labour markets through upgraded education systems aimed at raising both technical and soft skills among the future workforce; social policies aimed at supporting an ecosystem of lifelong learners; safety nets for managing the social impact of workforce transformations; and stimulating job creation taking into account local and global demand for emerging roles and skills. For industries, it will pay to support the upskilling of their current workforce toward new and higher-skilled roles as competition for skilled talent intensifies and becomes more costly over the coming years. Industries will also need to consider how these efforts may also apply to the gig, temporary and online workforces they increasingly plan to rely on. For workers, there is a need to take personal responsibility for their learning trajectory through the current transition and developing a higher degree of comfort with the concept of lifelong learning.