Increasing adoption of serviced offices within the corporate sector 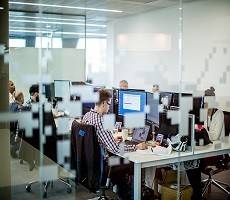 Serviced offices have been viewed as the preserve of start-up businesses, rather than as a solution to the workspace needs of companies. However, with the growth in popularity of cluster and co-working spaces, that is changing. New research, admittedly by a global broker of serviced office space, Instant Offices, indicates the increasing acceptance of serviced office solutions within the corporate sector, ranging from SMEs through to FTSE 100 / Fortune 500 companies. Alongside that, the cost of desk space in serviced offices has grown by double figures across the UK in the past year, rising by 3.6 percent, in addition to an 11.4 percent increase in desk rates. Growth in the number of such spaces across Central London was as high as 17 percent in Southbank and 11 percent in the West End during 2014.

Unsurprisingly, given the record uptake of office space in the Capital, the serviced office sector in London continues to outperform other markets across the country, with Greater London now comprising 30 percent of the national market. Central London, the City, West End and Southbank have all seen serviced office centre growth of over 10 percent.

Tim Rodber, CEO of The Instant Group, said: “The average rates in the capital have risen beyond levels previously seen at the height of the pre-recessionary market in 2008.  This consistent growth provides further evidence of the increasing adoption of serviced office solutions among entrepreneurs and companies nationally.”

However, elsewhere in the UK, nearly all of the largest markets have experienced growth with respect to new centres, and corresponding increases in average workstation rates year on year.

The Manchester market has increased by 9 percent, with workstation rates increasing by 5 percent. Aberdeen, Bristol, Glasgow, Edinburgh, Belfast, and Cambridge have also shown significant increases in both serviced centres and desk rates compared to previous years.

Tim Rodber added: “We have noticed an increasing trend for some corporate clients to secure serviced offices following identification of suitable space in advance of their required occupation date, a further indication of a buoyant market.”