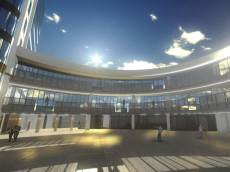 Render of Plaza at Zappos offices in LA

Greg Lindsay is a journalist and urbanist. He is a contributing writer for Fast Company and co-author of the international bestseller Aerotropolis: The Way We’ll Live Next as well as a visiting scholar at New York University’s Rudin Center for Transportation Policy & Management, a senior fellow of the World Policy Institute, and a research affiliate of the New England Complex Systems Institute. He is also one of the main speakers at this year’s Worktech conference in London on 19 and 20 November. In this frank and enlightening interview he offers his thoughts on how firms can engineer serendipity into their workplaces and cultures and how the way we design offices is already taking clues from the way we plan urban environments.

Insight: You claim to be something of a neophyte when it comes to the workplace but every aspect of your work touches on it in one way or another. Are you being disingenuous or just modest?

Greg Lindsay:  Neither. My work touches on the workplace in many ways, but it is generally not the aspects of the workplace you cover so well on Insight. I work as part of a think tank that looks at the future of work and I’m aware of how work integrates with everything around us. We know for example that cities are the places where ideas are spawned and we understand the processes involved thanks to the work of people like my fellow Worktech speaker Frank Duffy.

Insight: So what do you think are the most important things we could be doing better to make work more productive, creative and enjoyable?

GL: We often start from a flawed or narrow perspective. So if you take something like an org chart, which is how many organisations visualise themselves, you begin from a false point. It’s a terrible approximation of how work gets done and how people interact with colleagues and the organisation.

Insight: So what is the alternative perspective and how does this manifest itself in terms of office design? 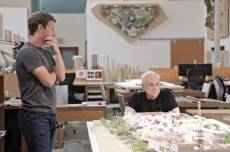 GL: Unquestionably the best new office designs are those which create unforeseen encounters in much the same way as we see in an urban setting. There are a number of ways of doing this. Facebook for example is looking to create this type of workplace by essentially putting everybody in one big room at its new HQ. That is essentially the vision of Mark Zuckerberg. Even though he hired Frank Gehry to execute it, Zuckerberg already knew what he wanted from the workplace. And you can see the thinking behind what they’ve done up to a point. But it relies on an assumption that, when it comes to bringing the right people together in the right ways, that you know who the right people are to begin with, even if you have designed flexibility into the layout of the offices so they are able to change quickly as a way of creating new interactions. So I’d say there are better ways of maximising the chances of the right interactions happening in practice.

Insight: And how do you see that working?

GL: The challenge is how we use offices to engineer serendipity.  This is not about the creation of any supposed watercooler moments but something far more sophisticated. It’s about creating an informal assemblage and one in which one of the more interesting and productive aspects is how technology is applied. You have to figure out what and where the organisation’s networks are, both those inside the office and those outside. This is where I think the Facebook solution falls down because what they’ve done is created a single plane on which people work and then waited. What they are suggesting is that all you need to bring people together is to give them coffee.

Insight: Are there example of firms who have got things right?

The inverse relationship between distance and interaction

GL: Yes, albeit with the obvious caveat that what works as a feature in one place won’t necessarily work in another. But you can see shared principles.  One is about how you use the data about how people work and interact. One of the points of reference I always return to in this regard is the work Tom Allen did at MIT in the 1970s, particularly in establishing the principle that there is an exponential drop in the frequency of communication between people as the distance between them increases. Nowadays we might see that in terms of technological as well as physical distance but the central point remains valid.

So the important thing is about how you cut the distances between people, however you define distance, optimise for value and organise the various aspects and networks of the workplace accordingly. There is a great opportunity for professions like FM and HR here and I’m not sure they are making the most of it. Well actually I am sure. They are missing out and they need to look into their opportunities more.

Insight: One of the main focuses of your work is the role of work in an urbanised world and you said earlier that you believe office designers can learn from how people interact with work and each other in an urban setting. How does this thinking manifest itself in practice?

GL: Well, we’re fortunate that we can see how this works right now. Take the Amazon campus in Seattle, in which there are huge similarities in the way work takes place outdoors and indoors, with each type of setting inspiring the other. It’s possible to create a workplace that mirrors the way the city inspires creativity and brings people together in a form of structured chaos, creating the kinds of casual collisions that are so important to those wanting to engineer serendipity. This in turn is informed and shaped by technology.  So people can find each other using social media, especially the new generation of  ‘social discovery’ apps such as Grindr and Tinder, which find, match, and pair people using an individual’s smartphone GPS.

You can even see this process happening with the plans for the new Google offices in London. The building itself is built with as few floors as possible because the floors of a building are the enemies of serendipity. But then so too is a rigid workplace structure that encourages people to stay in one place for eight hours a day. Instead you need a horizontal environment that mimics the city outside which encourages people to interact with each other.

Another great example of how this works is with the design of the new offices of Zappos in Las Vegas. I know they are not so well known in the UK, but they are a huge US footwear corporation. The CEO of Zappos, Tony Hsieh, has described how he wants the new offices to be intentionally inconvenient for the people working in them. He doesn’t want people working from home. He wants them to interact in beneficial ways. He believes in what he calls “the three Cs: collisions, community, and co-learning.” You don’t get the last two without a happy accident first.

Greg will be one of the main speakers at this year’s Worktech London conference which takes place on the 19 and 20 November at the British Library. Tickets are available with a discount for Insight readers here.

Technology fix. What employers can do when social media becomes an addiction Employers advised to take a more preventative approach on Stress Awareness Day