Many of the notions that underpin the business case rely on an assumption that the world in 2033 will be largely as it is now and that passenger numbers will continue to grow indefinitely over that period, up 79 percent from a 2010 base.  What this means in practice is we must assume that in twenty years time a completely full 500 seat high speed train will travel between London and Leeds/Manchester every 4 minutes in each direction for 15 hours, 350 days per year.

If that doesn’t happen, the business case starts to unravel. For example, the rail industry’s own figures show that currently in the evening peak out of Euston the loadings on trains are around 50 percent and are much lower than that at other times. Assumptions of compound growth in passenger numbers over two decades may not turn out to be true. There is even a precedent. The passenger numbers on HS1 in Kent are out by a factor of a third on those projected, a fact that has left the taxpayer with an additional bill of £10 billion according to a National Audit Office report.

Nevertheless, the new assumptions about passenger numbers at least mark some progress on the original claim in the HS2 business case that nobody works on trains. This ludicrous idea was upheld for several years before it was finally discarded, but it marked HS2 out as a project that politicians and the rail industry were anxious to make happen regardless of how flimsy or even delusional the arguments were.

Having discarded the bizarre notion that nobody works on trains, the next piece of pure fantasy turned out to be an assumption in a KPMG report into the economic benefits commissioned by HS2 Ltd that the only constraint on commercial activity is transport infrastructure. By assuming that each of the areas served by HS2 had a limitless supply of property, talent and other resources, KPMG was able to argue that the economic benefits of the new line would be £15 billion a year. This remarkable notion was soon put to the sword by economists but the report is still used to a certain extent by proponents including the hapless Transport Secretary Patrick McLoughlin, who I’m informed is one of the good guys but always comes across as desperately unhappy that he’s been given the task of selling a project about which the public remain deeply sceptical.

There are other questionable assumptions made in the new business case as well as strong arguments for HS2, especially in the case of Birmingham, but they are beyond the scope of one feature.

Yet one issue that tends to be overlooked is the wisdom of investing so much money in a single piece of infrastructure over such a long period of time. We are essentially planning to land this train in the future based on an apparent belief that the world and its working culture will be largely the same as it is now or, at least, will change in predictable ways.

It’s fairly easy to test the wisdom or folly of such an assumption by looking back over the same period and judging just how much has changed since 1994. Of course, what we find is that there are things about the way we work that have changed not only beyond recognition, but in ways we could never have predicted. Not only that, we are told that this train will exist for 150 years and the idea of spending tens of billions on an inflexible project for the the world of 2164 seems even more remarkable.

This is one of the themes picked up by a new survey from the Institute of Directors. (Incidentally, if the members of this organisation are opposed to a scheme that transfers tens of billions of public money to private hands, then questions need to be asked about the project.) The IoD report raises the all important question of the impact of disruptive technology on the viability of HS2.

They may not do so in the simplistic and slightly misguided way that suggests we don’t really need to travel at all anymore because we can all videoconference instead. We already understand that people will only go along with that notion to a degree and that both organisations and individuals need people to meet up at times. But there is little doubt that changes to the way we work, communicate and interact will come about as a result of new technology. We just don’t know how and to what extent.

Instead the IoD report argues that ‘as anybody who made investments on the back of their belief in Betamax or the MiniDisc will know, even the best laid business plans can fall down when disruptive technologies emerge unexpectedly. The HS2 Ltd Economic Case and the conclusions of the KPMG report, are particularly vulnerable to such disruptive technologies, as they do not consider hypothetical developments in transport infrastructure.’ 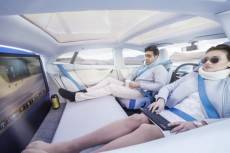 The IoD cites the example of disruptive transport technologies that will skew the assumptions behind HS2 including driverless vehicles (which is new technology and could possibly function as a self-driving personal office) and lift sharing websites (existing technology used in a new way) such as BlaBlaCar which has proved such a hit in France that the chairman of French rail operator SNCF has identified it as one of the greatest new threats to his business. BlaBlaCar is now in the UK.

And, of course, the report is only touching on one aspect of technology. Similarly disruptive technologies will change the way we work and travel in many ways, often in unforeseen ways. It is this that makes HS2 look such a momentous gamble. As a long term  megaproject,  it lacks the one thing it needs – options. As Rory Sutherland pointed out in his Spectator column recently HS2 doesn’t leave many choices for those who have to manage it in the future. It can’t offer choices about where it stops and how it works because then it wouldn’t be high speed anymore. 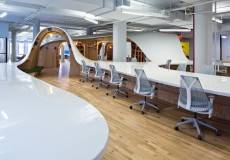 This aspect of the HS2 debate will be familiar to facilities managers. When I shared recently this story from the New York Times about the creation of an office-spanning desk that can seat 125 people, designers and architects swooned and FMs asked what would happen when you needed to adapt the workplace in the future. The answer of course is that you don’t. You work around it or get rid of it. Which is a damn sight easier with a big desk than it is with Europe’s biggest infrastructure project which will undoubtedly reshape the UK, but quite possibly not in the right way.