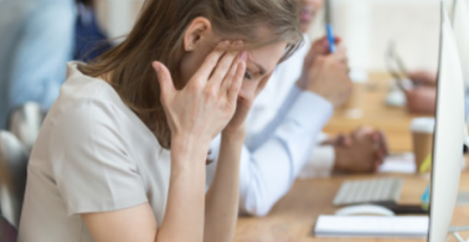 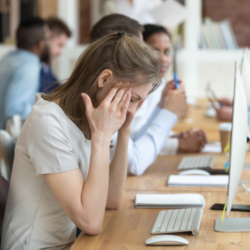 A new survey conducted by Just Eat for Business, asked workers about their workplace behaviour, stress levels, mental health and job satisfaction, to get an idea of what Brits’ working lives look like and how they can be improved through a focus on employee wellbeing. The survey claims almost one in ten (8.2 percent) UK employees admit to experiencing quite or very low levels of happiness while at work.

Of the workers which reported feeling unhappy at work, the majority were managers, followed by administrators, CEOs, senior managers, accountants and consultants. Most surveyed workers worked from the company office, although a portion worked remotely.

The study also claims that more than two thirds (36 percent) don’t enjoy their current job role, but of the 64 percent of workers who do, the main reasons behind their job satisfaction was a good work-life balance, a strong relationship with colleagues, and a wide variety of work. For those who didn’t enjoy their job role, the biggest annoyances were admin tasks, a lack of work-life balance, negative company culture, or not liking the people they work with.

Despite colleague friction and a poor work-life balance resulting in a lack of job satisfaction for some, the survey suggests that the majority of workers felt they had enough free time to enjoy themselves alongside work, while 65 percent of people said they got on well with their peers.

“Leaders and managers need to be looking at the mental health and wellbeing of employees from a holistic standpoint.”

One major shift that has been seen due to the Covid-19 pandemic is a lack of adequate screen breaks, which could increase the incidence of workers feeling burnt out. Despite the Health and Safety Executive (HSE) recommending that those who look at a screen should take a 5-10 minute break every hour, the survey claims that almost half of employees don’t follow the guidelines, while 8 percent don’t take any screen breaks at all.

In a normal office environment Brits take natural screen breaks through socialising with colleagues or attending in-person meetings – but this ‘water cooler’ chat has become near nonexistent, meaning employees rarely leave their desks during the working day.

Comparing the results from a previous Just Eat for Business survey – that looked at how businesses were tackling poor employee mental health – to the recent findings showed that dips in mood are detrimental to employee wellbeing across the board.

In the last survey, which was conducted back in March, over a third of workers (34 percent) reported often feeling unmotivated at work, while 32 percent of employees often felt sluggish.

Claire Russell, Mental Health Coach, believes that “responsible businesses, leaders and managers need to be looking at the mental health and wellbeing of employees from a holistic standpoint, and taking into account a person’s ‘whole-being’ when it comes to encouraging employees to be healthier at work.”