Open-plan office workers need time out from the madding crowd 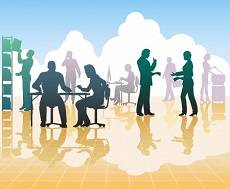 Open-plan offices are now the most popular workplace layout, primarily because they save on space, enable flexible working and, it’s argued, foster better communication and collaboration between employees. Yet open-plan still has some way to go to convince occupants of its merits. According to a recent study published in the Journal of Environmental Psychology, of over 42,000 US office workers in 303 office buildings, workers in private offices remain the most satisfied with their surroundings. However, what constitutes a satisfactory workspace differed, according to the employee’s current office layout. So while noise was the most important consideration for open-plan workers, light and ease of interaction topped the satisfaction list for those housed in cellular offices.

For the research, the study authors, Jungsoo Kim and Richard de Dear analysed the workers’ answers to the industry standard “Post-occupancy Evaluation” that asks them to rate their satisfaction with seven aspects of their office environment including: temperature, lighting, privacy and ease of interaction, plus it asked about their overall satisfaction with their personal workspace. Two thirds of the surveyed workers were based in open-plan offices (with or without partial partitions); a quarter had private offices; and a small fraction shared a single room with co-workers.

It’s not surprising that workers in open-plan offices expressed the strongest dissatisfaction with noise and lack of sound privacy – previous research, for example that by Pejtersen et al in 2006 found that ten times more people in open-plan offices complained about noise levels than those based in cellular offices.

But the cellular office is rarely now the best choice of planning model for various reasons, not least the desire to work in more flexible ways. Silent phones which light up rather than ring, coupled with soundproof headphones have been found to reduce noise levels, though this can lead to the opposite problem of virtually silent office floors where even a whispered conversation can be overheard. This is why office screens remain a key solution for many workplaces, to help break up endless rows of desks, absorb noise and provide a modicum of visual privacy for those who’d prefer not to stare into the eyes of their colleague opposite.

The inexorable adoption of the open-plan office looked set to be complete when even that last bastion of the cellular office adherent, the legal sector gradually began to adopt a more open-plan layout. But it seems adherents of the private office aren’t giving in entirely. When law firm Davenport Lyons moves into new premises in a couple of weeks, it will replace its previous cellular office layout for a more open plan arrangement, but significantly, it is not going entirely open plan, preferring to install what it calls a “semi-cellular space solution”.

In doing so it may be representative of a swing back to an approach to space planning that doesn’t assume that people work better in nakedly open-plan offices. If so, this has been coming for a while and has already been anticipated by a new generation of products that offer people a place to go where they can take at least some time out from the madding crowd and its noise and distractions, either to do some work alone or merely to have some peace.